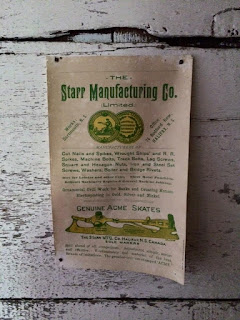 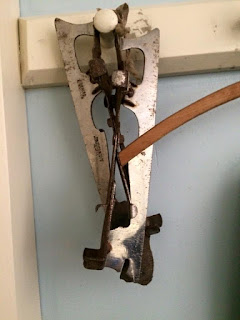 Every so often a blog begs to be written. Material jumps out at you in the most unlikely of places. In this case, it started with a book from The Heritage Trust Of Nova Scotia called "Rogers' Photographic Advertising Album, Halifax 1871" given to me by a friend with old advertising copy and photographs of the city I live in from the nineteenth century. What sealed the deal was my July visit to Sherbrooke Village, a living museum in Sherbrooke, Nova Scotia. While on a walking tour with friends, after tasting homemade buttermilk made the old fashioned way, we found a pair of Starr Skates hanging on a hook on the wall in the town jail. When we made our way to The Cumminger Brothers' General Store, we found a poster for the Starr Manufacturing Company advertising the same skates displayed on the wall. These coincidences, all within the course of a couple of weeks, convinced me it was finally time to sit down and write about an important part in skating history that hits very close to home. 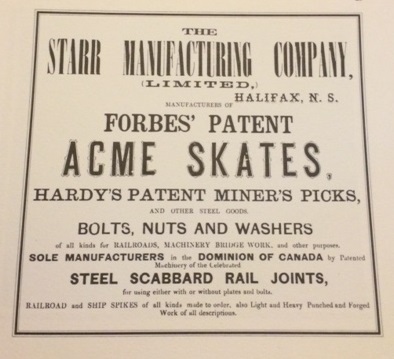 For those of you who have never even heard of John Forbes, Starr Skates or the Starr Manufacturing Company, I'm betting the term 'Halifax Skates' means little to you, either. However, back in the nineteenth century, it was John Forbes, who at the age of eight emigrated from Birmingham to settle in Nova Scotia with his family of artisans that completely revolutionized skate making. Before we get to just how he did this, I want to talk a little about what skates were like in the years preceding his inventions.

J. Keith Young's October 12, 1965 Chronicle Herald article "Acme Spring Ice Skates A First For Nova Scotia" (which I was able to track down in the form of a yellowed newspaper clipping in the archives of the Halifax Public Libraries) tells us that "for some three hundred years wood frame skates only were available with a screw in the skate going up into the heel of the boot and two leather straps for fastening. As can be imagined, hilarious accidents were rife when the boot-heel would break off or the straps break at a crucial time. The first all-metal skates followed with brass plates at the toe and heel with corresponding plates inset into the sole and heel of the boot. The plates engaged and locked with a pin and later improvements saw the heel-plate turned up as a lug at the back of the boot. In this latter style a metal nut was set into the back of the heel and a small thumb-screw passed through the lug into the nut, making for a fairly sturdy setup for skating. Nevertheless, customers of the day bemoaned the obvious shortcomings of the skates and young Forbes began thinking on how to improve the skates." 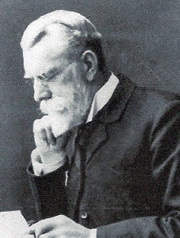 John Forbes actually worked as a young man as a clerk in a Halifax hardware store, where ice skates were a popular purchase for many in the unforgiving Eastern Canadian winters. Full of ideas as to how he could solve the quandary of unsatisfied customers, he left for the United States to gain machine experience and capital for his projected business. While below the border, war with the Southern states broke out and his return to Nova Scotia was hastened until 1860. From 1865 to 1868, Forbes patented four different designs of his Forbes' Patent Acme Skates, which would come to be known largely within Canada as Starr Skates, as they were manufactured by The Starr Manufacturing Company and abroad simply as Halifax Skates, because they (you guessed it) came from Halifax. Dartmouth if you want to get technical... but around these parts we don't like to give those folks across the harbour too much credit. I'm allowed to say that. I've lived over there.

Forbes' design was a variation and improvement of an all metal skate designed by one Alexander McMillan that was adopted in 1860 by the Skating Club of New York. McMillan's skate attached to the foot without the aid of straps or fastenings, with the heel fastening by means of an oval plate with a rectangular gripper. The toe part of the skate attached by clamp. In the case of Forbes' skates, no plates were needed and the skates could be easily adjusted to ones boot or removed with a single lever. The heel was actually fixed in length and the toe length was adjusted by means of a lever-clip mechanism. Simply put, for the time they were the best thing going... and they sold like hot cakes. 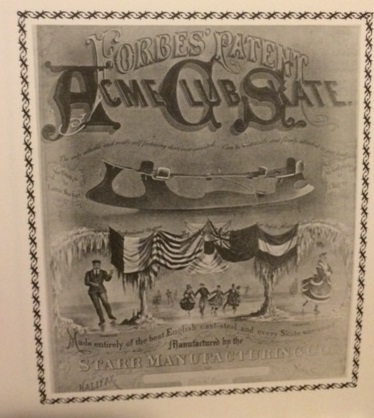 More than three million pairs were manufactured in Dartmouth and shipped all around the world from the most bustling harbour in Canada. Young's 1965 article further tells us that "governments ordered extra sizes for men on far-north expeditions who needed skates suitable for those wearing heavy boots large enough to fit over moccasins. In the year 1877 alone, some 100,000 pairs were marketed and the Forbes Acme pattern of 1871, with modifications, is still a favourite." Or was back then. More of those old pairs of Starr Skates like the ones I saw at Sherbrooke Village are still kicking around at antique stores and in dusty attics than you'd think though. Trust me.

Sadly, John Forbes passed away in 1915, but his revolutionary skates continued to be designed and marketed by The Starr Manufacturing Company well into the thirties. What I love about Forbes' story is that his revolutionary work in redesigning skates not only solved a problem (which is what every great invention should do) but it also made skating so much more accessible and enjoyable for so many people... and in the process put Nova Scotia on the map in the skating world. The best part? In just a few short months at the 2016 Canadian Tire National Skating Championships, the skating world will be returning its focus to this very area... and I can't wait to meet many of you in MY CITY! We'll have to take a trip to the Nova Scotia Sport Hall Of Fame where I can show you a pair of Forbes' skates in person. As Cicero once said, "To be ignorant of what occurred before you were born is to remain always a child. For what is the worth of human life, unless it is woven into the life of our ancestors by the records of history?"  I don't know about you, but I refuse to be ignorant.

Skate Guard is a blog dedicated to preserving the rich, colourful and fascinating history of figure skating and archives hundreds of compelling features and interviews in a searchable format for readers worldwide. Though there never has been nor will there be a charge for access to these resources, you taking the time to 'like' on the blog's Facebook page at http://www.facebook.com/SkateGuard would be so very much appreciated. Already 'liking'? Consider sharing this feature for others via social media. It would make all the difference in the blog reaching a wider audience. Have a question or comment regarding anything you have read here or have a suggestion for a topic related to figure skating history you would like to see covered? I'd love to hear from you! Learn the many ways you can reach out at http://skateguard1.blogspot.ca/p/contact.html.
Posted by Skate Guard Blog at July 22, 2015
Email ThisBlogThis!Share to TwitterShare to FacebookShare to Pinterest
Newer Post Older Post Home