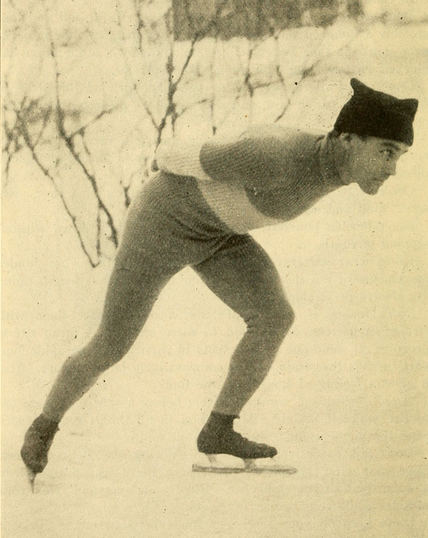 Norway's Axel Paulsen was one of very few skaters to navigate his way between the worlds of figure and speed skating with ease. A multiple time winner of the World Professional Speed Skating Championships, Paulsen was also the inventor of the difficult Axel jump which still bears his name today. As we know, he performed it on speed skates. America also had its own Axel Paulsen in Johnny Nilsson, a champion speed skater who was also a very fine 'fancy' skater in his own right.

Like Paulsen, the Minneapolis skater was also a repeat World Professional Speed Skating Champion, winning his titles in 1902 and 1903. The February 8, 1903 edition of "The Pittsburgh Press" offered a record of Johnny's second World Professional win in Montreal: "The feature of the day was the three-mile professional race, the finish of which was the closest ever seen in this city. Nilsson made the pace for more than two miles when he dropped back and McCullough, the former amateur champion of the world, took the lead, holding it to the turn in the finish, when Nilsson shot ahead and broke the tape at the finish four feet in front of McCollough. Three thousand people cheered loud and long while the champion circled round the rink and when he arrived at the tape bowing his acknowledgements he was literally carried off by his friends and admirers." His victorious win in Montreal was recorded for the "Living Canada" series by Pulitzer prize winning photographer Joe Rosenthal, who took the iconic "Raising The Flag On Iwo Jima" World War II picture. As a speed skater, Nilsson held records at the turn of the century in all races from a half a mile to five miles. As an interesting footnote, he wasn't the only Johnny Nilsson to be the world's fastest skater. Confusingly to my research for this blog, in 1963, Sweden's Jonny Nilsson won the World All-Round Speed Skating Championships in Karuizawa, Japan. 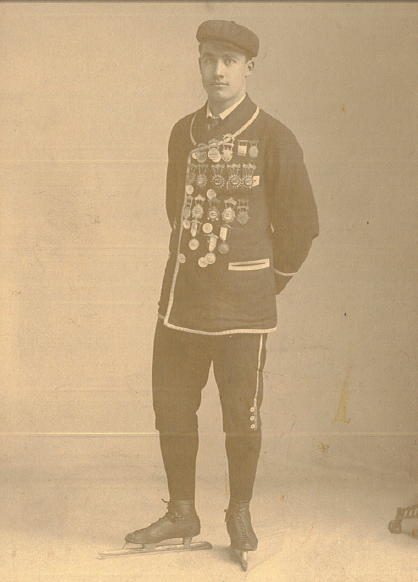 Big thanks to Bev Bayzant for providing this rare image of Nilsson from the McMaster University Archive Collection!

Johnny was allegedly every bit as good a 'fancy' skater as he was a speed skater. A revised copy of Frederick Toombs' book "How to become a skater" gives an account of his show skating expertise: "Nilsson probably never has had an equal, certainly no superior. Every imaginable 'stunt' of the fancy skater is at his command and he has originated a large number of startling feats. For example, he will approach a chair at full speed on one foot and leap completely over its back, landing on the same foot without losing his balance. Then again he will place three of four barrels side by side and jump over them, turning around in mid-air and landing with his face toward the barrels. A novel sight it is to see him run backward on the points of his skate. He goes round and round a circle with his feet in the spread-eagle position, increasing his speed without raising either blade from the ice."

Johnny was also an excellent oarsman, gymnast, tumbler, boxer, wrestler and sprinter. Even more interestingly, he was also quite the engineer. During his lifetime, he built three motorcycles, three automobiles and worked on developing an airship. He also was one of the contributing writers of the 1902 book "The Art Of Figure Skating". 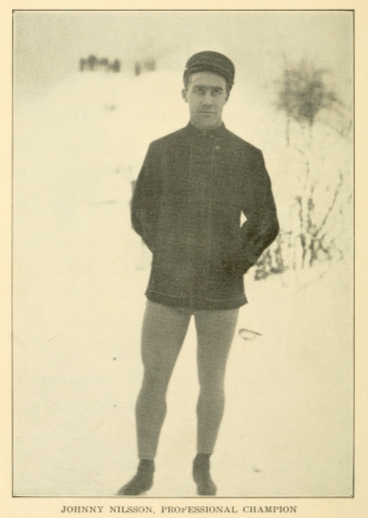 Johnny believed that his success was owed to his teetotalism, as referenced in Toombs' book: "Nilsson may well be described as a 'jolly good fellow.' His genial disposition has made him a prime favorite wherever he is known. He is a 'natural born' humorist, and witty indeed is the man that can turn the laugh against the champion... Nilsson believes that every skater should be temperate in his habits, and should indulge in a variety of exercises, so as to give himself good all-around muscular development. He never smoked a cigar or cigarette; nether has he ever indulged in intoxicating liquors. Therefore it is easy to understand how he has been able to uphold his supremacy for almost a decade." Whatever floats your boat, I guess. I'd much rather have a glass of wine and toast to Johnny Nilsson, the late, great, unknown American contemporary of Axel Paulsen.

Skate Guard is a blog dedicated to preserving the rich, colourful and fascinating history of figure skating and archives hundreds of compelling features and interviews in a searchable format for readers worldwide. Though there never has been nor will there be a charge for access to these resources, you taking the time to 'like' on the blog's Facebook page at http://www.facebook.com/SkateGuard would be so very much appreciated. Already 'liking'? Consider sharing this feature for others via social media. It would make all the difference in the blog reaching a wider audience. Have a question or comment regarding anything you have read here or have a suggestion for a topic related to figure skating history you would like to see covered? I'd love to hear from you! Learn the many ways you can reach out at http://skateguard1.blogspot.ca/p/contact.html.
Posted by Skate Guard Blog at August 03, 2015
Email ThisBlogThis!Share to TwitterShare to FacebookShare to Pinterest
Newer Post Older Post Home