From Carnations To Kale: The Curious History Of Figure Skating's Flower Throwing Tradition 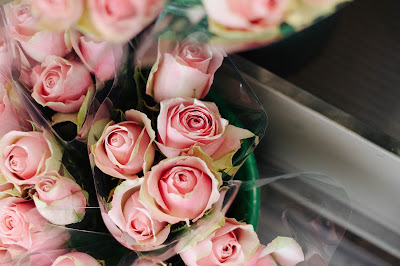 The tradition of throwing flowers on the ice at figure skating competitions was actually predated by the tradition of throwing shade. Back in the day, when things were being thrown, they were usually directed at the judges. At the 1952 World Championships in Paris, an unruly audience threw bottles at a judge who gave Jacqueline du Bief, who fell twice, a perfect 6.0. Four years later in Garmisch-Partenkirchen, when Sissy Schwarz and Kurt Oppelt controversially defeated Canadians Frances Dafoe and Norris Bowden, oranges were their weapon of choice.

But where did the tradition of throwing flowers to the skaters start? Perhaps inspired by the centuries old Japanese tradition of throwing clothing in tribute to Dengaku performers, for centuries it has been a long standing custom in the theater and dance worlds to throw flowers to artists that moved audiences. A wonderful 2012 article by Judith Mackrell from The Guardian explains that it was "a tradition apparently started by a man who bought boxes of old or spoiled blooms at markets, carried them to the top of the theatre, and then, with the help of other fans, threw them down on to the stage. Other fans threw flowers from the stalls, often weighted with lead or Plasticine to give a better aim. These cascades of carnations, daffodils and roses (depending on the season) would form a carpet at the dancers' feet." Theater directors hated it. The practice of throwing flowers to performers was actually banned in Viennese theaters in the nineteenth century as 'an intolerable nuisance.' The December 11, 1886 issue of The Garden asserted that English theatres were considering doing the same and that "thirty years ago, it is said, the directors of the Imperial theatres at St. Petersburg had a serious conference with Count Orloff as to the expediency of abolishing the offering of bouquets over the footlights." In addition to being a fire hazard with the gas lit lamps, these flower bouquets often contained jewels offered to female performers with the expectation of 'something more' in return. Scandalous!

As skating became more recognized for its artfulness and more competitions were held indoors in large stadiums, European audiences in the fifties and sixties started throwing flowers to skaters. It caught on in North America and blossomed as a part of the skating zeitgeist. Florists made a killing and soon the bundles of roses became too much for the skaters to gather on their own as they awaited their marks. Competitions got delayed; people tripped on rose petals more than their toe picks. Something had to be done. Enter the flower children.

These unheralded youngsters were more often than not young skaters from the cities in which competitions were held and hand picked by local organizing committees of events. Many top skaters got their first taste of the big leagues by picking up flowers. Among the list of former flower children? Olympic Silver Medallist Liz Manley was a flower girl at 1978 World Championships in Ottawa. Flower retrievers have increased in numbers over the years. At the Innsbruck Olympics, four young girls helped Dorothy Hamill gather flowers thrown by a crowd of nine thousand people. By the 1988 Olympics in Calgary, there were dozens.

But these kids weren't just picking up roses and carnations. Skaters have been showered with flowers, enormous plush toys, love letters, books and candy over the years. Katarina Witt received a Rolex watch; Jeffrey Buttle a Louis Vuitton bag. In a January 21, 2010 interview with ESPN, two time Olympic Silver Medallist Elvis Stojko claimed, "I've had lingerie thrown on the ice before. I remember at one competition the panties came out on the ice after my short program and the top came out the next night after the long program, with a phone number and name attached." After performing prior to a minor league hockey game in Reno, Nevada in 1997, Tonya Harding was thrown flowers... and collapsible batons.

Debi Thomas quipped that she wished people would throw pizza pie instead of flowers. She got her wish at the 1987 World Championships in Cincinnati. American Open Champion Doug Mattis told me, "I told her to look for me so I could get on TV. She came over and I handed her a full-on Domino's pizza, in box." No anchovies, extra cheese and to the kiss and cry in thirty minutes or less. Mattis recalled, "One year ('83, I think), they tied fishing wire to a bouquet of flowers and when (maybe it was?) Jill Watson went to go pick them up, they yanked them away from her. Another time someone built a three foot tall Energizer Bunny, put it on skates, and slid the thing past Holly Cook while she took a bow after her free skate."

It was all fun and games until skating officials stepped in. In 1988, the USFSA started discouraging the throwing of flowers onto the ice and cited the image the sport projected as part of the reason. Hugh Graham promised that "the TV interview area in competitions that we control will project a sporting image rather than a frilly flower garden." The delays of flower cleanup and hazards of foreign objects on the ice led organizers of the 1989 U.S. Championships to ban the selling of flowers at the Baltimore Arena. Fans responded by simply visiting their friendly neighbourhood florist on their way to the rink.

The boom of skating's popularity in the nineties meant more flower showers than ever before. At the 1994 Winter Olympics in Lillehammer, the flower children were instructed to "take lemon-flavoured cod-liver oil every day. And don't forget to smile", scan the ice for errant bobby pins, jewelry and sequins and return the skaters skate guards with "a grand bow." The skaters, aged seven to eleven, were hand-picked for their jobs by a German skater living in Norway named Heidi Vermond.

In 1996, the USFSA tried to bill organizers of the Riders Ladies Figure Skating Championships for a "sanction fee" of one thousand dollars per flower child for any skater who was a member of a USFSA club skating on to the ice to retrieve flowers at a professional competition. The organizers of the professional competition balked at the amateur organization's outrageous fee, countered one hundred dollars and then replaced the flower retrievers with skaters who weren't USFSA members. In the March 9, 1997 issue of the Eugene Register, Morry Stillwell said of the drama: "While somebody may feel that a little kid, five little kids, are not worth the difference between $100 and $1000, that's the way it is. I feel there is a moral responsibility to help develop the sport."

By the late nineties, the shift of federations and event organizers to 'encourage' fans to throw plush toys was in full swing. If flowers were to be thrown, they had to be fully wrapped in cellophane and taped up right some good. Safety first, right? Not so much. In 2008, legendary coach Frank Carroll got bopped in the head with a large stuffed penguin after Evan Lysacek's short program at the U.S. Championships in St. Paul Minnesota. In his interview with Allison Manley on The Manleywoman Skatecast, he said, "Actually, the one at Nationals was really dangerous because it had a recorder in it. It spoke or sang or did something and you know, the boy standing next to me was the Razzano boy from Phoenix and he had to skate right after Evan, so when Evan came off this thing flew down and luckily it hit me instead of him but you know, it really dazed me and I had to go to the medical afterwards." Not even an injury to the coach of Michelle Kwan could stop skating fans from chucking everything that wasn't nailed down.

Kale me crazy but I think the reigning World Champions might win the 'crazy things thrown on the ice' contest in recent years. Meagan Duhamel told me she "got a bundle of kale thrown on the ice last year at Canadians. I also got a jar of peanut butter many years ago." Not to be outdone, Eric Radford recalled being thrown "a six-foot long homemade stuffed snake!" 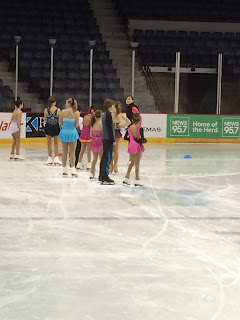 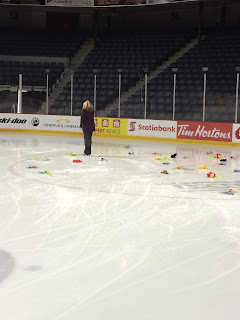 For a sneak peek into the world of flying projectiles, I headed over to the Scotiabank Centre today for the 2016 Canadian Tire National Skating Championships Flower Retriever Auditions. At the event, thirty skaters from the ages of nine to thirteen from local skating clubs auditioned for a minimum of twenty spots for 'flower retrievers' at the 2016 Canadian Tire National Skating Championships which will take place from January 18 to 24 here in Halifax. Skaters had applied online through a call for volunteers on Skate Canada's website. If they met the criteria, they were invited to today's tryouts.


An hour long process evaluated the skills of the skaters and their suitability through circuit exercises. Three judges made the difficult decision of who to select. I spoke to Jill Knowles, who has been the Executive Director of Skate Canada Nova Scotia since 2003 about the process. "They are looking for skating skills," she explained. "When we are live on TV, the skaters have to be very, very proficient. They have to be able to skate well, gather the flowers, stuffed animals and all those things in really quick succession. They also have to sit quietly when they're not in use because there is a lot of dead time where it will be interesting for them to watch the skaters, but they will have to sit quietly and behave themselves." We talked about how this really was a once in a lifetime experience for many of these young skaters. Jill explained that the "age window to be a flower retriever is quite small. The last time Canadians were hosted here was 2007. In 2007, many of these children wouldn't have even been in school yet, let alone skating. By the time we have Canadians here again or another international event they will probably be too old to be doing it at that point in time." As for crazy things thrown on the ice in Halifax, Knowles remembered Craig Buntin being thrown Tim Hortons coffee.

When the ice at the Dartmouth Sportsplex was littered with red roses after the last figures in international competition were skated here at the 1990 World Championships, it was probably one of the few times that school figures were ever rewarded with a flower toss. You honestly just never know what will happen in Halifax, home to some of the most lively skating audiences in Canada. Why don't you come find out for yourself? Tickets are on sale to the 2015 Canadian Tire National Skating Championships now!

Skate Guard is a blog dedicated to preserving the rich, colourful and fascinating history of figure skating and archives hundreds of compelling features and interviews in a searchable format for readers worldwide. Though there never has been nor will there be a charge for access to these resources, you taking the time to 'like' on the blog's Facebook page at http://www.facebook.com/SkateGuard would be so very much appreciated. Already 'liking'? Consider sharing this feature for others via social media. It would make all the difference in the blog reaching a wider audience. Have a question or comment regarding anything you have read here or have a suggestion for a topic related to figure skating history you would like to see covered? I'd love to hear from you! Learn the many ways you can reach out at http://skateguard1.blogspot.ca/p/contact.html.
Posted by Skate Guard Blog at November 16, 2015
Email ThisBlogThis!Share to TwitterShare to FacebookShare to Pinterest
Newer Post Older Post Home