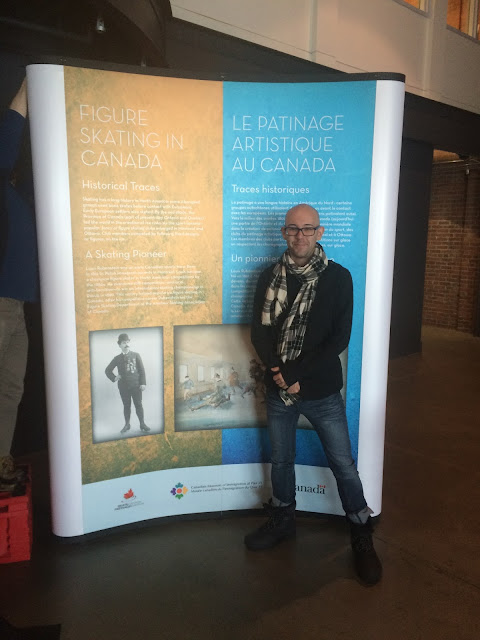 You really want to see someone geek out? Pump me full of the dark roast from Norbert's Good Food in the Halifax Seaport Market and let me fawn over figure skating memorabilia. Today, the delightful folks at the Canadian Museum Of Immigration at Pier 21 let me do just that.

I appreciate so much the staff at Pier 21 graciously taking the time out of their busy schedules to offer me a behind the scenes glimpse of the exhibit "Perfect Landings, Immigration and Figure Skating in Canada" which opens this Saturday in partnership with Skate Canada and runs through March 20. 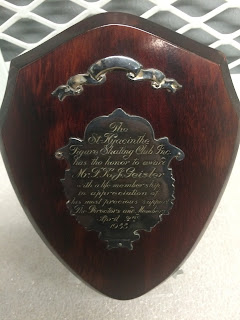 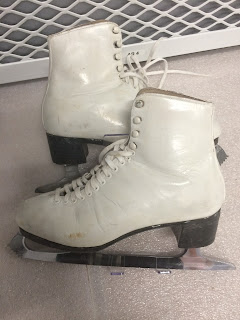 (L) Plaque presented to 1941 Canadian Waltz Champion F.K.J. Geiser by the St. Hyacinthe Figure Skating Club. Geiser was a German immigrant who served on the CFSA Board Of Directors for twenty years and made massive contributions as a Builder in Canadian figure skating, particularly in Quebec. (R) Skates made by Hungarian (Roumanian) cobbler turned skate maker John Knebli. Knebli and his beloved wife Elizabeth's business John Knebli, Ltd. made custom skates for a who's who of skating... Toller Cranston, Peggy Fleming, Liz Manley, Elvis Stojko and Brian Orser included. Barbara Ann Scott won her 1948 Olympic title in St. Moritz wearing skates made by Knebli. Photos used with permission of the Canadian Museum Of Immigration At Pier 21.

I don't feel I am overstating my enthusiasm one iota when I say that this exhibit is an absolute must see for skating history buffs. "Perfect Landings" focuses on the impact of immigrants on Canada's figure skating history. From lushly illustrated panels featuring skaters like Louis Rubenstein, Otto and Maria Jelinek, Hellmut May, Carole Jane Pachl and Ellen Burka to walkable floor patterns of school figures, the exhibit is curated in such a way that both those who know plenty about the sport's history and those who know little but are inspired to learn will be engaged equally. The memorabilia that will be on display is just stunning. There's a pair of skates that are over a century old that were designed right here in Nova Scotia by the Starr Manufacturing Company and another made by the late, famed skate maker John Knebli, whose first steps on Canadian soil were at Pier 21, the very site of the exhibit! It was incredibly cool to check out Petra Burka's 1964 Olympic gold medal and her sash from the 1965 World Championships. As I put on a pair of gloves and had a chance to hold Petra's medal from the 1964 Innsbruck Games, I joked to historian Erica Gagnon that this was the closest I'll ever be getting to an Olympic medal! We also had a chuckle over the iconic costume German born Victor Kraatz wore to skate his "Riverdance" with Shae-Lynn Bourne at the 1998 Nagano Olympics will be displayed as well. Deciding on how to much booty to stuff into the posterior of Victor's pants proved a major debate for the staff. In the end, they elected for a modest rump instead of the "sexy Flanders" look. 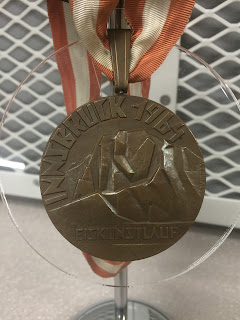 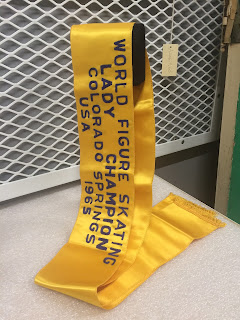 L-R: Petra Burka's bronze medal from the 1964 Olympic Games in Innsbruck and her sash from the 1965 World Figure Skating Championships at the Broadmoor in Colorado Springs. Photos used with permission of the Canadian Museum Of Immigration At Pier 21. 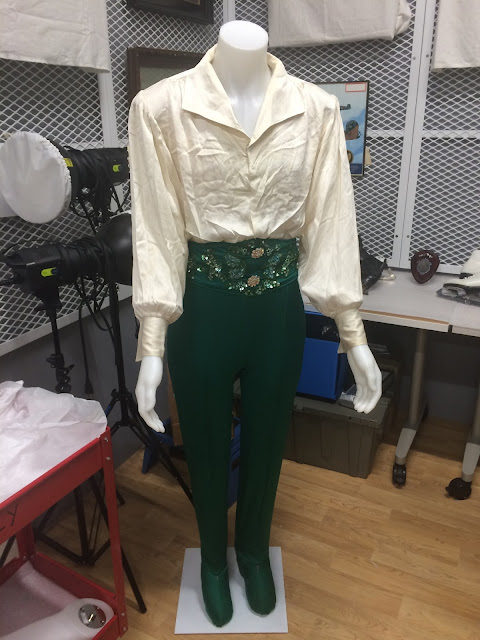 "Reel Around The Sun", anyone? We were all in agreement that the mere sight of the costume Victor Kraatz wore to skate his "Riverdance" is bound to stir up more than one 'discussion' about the judging at that competition. Yes, we're looking at you, Yuri Balkov. Photos used with permission of the Canadian Museum Of Immigration At Pier 21.

Historian Steven Schwinghamer and I chatted about why "Perfect Landings" is such a must see exhibit for those travelling to Halifax for the 2016 Canadian Tire National Skating Championships: "Halifax, I think, is a great location for the event. We've had the privilege of hosting a few major skating championships over the last couple of decades. Wish we could have more, but there is a track record - for example, the '90 Worlds - but there were also some other national competitions that were held here. But the history in this city goes deeper. You can go back to 1885, in the Public Gardens - in the Commons now we have the Oval - but there was ice waltzing, these big public events and people were crazy about it! This event helps people anchor the history not only of skating but of manufacturing with Starr Skates but it connects it with the larger tapestry. Not only with skating as a discipline in Canada [but with] the techniques, the training, even the tools of figure skating all being profoundly influenced by the contributions of immigrants. For me (principally I'm an immigration historian) this exhibit, through the lens of figure skating, brings us to some of the major issues of immigration in Canada. Whether it's questions of admission, people coming as refugees, but also integration and impact. Of course, through figure skating we see the impact of so many influential athletes and builders. If people are looking to understand the context of the event both locally and in a bigger, national picture, hopefully this exhibit will do that for them." 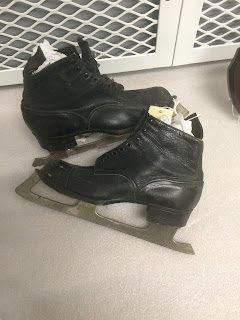 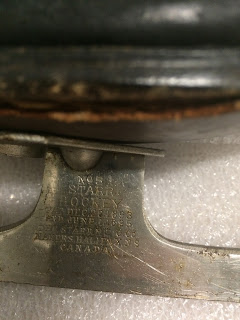 Skates made by John Forbes' Starr Manufacturing Company. Photos used with permission of the Canadian Museum Of Immigration At Pier 21.

This Saturday from 1-3 PM, Haligonians will have a chance to learn more about the exhibit and meet Pier 21's big bear Fenton at the Emera Oval and win prizes including tickets to the competitions at the Scotiabank Centre. But what about those of you who already have your tickets? Just bring your stubs on down to Pier 21 to receive fifteen percent off your museum admission.

"There was a young skater named Toller,
Who made people laugh, scream and holler.
He'd do a mazurka,
For a lady named Burka -
Providing she paid him a dollar." 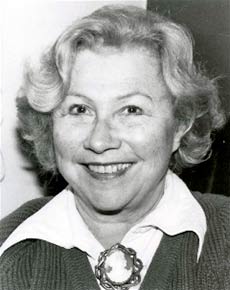 The Canadian Museum Of Immigration at Pier 21 will also be hosting a free screening of the 2007 documentary "Skate To Survive", written by Michael Kainer and directed by Astra Burka. The forty-eight minute piece was featured at the Toronto Jewish Film Festival and the Jewish Eye World Jewish Film Festival in Ashkelon, Israel in 2008 and intimately tells the story of Ellen Burka, a Holocaust survivor and the iconic coach of such Canadian skating greats as her daughter Petra, two time Canadian Champion Jay Humphry and of course, the legendary Olympic and World Medallist and six time Canadian Champion Toller Cranston. If you're not familiar with Mrs. Burka's story, I am going to absolutely insist that you make the time to listen to Paul Dore's two part interview with her on Open Kwong Dore podcast. I promise you, after you do, you'll be fighting me for front row seats honey... and you will lose! The documentary is at 7 PM on Thursday, January 21 and if you come an hour early, the Museum's staff will be offering visitors a special introduction to the "Perfect Landings" exhibit. I'll also be kicking around and would love to chat with any of you that will be in attendance!

Skate Guard is a blog dedicated to preserving the rich, colourful and fascinating history of figure skating. Over ten years, the blog has featured over a thousand free articles covering all aspects of the sport's history, as well as four compelling in-depth features. To read the latest articles, follow the blog on Facebook, Twitter, Pinterest and YouTube. If you enjoy Skate Guard, please show your support for this archive by ordering a copy of the figure skating reference books "The Almanac of Canadian Figure Skating", "Technical Merit: A History of Figure Skating Jumps" and "A Bibliography of Figure Skating": https://skateguard1.blogspot.com/p/buy-book.html.
Posted by Skate Guard Blog at January 13, 2016
Email ThisBlogThis!Share to TwitterShare to FacebookShare to Pinterest
Newer Post Older Post Home