Howdy, Mr. Ice And The Demise Of The Centre Theatre 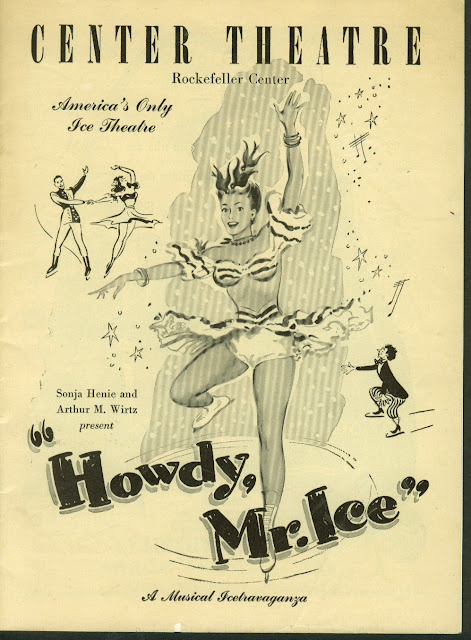 New York City's Centre Theatre may no longer be standing, but during the forties it enjoyed a decade of popularity as an exclusive venue for live skating shows. It all started in 1940, when maverick ice show producer Arthur M. Wirtz negotiated with G.S. Eyssell, the executive producer of Rockefeller Center and the president of the Radio City Music Hall to convert what was then a stage theatre into an ice theatre. A quarter of a million dollars was spent on the whole transformation and in October 1940, a three hundred thousand dollar production called "It Happens On Ice" kicked off the festivities at the Centre Theatre with a two year stint. Other shows followed: "Stars On Ice", "Hats Off To Ice", "Icetime" and "Icetime Of 1948". Beginning in the summer of 1948, Sonja Henie and Arthur M. Wirtz staged the sixth skating production to take to the Centre Theatre stage, "Howdy, Mr. Ice".

Although Freddie Trenkler appeared in earlier shows, by December 6, 1948 (the date of the program I have), he was no longer in the show. Music was performed by Nola Fairbanks, Dick Craig, William Douglas and Fred Martell. "Howdy, Mr. Ice" held both matinee and evening performances and featured choreography by Catherine Littlefield, a former prima ballerina who was also the director of the Philadelphia Ballet Company. Elaborate costumes designed by Billy Livingston and Kathryn Kuhn accented a lavish stage set by Bruno Maine.

The show itself was in two acts and featured elaborate production numbers that ranged from Americana and typical ice show fare (Yankee Doodle Dandies, skating flowers and a Christmas number) to more avant garde pieces. Among the latter were an African safari lion hunt, an artistic piece depicting Mercury and Pandora skated by Baxter and Clark and an interpretive solo skated by Seigh called "Golden Eagle". The show's second act opened with a lavish production of "Sleeping Beauty" and the grand finale - "The World's Greatest Show" - was a circus theme with skaters dressed as clowns, elephants, leopards, panthers, giants, horses and acrobats. A few things made "Howdy, Mr. Ice" particularly unique compared to other ice shows of its era. It included aerial work from Jinx Clark (which has only really become largely popular on ice in recent years) and Skippy Baxter was attempting triple jumps in the show before Dick Button landed the first in competition in 1952.

Reviews were mostly favourable. The Spokane Daily Chronicle called the show "delightful" and "the best in its series" and The Ottawa Citizen called it "proficient and well-staged". However, by the late forties, competition was fierce in the entertainment history in New York City. Ice shows were in direct competition with new musical acts and stage plays and many people chose to spend what dispensable income they had on tickets to new musicals that debuted in 1949 like "Gentlemen Prefer Blondes" and "South Pacific" instead. As seats filled on Broadway, residents of The Big Apple bid adieu to Mr. Ice. In no time flat, the seats were empty and The Centre Theatre lost its lease in the spring of 1950. The venue briefly used as an NBC television studio before its demolition in 1954 and it would be decades before The Ice Theatre Of New York would fill the void left by the closure of this spectacular venue.

Skate Guard is a blog dedicated to preserving the rich, colourful and fascinating history of figure skating and archives hundreds of compelling features and interviews in a searchable format for readers worldwide. Though there never has been nor will there be a charge for access to these resources, you taking the time to 'like' on the blog's Facebook page at http://www.facebook.com/SkateGuard would be so very much appreciated. Already 'liking'? Consider sharing this feature for others via social media. It would make all the difference in the blog reaching a wider audience. Have a question or comment regarding anything you have read here or have a suggestion for a topic related to figure skating history you would like to see covered? I'd love to hear from you! Learn the many ways you can reach out at http://skateguard1.blogspot.ca/p/contact.html.
Posted by Skate Guard Blog at February 04, 2016
Email ThisBlogThis!Share to TwitterShare to FacebookShare to Pinterest
Newer Post Older Post Home