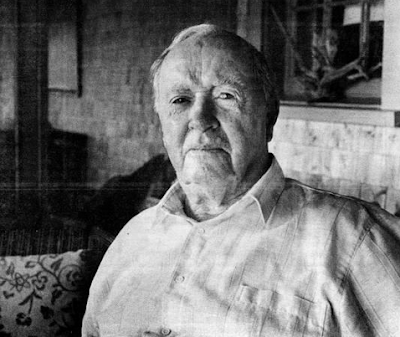 Get ready for your head to spin faster than Lucinda Ruh, because this Skate Guard blog's got a little bit of everything: high society, hockey history, figure skating... and tuna. Yes, tuna. If you're allergic to seafood, get out! Just kidding. Don't be deterred. The tuna won't come into the story until much later on.

I suppose we should start by talking about Duncan number one. To say that nineteenth century Scottish Canadian businessman Duncan McIntyre was influential would be a bit of an understatement. He was not only a founder of the Bell Telephone Company of Canada but also the owner of the Canadian Central Railway. He played an important role in the 1880 Canadian Pacific Railway syndicate and thusly, in Canadian railroad history. The man also had a bit of money, to put it mildly. He lived in a downtown Montreal mansion designed by architect William Thomas on a ten-acre plot and rubbed shoulders with Québec's upper crust. He and his wife Jane Allan Cassils had four sons and three daughters. One of them was also named Duncan. Duncan number two's sister Mary Fisher McIntyre married her first cousin - yes, you read that right - Archibald Arthur Hodgson and together they had a son named Duncan McIntyre Hodgson, making three generations of Duncan's. Imagine asking Duncan to pass the gravy at Christmas dinner!

Archie Hodgson was a member of the Montreal Hockey Club and was the scorer of the winning goal for his club in the first Stanley Cup final on March 17, 1893. Instead of following in his father's footsteps, his son Duncan joined the Montreal Winter Club. In no time, Duncan number three was one of the city's most promising young figure skaters. In 1918, he defeated Brooklyn's F.M. Meline for a win at a competition for 'boys under eighteen' held at the St. Nicholas Rink in New York City. A review of the event in the March 10, 1918 issue of The Sun noted that "Hodgson did not have the easy time that he had been expected to enjoy, for Meline gave him quite the contest... Meline showed surprising ability in free skating, but was beaten easily in the school figures in which he had only had meagre instruction."

Two years later when the Canadian Figure Skating Championships resumed after being cancelled for four years due to World War I, Duncan earned the silver medal in the senior men's event behind Norman Scott and ahead of Melville Rogers. The following year, he claimed his first of two Canadian senior men's titles. One thing that was particularly notable about his successes during his short stint as a competitive skater was the fact that for three years running he placed ahead of Melville Rogers, who went on to become a multiple time Canadian and North American Champion. After winning two national men's titles, Hodgson teamed up with Marjorie Annable to take top honours in the pairs event in 1923. Military service ended his short competitive career and he married Hylda Anne Ross, the daughter of famed horse racer and army Captain J.K.L. Ross. He did, for a time however, continue to take the ice to give exhibitions in Montreal skating carnivals after his competitive skating career came to a close.

According to Pat D.C. Barnhouse's paper "Trials and Tribulations: An Examination of the Decision to
Terminate the FHE 400 Hydrofoil Project", Duncan caused some waves while serving in the military: "After the Second World War a wealthy Royal Canadian Naval Reserve officer, Lieutenant-Commander Duncan Hodgson, commissioned the New York naval architect Phil Rhodes to design a hydrofoil for an attempt at the water speed record. The Defence Research Board (DRB) got wind of this and Hodgson was convinced to change tack and instead have a vessel designed to demonstrate the naval potential of hydrofoils. This became the five-ton R-100, more commonly known as Massawippi. It is important to remember that this collaboration came about because of the particular interest on one person in DRB and his acquaintance with Hodgson; it was not a corporate decision shared with the Naval Service Headquarters (NSHQ). That would probably have served to improve chances of commitment and acceptance on the part of the navy. This early work was later reviewed in a report for the chief of naval staff (CNS)." Understand any of that rhetoric? I can't say I did... but I think the gist of it is that he ruffled a few feathers. 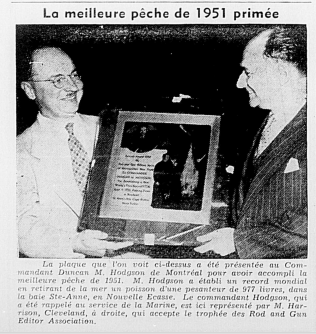 Here's where the tuna comes in. In 1911, Duncan's father-in-law J.K.L. Ross set a record right here in Nova Scotia for catching the world's largest tuna. Caught with a rod and reel and no harness, Ross struggled with the fish for four hours and forty five minutes before hauling it in. The tuna was six hundred and eighty pounds. For good measure, Ross bested his own world record by catching a seven hundred and twenty pound tuna. Guess who beat the record? Duncan McIntyre Hodgson. The three time Canadian Champion - representing the brawn of pairs guys everywhere - hauled in a nine hundred and ninety seven pound tuna with no harness in 1950. His record (also set here in Nova Scotia) stood for twenty years. I'll have to pop in to the Maritime Museum Of The Atlantic on a lunch break and see if they have pictures or anything. But seriously though... are you freaking kidding me? This guy made Charles C. Russell's Ripley's Believe It Or Not skating barbell feat look like small potatoes. A 1991 interview in Cape Breton's Magazine shares Duncan's best tuna catching tip: "Sometimes you threw out mackerel, and attracted them that way. But they didn't take the bait that way very much. I had one feeding out of my hands. I saw him every day at the same spot, and I'd throw a fish to him and he'd come up and take them. Extraordinary." Tame or not, I think I'll stick with my Clover Leaf.

Duncan McIntyre Hodgson passed away just three years after that interview about his fishing exploits on January 14, 1994, eight days after the attack on Nancy Kerrigan. He is buried in Montreal, the same city he was raised and trained as a champion skater. Despite his three Canadian titles and quite interesting story and background, I can honestly say the next time I'll be thinking of this skater is when I have a tuna sandwich.

Skate Guard is a blog dedicated to preserving the rich, colourful and fascinating history of figure skating and archives hundreds of compelling features and interviews in a searchable format for readers worldwide. Though there never has been nor will there be a charge for access to these resources, you taking the time to 'like' on the blog's Facebook page at http://www.facebook.com/SkateGuard would be so very much appreciated. Already 'liking'? Consider sharing this feature for others via social media. It would make all the difference in the blog reaching a wider audience. Have a question or comment regarding anything you have read here or have a suggestion for a topic related to figure skating history you would like to see covered? I'd love to hear from you! Learn the many ways you can reach out at http://skateguard1.blogspot.ca/p/contact.html.
Posted by Skate Guard Blog at February 23, 2016
Email ThisBlogThis!Share to TwitterShare to FacebookShare to Pinterest
Newer Post Older Post Home