The Life And Death Of Rita Trapanese 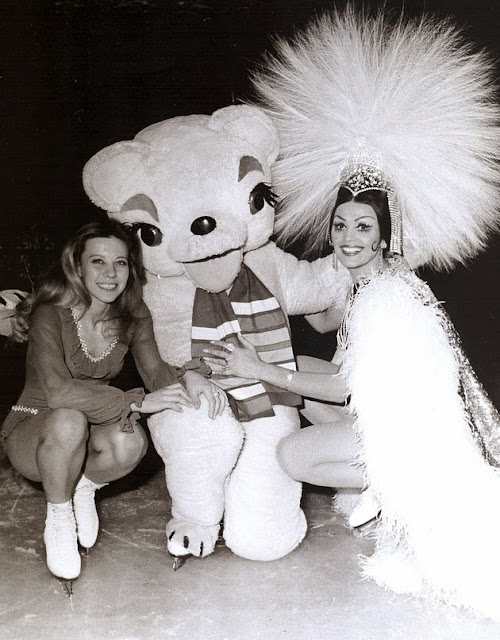 Carolina Kostner, Silvia Fontana, Valentina Marchei... in recent years Italy has certainly produced some outstanding and accomplished female skaters. Earlier this month, we explored the story of Olympian and ice show star Anna Galmarini and today on Skate Guard, we will take a brief look at the tragic tale of another Italian woman with a fascinating figure skating career.

Born on May 8, 1951 in Milan, Italy, Rita Trapanese dominated skating in her country for almost a decade, winning eight consecutive Italian titles from 1965 to 1972. Tragically, she joined the likes of two of her figure skating contemporaries - 1968 Olympic Bronze Medallist Hana Mašková and four time World Champion Pavel Roman - when she too tragically died in a car accident on August 10, 2000 in Gattatico, Emilia-Romagna, Italy. Trapanese was by accounts a very strong willed and disciplined skater. She'd get up at five AM every day and be there when the doors at the Ice Palace Via Piranesi opened. By eight PM, she was in bed ready to do it all over again the next day. Her career was full of some wonderful accomplishments. In 1969, she won the bronze medal at the Richmond Trophy in England which she followed up with a win the following season.


After missing the podium on her first five attempts, in 1971 she won the bronze medal at the European Championships in Zürich behind Trixi Schuba and Hungary's Zsuzsa Almássy. That medal would prove to be the very first medal an Italian ladies singles skater would ever win at a European Championships. She followed her medal win in Switzerland up with a silver behind Schuba in Gothenburg, Sweden in 1972. In doing so, she paved the way for competitor Susanna Driano to win two more medals for Italy during the same decade. Her Olympic appearances in 1968 and 1972 didn't boast the same results, though her seventh place finish in Sapporo was a massive improvement over her twenty fifth place effort in Grenoble. Her best finish at a World Championships came in her final attempt in 1971 in Lyon, France, where she was third after the school figures and finished fifth overall. She retired from amateur competition following the 1972 Olympic Games with aspirations of finishing school, starting another career and raising a family.

She enjoyed a brief professional career that included a stint with Holiday On Ice in Europe and performances with Moira Orfei, a popular Italian actress who is known as "the queen of the circus" and then got into journalism. On September 7, 1974, Trapanese married Dr. Maurizio Vaglini, a tumour specialist at the Milan Cancer Institute. Together, they raised two children and Trapanese dedicated much of her time to work and advocacy for underprivileged youth. An article shortly before her death from The Journal in Italy quoted Trapanese as saying "I have two of my own but for years I supported some in remote parts of the various continents: Indian, Brazilian and Santo Domingo. We write the letters and then I regularly receive their report cards and many photographs." She remained connected to the skating community as well, four months before her death attending a party celebrating the success of Barbara Fusar-Poli and Maurizio Margaglio. The Journal article said "that afternoon, she was almost on the sidelines, wanting the moment (to be) all for them. But she was moved, visibly excited" to be among her peers.

The car accident that took Trapanese and her husband's life in 2000 on Route 88 was as awful as any car accident could be. Mechanical trouble caused the Jaguar that Trapanese, Vaglini, Massimo Simonetta Bacchetti and Baroque were travelling in to drive into a cement bypass. Efforts to brake failed and they swerved into oncoming traffic and the Jaguar was hit from behind by a Ford Escort. Trapanese and Vaglini - unfortunately being in the backseat - suffered the brunt of the collision along with those in the front seat of the Ford Escort. Seventy four year old Luigi Volpe of Milan, the driver of the Ford Escort and Trapanese were killed instantly and Vaglini died later that evening in hospital of his injuries. Volpe's wife Maria Luigia Visani and the travel companions of Trapanese and Vaglini also suffered serious injuries. Trapanese has been posthumously remembered in her country with the Trofeo Rita Trapanese, which was the name of the ISU Junior Grand Prix competition held in Italy for a time. Her pioneering efforts in bringing Italian women's skating to the forefront should never, ever be forgotten.

Skate Guard is a blog dedicated to preserving the rich, colourful and fascinating history of figure skating and archives hundreds of compelling features and interviews in a searchable format for readers worldwide. Though there never has been nor will there be a charge for access to these resources, you taking the time to 'like' on the blog's Facebook page at http://www.facebook.com/SkateGuard would be so very much appreciated. Already 'liking'? Consider sharing this feature for others via social media. It would make all the difference in the blog reaching a wider audience. Have a question or comment regarding anything you have read here or have a suggestion for a topic related to figure skating history you would like to see covered? I'd love to hear from you! Learn the many ways you can reach out at http://skateguard1.blogspot.ca/p/contact.html.
Posted by Skate Guard Blog at February 25, 2016
Email ThisBlogThis!Share to TwitterShare to FacebookShare to Pinterest
Newer Post Older Post Home
"As a rule an author has one or two popular ways of contrasting the past with the present. He can treat the past as lying in comparative doleful ignorance, or he can explain that the past was infinitely superior to the day we live in. Of course, either method is the popular journalism of the moment, and in reality there is no sharp contrast, but a gradual transition which leads the past into the present." - Joel B. Liberman, Skating Club Of New York