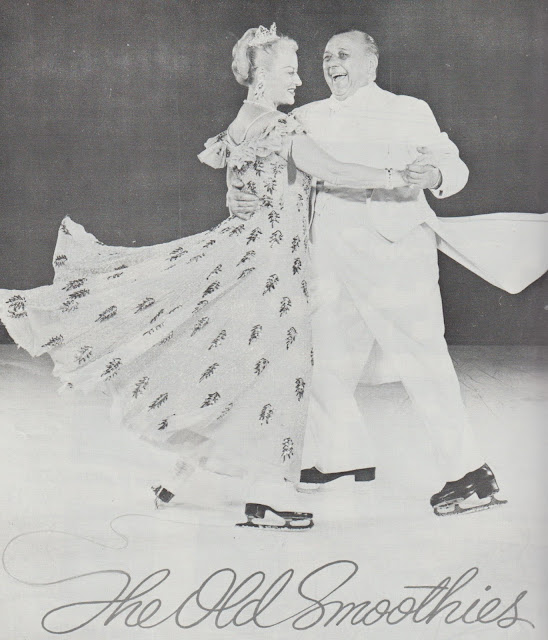 Often incorrectly attributed to architects of the era because of its common use in art and design, the phrase "Less is more" actually came from an 1855 Robert Browning poem. It seems a wonderful phrase to describe the contribution to the skating world of TWO husband and wife teams better known to adoring audiences worldwide as The Old Smoothies. 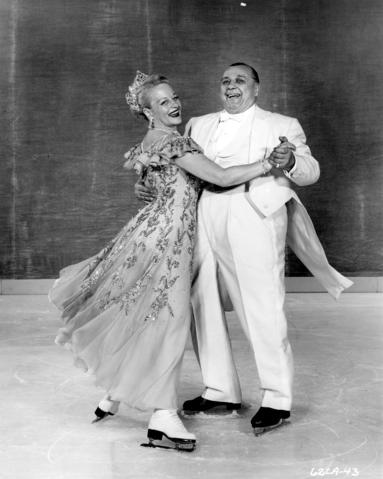 Orrin Lars Markhus' family emigrated to the U.S. from Scandinavia in 1853. After performing with his first wife Ellen at the College Inn shows at the Hotel Sherman during World War I, he taught his second wife, Irma Thomas, how to skate in St. Paul, Minnesota in 1936. The mature couple took to the ice one night for an audition for the Ice Capades and the rest was, as they say, history. A 1959 article in The Pittsburgh Press explains how Markhus and Thomas got their start as The Old Smoothies, an ice dance duo that wowed audiences from the forties to the sixties:  "The stars and other skaters had finished practice, and only a few lights burned in the damp Los Angeles ice rink that night in 1942. Most of the tired skaters, however, stood out of curiosity to watch an audition of a couple of older skaters. It was past midnight and hardly an auspicious setting for a tryout for the Ice Capades. Then someone turned on a recording of 'Shine On Harvest Moon' and Irma Thomas and Orrin Markhus glided out onto the ice. Before they had finished one full turn, the curiosity of the young pros had changed to interest and producer John H. Harris impatiently told an aide to keep quiet. 'I don't want to miss any of this,' he said. Mr. Harris hired Irma and Orrin and christened them 'The Old Smoothies'. They've been show stoppers ever since." 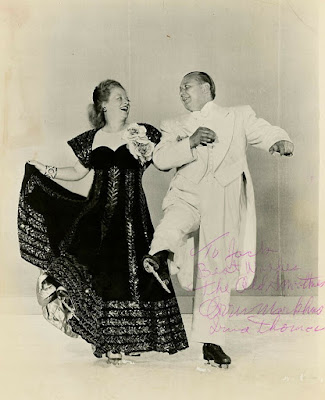 John Malone's "The Encyclopedia Of Figure Skating" explained, "Their solo act was essentially the same every year, although the music and costumes changed. Portly, bald-headed Orrin Markhus, in an elegant tailcoat, glided around the ice primarily to waltz music with the slender Irma Thomas, whose evening dresses revealed only her skates. They performed no special tricks but, followed by a spotlight, they gave a sense of consummate grace and ease. The high point of their act, which always brought huge, affectionate applause, occurred when Irma raised the handkerchief that was always present in her right hand and gently mopped Orrin's glistening brow. The Old Smoothies were a shining example of how much can be achieved with a very simple performance done with an absolute mastery of style." The couple didn't miss a single show during the fourteen years they toured with the troupe. Retiring from the show in the sixties, Orrin passed away on April 16, 1979 and Irma is sadly no longer with us either. 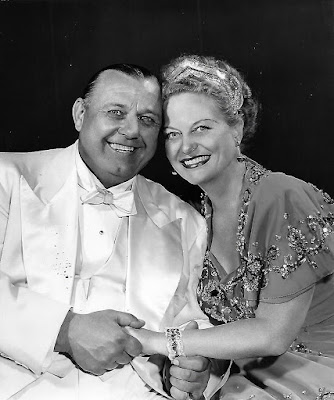 There was so much admire about this team beyond their grace. Irma never even donned skates until she was thirty eight, their children (the reason Irma took up skating in the place) grew up to become professional skaters themselves... and they were touring grandparents! A March 21, 1954 article stated that Irma even packed her knitting in her skating bag, which I also find absolutely charming.
However, although they dazzled audiences for close to two decades, Markhus and Thomas weren't the only Old Smoothies in town... 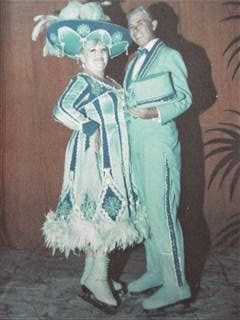 Brantford, Ontario's biggest claim to fame may be the fact that it was the birthplace of hockey legend Wayne Gretzky, but right at the same time an eleven year old Gretzky was honing his puck skills, newlyweds Irene Kewpie and Harold Avery were taking their first steps onto the ice as members of the Brant Figure Skating Club. After winning the Ontario Figure Skating Association's veteran dance competition for seven consecutive years, the couple embark on a professional career. This was no small feat considering they had started skating at fifty two and sixty two, respectively. Capitalizing on the success of Markhus and Thomas' Ice Capades act, Holiday On Ice International decided to add its own act called 'The Old Smoothies' and (you guessed it) signed The Avery's.

Like Markhus and Thomas, The Avery's had a perfect attendance record. A March 24, 2011 article from The Brantford Expositor delved into the Avery's adventures with Holiday On Ice: "'My mother left a note here that says they skated 1,144 times without missing a performance,' their daughter, Bev Kirk of Brantford, said Wednesday. 'The Ice Capades called them in 1971 but they said 'no' because they were back home. Their life had changed and they didn't fancy it.' The Old Smoothies became regular guests on the Stars On Ice television show from 1976 to 1981. 'After 1981, they just skated around at all the clubs. They did a lot of that. They last skated together in 1988. Their last Flashing Blades show was in 1987 but they skated at places into the next year.' Skating maintained a strong hold on Kewpie. 'She loved to talk about everything to do with skating,' Kirk noted. 'They kept in contact with a lot of the skaters. They knew a lot of them and they loved the Olympics.' Kewpie was able to drive her car until a year ago when 'they' took away her licence. 'That upset her but she was pretty healthy and she had a fantastic memory,' said Kirk." Harold sadly passed away in 2000. His wife Irene passed away eleven years later at the age of ninety seven.

In my April 2014 blog "Age (Like 6.0) Is Just A Number" I talked about the ageist culture in figure skating: "At the risk of sounding like Peter Griffin (which absolutely isn't a bad thing), do you know what really grinds my gears? Ageism, especially in figure skating. American civil rights activist Maggie Kuhn once said, 'I think of age as a great universalizing force. It's the only thing we all have in common. It doesn't begin when you collect your social security benefits. Aging begins with the moment of birth, and it ends only when life itself has ended. Life is a continuum; only, we - in our stupidity and blindness - have chopped it up into little pieces and kept all those little pieces separate.' The culture and emphasis on youth in the figure skating community lends people to think they're 'too old' and their careers are over in their early twenties. They're 'over the hill' at legal drinking age and 'need to step aside to allow a new generation to move up'. Bitch please. Yes, our bodies change as we get older and don't always do things the way we always might like... or as easily. Judging by the evidence of so many skaters having both 'amateur' and professional careers that extended well past their teens and twenties and all of the incredibly talented adult skaters out there, is there any reasonable excuse for the belief that people should hang up their skates at twenty one because 'the clock is ticking'? It's really a quite delusional mentality."

Those brave souls who take up skating at a later age or persist on in competition despite the illogical chirping of 'they're taking someone else's spot' are shining examples that nail home this message that the masses in figure skating can't seem to get their pretty little heads around. Just as audiences cheered on The Old Smoothies, we should be cheering on all skaters - regardless of their age - who love skating enough to soldier and Salchow on. Life's simply too short not to do what you love. I should know. I am doing it right now as I write this.

Skate Guard is a blog dedicated to preserving the rich, colourful and fascinating history of figure skating and archives hundreds of compelling features and interviews in a searchable format for readers worldwide. Though there never has been nor will there be a charge for access to these resources, you taking the time to 'like' on the blog's Facebook page at http://www.facebook.com/SkateGuard would be so very much appreciated. Already 'liking'? Consider sharing this feature for others via social media. It would make all the difference in the blog reaching a wider audience. Have a question or comment regarding anything you have read here or have a suggestion for a topic related to figure skating history you would like to see covered? I'd love to hear from you! Learn the many ways you can reach out at http://skateguard1.blogspot.ca/p/contact.html.
Posted by Skate Guard Blog at February 16, 2016
Email ThisBlogThis!Share to TwitterShare to FacebookShare to Pinterest
Newer Post Older Post Home