The Snow Queen: A Skating Ballet 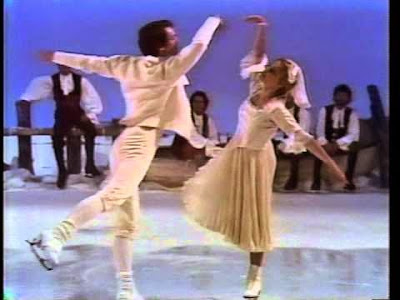 The show actually appeared to be doomed from the get go. Salem Alaton's 1982 article "A snow queen that kept melting away" from The Globe And Mail explained that "the troubled effort to bring forth the Christmas season show began when Bernice Olenick, a TV producer from Boston, contacted gold medallist skater John Curry about doing a Yuletide Nutcracker Suite on ice. (Olenick was representing WGBH in Boston for the Public Broadcasting Service.) Curry was delighted. But when financing had been arranged, it developed that another station was producing a Nutcracker for Christmas. Then it turned out that Boston didn't have a rink which could be rented for a month. And about that time, one of the financial backers quit. At this point, several things happened: Olenick contacted the CBC. Curry said never mind the Nutcracker: he had always wanted to do a Hans Christian Andersen children's fantasy called The Snow Queen. So the CBC, Olenick and the rest got together, took over the Commander Park arena in the Agincourt district of Metro Toronto in balmy September, and started filming a very colourful co-production." In the end, the show was a go but the filming time was reduced to a week. It was ultimately broadcast twice on PBS in December 1982 and then slightly altered for broadcast on CBC between Christmas and New Year's Eve of the same year."

The adaptation of the Hans Christian Andersen story to ice was choreographed by Curry and Jean-Pierre Bonnefoux and starred Curry and Lynn as unlucky lovers Eric and Gerda. Bezic played The Snow Queen and Cranston, Hamill and Starbuck each portrayed different characters (a flower spirit, robber and gypsy) that Gerda meets on her way to the Queen's ice palace where Eric was whisked away in a trance to be slowly frozen.

It's hard to conceive critics giving the thumbs down to a production with such an incredible cast, but they did. Alaton, who said, "The Snow Queen didn't seem to have a snowball's chance of survival - the program just kept melting away", wasn't the only critic who wasn't sold on the choreography of this all star production. In his December 25, 1982 article "Snow queen an ice cream sandwich", Rick Groen wrote that the production was "alternately dispiriting and exhilarating, like sandwiching caviar between slices of processed bread. In fact, it's two very different shows defiantly rolled up into one. The opening and closing scenes (the bread) display the two lovers (a dashing Curry and an elfin Janet Lynn) frolicking at a winter fair with the proverbial chorus of happy rustics. Here, with a cramped ice surface plopped in the middle of a conventional stage set, the picture is cluttered and the skaters are confined. Inevitably, the choreography is reduced to a relatively slow and consistently repeated series of dull spins, mundane lifts and unexacting jumps. Despite the best efforts of director John Thomson, we're left with the worst of both worlds - neither the intricacy of dance nor the speed, the power, the sheer surge of skating. Happily, the middle acts are rescued by the most unlikely of heroes - none other than television itself. Using an 'ultramat' technique, Thomson unleashes a dazzling sequence of special effects - Dorothy Hamill, the 'flower spirit' gliding within a pink fold of delicate petals, then twirling off into the fairy tale ether; Cranston himself, in a cameo turn, flamboyantly arched beneath the menacing stalactites of a frigid cavern; a dizzying kaleidoscope of skaters superimposed upon skaters, circling each other with the concentric precision of atoms in a crystal. Dazzled and charmed and excited, we suddenly get transported for the finale back to that prosaic set, which beckons with all the allure of a postage-stamp rink in a Don Mills backyard. By then, however, The Snow Queen has made its elegant point. And so, ironically, has television, the real marriage broker in this wedding of athletics and art. In the casting surprise of the year, a flawed medium takes on the role of aesthetic purist. And plays the part with remarkable distinction."

Despite those less than stellar reviews from newspaper critics, the show received a much more cheery reception from more knowledgeable skating audiences who appreciated the superb quality of the skating itself. In an interview backstage during production, Curry opined about the creative process by saying that "the reason I did the Olympics was in order to be able to do things like this afterward. To me, the Olympics was having to prove myself, getting my diploma, before people would trust me to do the kind of work I like. You can talk forever about what skating is, whether it's a sport or an art. Skating is very much its own thing. What I've always tried to do is to bring to skating a lot of talents that wouldn't ordinarily focus on it, such as designers, musicians, choreographers... Working in a group restores my love of skating." Janet Lynn, too, echoed Curry's sentiments about developing as a professional skater: "I never liked the attitude that one has to develop to do well in competition. I think that having other interests does help, gives you dimension in being able to skate."

My personal opinion? If you want to talk eighties television skating specials, for me personally Toller Cranston's special "Strawberry Ice" will always be tops, but I think John Curry was actually right on the money with the craftsmanship of this particular production. As they say, everyone's entitled to their own opinion... and in mine, John Curry's vision and execution of skating as high art was as good as it gets.

Skate Guard is a blog dedicated to preserving the rich, colourful and fascinating history of figure skating and archives hundreds of compelling features and interviews in a searchable format for readers worldwide. Though there never has been nor will there be a charge for access to these resources, you taking the time to 'like' on the blog's Facebook page at http://www.facebook.com/SkateGuard would be so very much appreciated. Already 'liking'? Consider sharing this feature for others via social media. It would make all the difference in the blog reaching a wider audience. Have a question or comment regarding anything you have read here or have a suggestion for a topic related to figure skating history you would like to see covered? I'd love to hear from you! Learn the many ways you can reach out at http://skateguard1.blogspot.ca/p/contact.html.
Posted by Skate Guard Blog at February 13, 2016
Email ThisBlogThis!Share to TwitterShare to FacebookShare to Pinterest
Newer Post Older Post Home