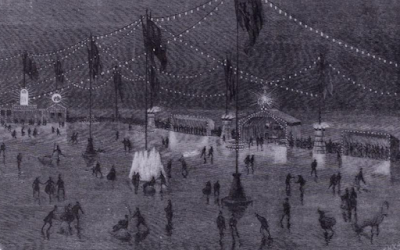 In terms of the founding of skating clubs, 1863 was quite the year. In the city now known as Oslo, Norway, the Christiana Skating Club was formed and of course, in America the coming together of skaters from the Schuylkill and Delaware Rivers with New York City skaters resulted in the formation of the New York Skating Club, the second in the country. A world away in nineteenth century Russia, a third skating club was formed that year - the Neva Skating Association - and its contributions to the development of skating were as important as any.

The Association was actually founded by a small group of English skaters living in St. Petersburg at the time and named the Neva Skating Association after the Neva River that flows through much of the city. It was the earliest known predecessor to the St. Petersburg Skating Club. Members skated both upon the Neva River itself and at a public rink that opened on Yusupov Gardens shortly after the Association was founded. There was apparently another rink known as the 'Prudki' which was on the garden at Grechesky Prospect, but the Yusupov Gardens were reserved for members of the Neva Association. 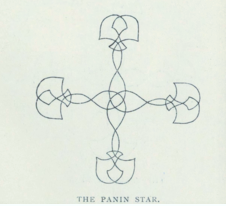 Without question, the most important contribution of the Neva Skating Association to skating history was the development of 'special figures'. Building upon the stiff English style of skating and attention to symmetry in carving out figures on the ice, the club's Russian members got quite inventive and really focused their attention on crafting beautifully elaborate designs on the ice. The imagination required to create and execute special figures was viewed as an artistic endeavour by these early Russian skaters and they placed more esteem on this lost art than free skating and traditional school figures, in that order. Competitions of the era placed the utmost importance on encouraging skaters to create new designs. In early competitions in Russia, traditional school figures were at times excluded from the bill entirely.

The Association also played an important role in dictating the skating fashion of the era. Female members - who absolutely existed - were known for wearing tunics that had the collars and borders embroidered with fur with a matching fur cap and high boots. The men of St. Petersburg also sported fur caps and this trend spread to Scandinavia by way of the many Russian Finn's who lived in the country and caught on in Norway, Sweden, Finland and Denmark as well as in Continental Europe.

Nigel Brown's authoritative 1959 book "Ice-Skating: A History" tells us that "every year the Neva was the scene of a dazzling carnival organized by the club. The Czar and members of the Imperial Family came to see it and skated. The ice-field was bordered by coloured lights and in the centre was an enormous snow figure from which shone a brilliant illumination like a lighthouse. Many of the skaters carried little coloured lights on their caps and in their belts and as they skated round in the dark, they looked like giant glow-worms. Cannons fired large snowballs that burst above the rink and sprayed skaters like confetti. These fêtes upon the Neva were the most extravagant and luxurious carnivals of the time. The Russian skating scene during this interesting period... was generally characterized by extravagance. If at times the ideas appeared somewhat fanciful, they were always visionary, and contributed a great deal to skating in this developmental age."

The Neva Association morphed into the St. Petersburg Society Of Ice Skating Amateurs in 1877, which was founded by a Neva member and docent at the city's university named Vyacheslav Sreznevsky - the son of Izmail Ivanovich Sreznevsky, a prominent figure in nineteenth century Slavic studies - along with prominent Russian skater and lawyer Alexei P. Lebedeff, architecture academian A.K. Bruni, a painter named Buchter, a general and two industrialists. In March of the next year, Sreznevsky won the first documented competition in Russia which was held at the Yusupov Gardens rink. By the late 1880's, a young Nikolay Panin-Kolomenkin was among the Society of St. Petersburg skating elite. 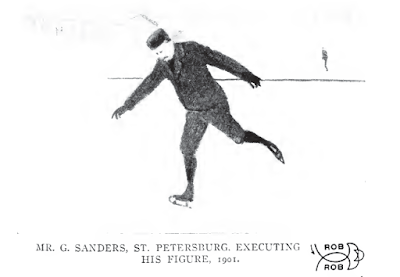 Skating in St. Petersburg continued to grow and develop with special figures always remaining in the forefront in terms of a skater's education. Russian Studies lecturer James Riordan explained in his 1977 book "Sport In Soviet Society: Development Of Sport And Physical Education In Russia And The USSR" that "the Society of Amateur Skaters sent its members abroad to take part in competitions and, in 1883, Alexei P. [Lebedeff] won the unofficial world figure skating title in Helsinki - the first Russian success in international competition."

In 1890, another of the earliest international competitions was held at Yusupov Gardens. Louis Rubenstein of Canada won the gold medal but it was Lebedeff who dominated the special figures. An American correspondent covering the event in the New York Clipper wrote of that the Russians "were the most awkward I have ever seen; even the simplest movements were only performed by a great deal of force, their hands and legs flying ln all directions. In regard to acrobatic skating they certainly shine, but in America or Canada such skating would not be tolerated by the judges. One of the best skaters here is Lebedeff, who closely observes the Canadian style and with more practice he will make a formidable opponent to even such finished skaters as Rubenstein. The ladies here, I must say, are very nice skaters, and some are very graceful in their movements; but I have seen none equal to some of our American lady skaters."

Not everyone shared Louis Rubenstein's sentiments about Russian skaters. In a reminiscence of a visit to St. Petersburg published in "The Century" in 1908, Lady Randolph Churchill remarked, "I was able to indulge to my heart's content in my favourite pastime of skating, which I did on the lake of the Palais de la Tauride, a royal palace where Russian society congregated. But great was my disappointment to find that the Russians did not care for figure-skating, and, in fact, did not skate well. I was told that had it not been for the Czarina (Marie), who was an adept in the art, people would not have appreciated skating at all." 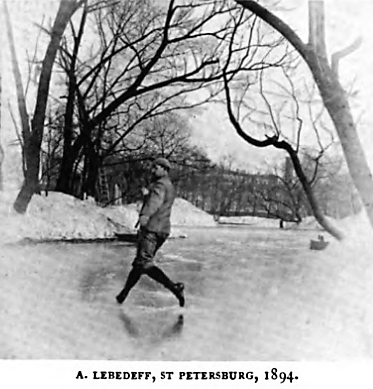 On February 9, 1896 the first World Championships recognized by the International Skating Union were held in St. Petersburg. Georg Sanders, an American living in St. Petersburg, claimed the bronze medal in the 'regular' competition that consisted of school figures and free skating but, drawing on his schooling, the gold in the special figures competition. Fittingly, in 1908, Panin-Kolomenkin became the only Olympic champion in the lost art of special figures. In Irving Brokaw's 1913 book "The Art Of Skating", Georg Sanders guest-authored a chapter on special figures where he noted how the art remained hugely popular in the earlier twentieth century. He stated that "in order further to encourage the invention and execution of new figures, a silver challenge shield was presented by N.D. Bojarinoff, in 1909, at Wiborg, for competitions from which compulsory skating of school figures was entirely absent; the competition consisting of two parts, viz., Figure Combinations (figure designs) and Free Skating. This was won in 1909, at Wiborg, by K. (Ollo) of St. Petersburg."

Many factors contributed to special figures falling out of favour but interestingly, the art remained popular in Russia for decades after these intricate designs were excluded from major international events. Although there was certainly a long period where skaters from North American and Continental Europe dominated international competitions, Russian skaters have consistently been considered among the most esteemed in the world. I must say that their early skating roots - the fur costumes, special figures and colourful spectacles on the Neva River - are certainly fascinating.

Skate Guard is a blog dedicated to preserving the rich, colourful and fascinating history of figure skating and archives hundreds of compelling features and interviews in a searchable format for readers worldwide. Though there never has been nor will there be a charge for access to these resources, you taking the time to 'like' on the blog's Facebook page at http://www.facebook.com/SkateGuard would be so very much appreciated. Already 'liking'? Consider sharing this feature for others via social media. It would make all the difference in the blog reaching a wider audience. Have a question or comment regarding anything you have read here or have a suggestion for a topic related figure skating history you would like to see covered? I'd love to hear from you! Learn the many ways you can reach out at http://skateguard1.blogspot.ca/p/contact.html.
Posted by Skate Guard Blog at April 14, 2016
Email ThisBlogThis!Share to TwitterShare to FacebookShare to Pinterest
Newer Post Older Post Home