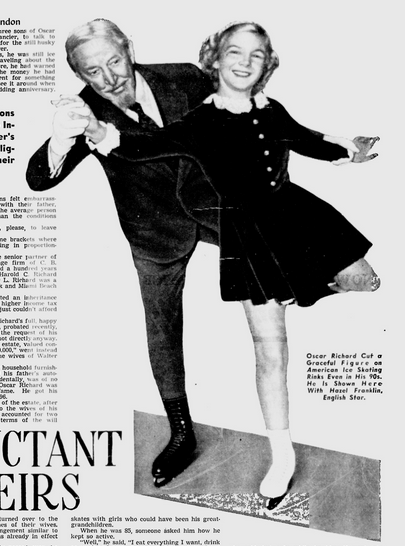 From the day Oscar L. Richard was born on June 2, 1855 in Brooklyn, New York, he never wanted for anything. Oscar was the son of German immigrants Charles B. Richard and his wife Julia Heller. His father founded the New York Stock Exchange firm of C.B. Richard and Company and raised Oscar, his younger sisters Flora, Olga and younger brother Edwin in the lap of luxury.

Oscar Richard learned to skate at the old Fifth Avenue Pond at 59th Street and Central Park and Hugh Mitchell's pond on the side of 5th Street in New York City. At age sixteen in 1872, he went to work at his father's firm for four dollars a week. That same year, he won his first of sixty trophies for 'fancy' figure skating. As he rose to prominence as a skater, it was evident that he had a knack for business as well. By the time he was in his twenties, he was making considerably more than his initial salary and earning quite a reputation of his own as a financier. The "Milwaukee Sentinel", on June 6, 1948 recalled that in addition to skating and banking, "he was one of the first members of the New York Athletic Club and excelled in boxing, fencing, horseback riding and the hurdle races. He was a dancer, too. His partners ranged from Princess Nicholas of Hesse to the young ladies of the skating rinks." In 1876, he won the New York Athletic Club's high jump and hurdling contests. 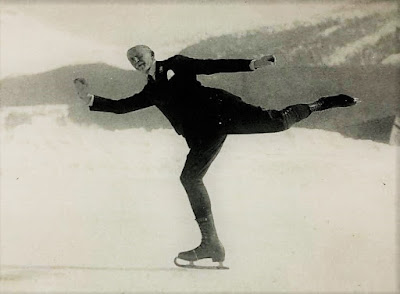 On December 20, 1883, Oscar married Anna Littauer and together they had three sons: George, Harold and Walter. During the first twenty years of his marriage to Anna, Oscar gave up ice skating entirely to focus on his business, which required him to travel extensively throughout America. An avid motorist as well, Richard got his first speeding ticket in 1896. The same "Milwaukee Sentinel" article cited earlier noted that "in his first brush with traffic policeman, in 1896, he was riding a motor tricycle of French make down Fifth Avenue. Brought into court for speeding, he told the judge that the motor company needed at least $100,000 more to improve its vehicle so that it could go 15 miles an hour, much less exceed it. Case was dismissed." He also travelled countless times across the Atlantic and it was on a 1907 trip to the skating resorts of St. Moritz, Switzerland where he learned to skate in the freer Continental Style. It reinvigorated his interest in the sport.

Richard returned to the New York City skating scene just as this 'new style' was really making waves in America. In 1920 - at age sixty five - he entered the junior men's competition at the U.S. Figure Skating Championships and won. The senior men's champion that year, Sherwin Badger, was only nineteen. As a reminder to those of you who may be baffled by this, back then the difference between junior and senior events had nothing whatsoever to do with age and everything to do with which tests you had passed. At any rate, a junior national title at age sixty five was NO small accomplishment, even back then. Ten years later in 1930, then seventy five year old Richard skated to gold in a waltzing competition in St. Moritz, Switzerland. His partner was none other than a nine year old Megan Taylor. To this day, this partnership likely represents the one of the biggest age differences (sixty six years) in any winning ice dance couple. Six years later on Christmas Eve, 1936, eighty one year old Richard was one of six amateur skaters who gave an exhibition at the Rockefeller Center's skating rink. Skating lore goes that he was the very first person to ever skate on the newly finished rink.

A shrewd negotiator, Richard had his second brush with the law the following year at age eighty two. Arrested for double parking and with a paltry two dollar fine at stake, The Milwaukee Sentinel describes how he won what he called 'the biggest legal battle of his life': "Mr. Richard sent a barrage of letters to police officials and magistrates. He went into court flanked by witnesses and armed with figures. His chauffeur had indeed double-parked, he said, but only while he himself went into a flower shop to make a purchase. The car was there not longer than two minutes, he asserted... The judge dismissed that case, too." 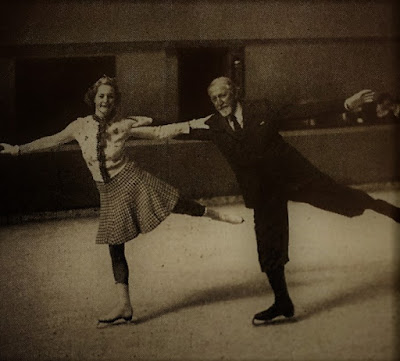 Remaining active both as a financier and regular soloist at skating shows in New York, Richard also continued on his whirlwind travels. The Milwaukee Sentinel noted that "in June 1941, he went to Maine, returned in August, took a plane to Chicago, a train to Sun Valley, Idaho, where he skated a few days, and then motored through the Canadian Rockies, Yellowstone Park and Colorado Springs. After climbing Pike's Peak in a snowstorm, he went to St. Louis for the wedding of a grandson, drove back to New York, went out to Sun Valley again for six weeks, returned to New York, and took off a few days later, in February, [1942] to attend the wedding of a granddaughter in Miami." He was well known in skating circles from St. Moritz to New York to Sun Valley and even had an honorary lifetime membership with the oldest skating club in America, the Philadelphia Skating Club and Humane Society.

Sadly, his wife Alice died in November 1942 but this didn't slow Richard down one bit. Lynn Copley-Graves, in her book "Figure Skating History: The Evolution Of Dance On Ice", noted that "from 1919 to 1947 he skied at St. Moritz until a shoulder injury made him fear that future injuries might interfere with his skating." He remained a fixture at the Rockefeller rink and at age ninety, gave one of his final solo performances on ice in the Skating Club of New York's club carnival at Madison Square Garden. Noted by many sources for his muscular physique well into his eighties, he was asked at age eighty five how kept in such great shape. His response (which I absolutely love) was, "well, I eat everything I want, drink as much as I want, and smoke six or seven cigars a day. I feel fine."

Before he passed away at age ninety two on March 9, 1948, his three sons had a reluctant conversation with their father about his estate. They were all well off themselves from the family business and wanted their father to leave his considerable fortune to other family members who may have been in greater need. He did. His daughter-in-law's split four hundred thousand dollars. A further sign of his benevolence was the donation of the Oscar L. Richard Award, which was given to the U.S. Figure Skating Association to be rewarded for the 'most outstanding free skating performance at the U.S. Championships'. In 1953, Ronnie Robertson won Richard's award, passing the torch from one generation of inspiring skaters to another.

Skate Guard is a blog dedicated to preserving the rich, colourful and fascinating history of figure skating and archives hundreds of compelling features and interviews in a searchable format for readers worldwide. Though there never has been nor will there be a charge for access to these resources, you taking the time to 'like' on the blog's Facebook page at http://www.facebook.com/SkateGuard would be so very much appreciated. Already 'liking'? Consider sharing this feature for others via social media. It would make all the difference in the blog reaching a wider audience. Have a question or comment regarding anything you have read here or have a suggestion for a topic related to figure skating history you would like to see covered? I'd love to hear from you! Learn the many ways you can reach out at http://skateguard1.blogspot.ca/p/contact.html.
Posted by Skate Guard Blog at June 04, 2016
Email ThisBlogThis!Share to TwitterShare to FacebookShare to Pinterest
Newer Post Older Post Home