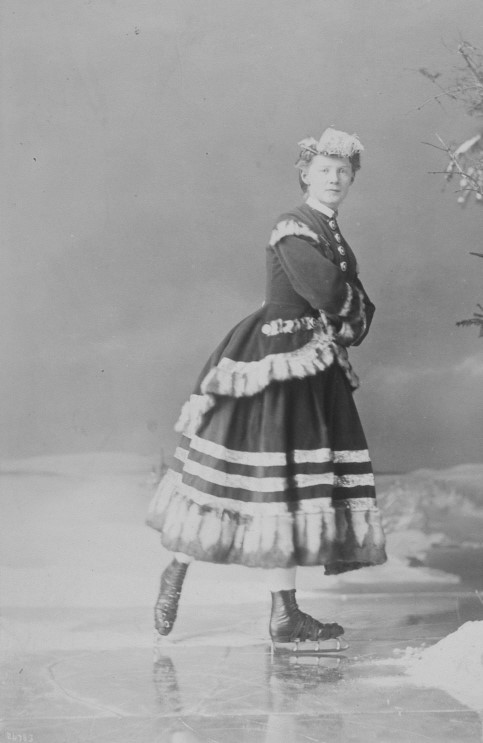 Photo courtesy Musée McCord Museum. Reproduced for educational purposes under license permission.
Born December 12, 1840, Caroline (Carrie) Augusta Moore was a terribly important pioneer in both American figure skating and roller skating. She was from Concord, Massachusetts and the daughter of Captain John B. Moore (the Deputy Sheriff of Middlesex County) and Sarah Augusta (Hunt) Moore. She was the oldest of three sisters and her childhood interest in skating developed into what would prove to be quite a nineteenth century professional skating career. Like Mabel Davidson who followed in Carrie's footsteps, she was absolutely revolutionary in every sense of the word at a time when even speed walking was considered 'an unsuitable sport' for women.

Carrie's first public performance of note wasn't actually on ice skates but instead on rollers. In the spring of 1863 when she was twenty three, she gave an exhibition of the sport at the Boston Theatre. At the time, the ability to achieve success both roller skating and 'fancy skating' on ice was kind of a prerequisite for anyone hoping to make a year round career of it all, and she was pioneering in that respect as well, widely acknowledged as the one of the first female roller skating stars in America. 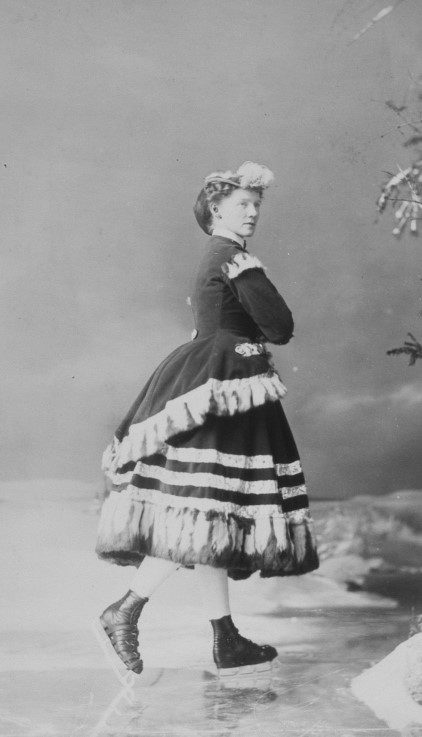 Carrie had a good sense of humour. While practicing ice skating in Central Skating Park in January of 1866, she was introduced to journalist John Mansir Wing. In his 1865-1866 "Chicago Diaries", Wing said, "She did me the honor to fall upon the ice, and send for me to pick her up." On February 17, 1866, she was in Philadelphia performing as a special guest of the American Academy Of Music in a Grand Skating Matinee. In the Friday, February 16, 1866 issue of "The Philadelphia Inquirer", she was billed as "the greatest lady skater in the world". The paper also noted, "This lady skates to music with all of the grace of the most accomplished danseuse", making it clear she was performing to accompanying music in America only three years after Jackson Haines shocked audiences by doing so at the Championships Of America.

However, Carrie wasn't always embraced with open arms. Henry Roxborough's 1966 book "One-Hundred Not Out: The Story Of Nineteenth-Century Canadian Sport" recounts one such occasion in Canada: "In 1867, for instance, at Hamilton's Victoria Rink, Miss Moore, the widely publicized 'Skatorial Queen' performed. She made her first appearance in an attractive Polish costume, and with the first blast from the volunteer band, she whirled around the portion of the ice that had been roped for her performance. She waltzed for maybe ten minutes, rested for another twenty, then reappeared in a costume described as American in character and glittering with golden stars. While the Skatorial Queen tried hard, the spectators remained cool both physically and responsively. It was reported that Miss Moore had received $300 for two performances, and a paying customer cruelly complained, 'She ain't that good.'" 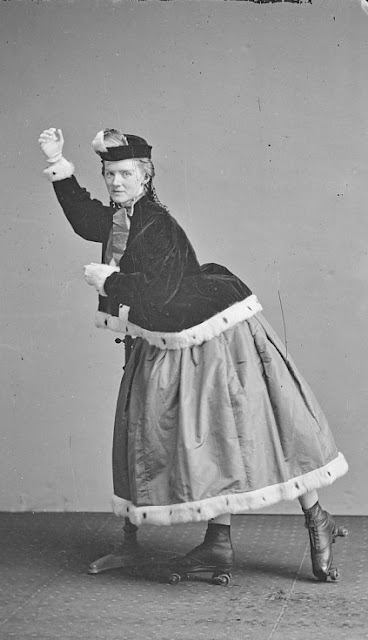 In March 1868, Carrie again turned attention to roller skating when she appeared at the Olympic Theatre in New York in a skating scene that was part of a pantomime of "Humpty Dumpty". And no, there are no accounts of her 'taking a big fall'. She popped up again on Christmas Day, 1869 at the Oswego Ice Rink in New York. The "New York Clipper" described her performance thusly: "Miss Moore skates very timely, and gave entire satisfaction, drawing one of the best crowds ever seen in the rink." She followed her Oswego performances up with shows in New York City and Chicago.
Eugene H. Cropsey's book "Crosby's Opera House: Symbol of Chicago's Cultural Awakening" noted "Roller skating had recently become fashionable, and a large roller rink had just been opened on Wabash Avenue. The rink's manager was making a drawing attraction of Miss Carrie Augusta Moore of Concord, Massachusetts, believed to be the first female roller skater. The manager had prepared a gold medal to be presented to Moore in public, and proposed to C.D. Hess that she appear on skates during the intermission of a matinee of Aurora Floyd to receive it. Hess happily agreed and arranged for a member of his company to make the presentation and give a speech in which he bestowed upon her the title of 'Skatorial Queen.'"

Later, Carrie would be billed as 'the Velocipede Queen' when she added gymnastics to her roller skating performances. Her costuming (hardly what you would expect in competitive skating during that era) was described as a feathered cap over her flowing blonde hair, a blue velvet blouse embroidered in gold with matching trousers to her knees and white tights. Yes, she was skating in pants decades before Herma Szabo, Sonja Henie and others popularized shorter skating skirts.

In the July 19, 1871 "Marysville Daily Appeal", Carrie's roller skating performance was praised highly: "By-and-by, after the band had played pretty much all the music out of their horns, Miss Moore appeared, or rather flew into the room. No, she rolled in. No, that ain't what we meant to say. She sailed in. No - she glided in - floated in - that's it - floated in, charming all by the ease and grace of her airy flight, keeping time to the music of a waltz. She floated like a vision (she is rather a tangible version) from another sphere, who had condescended to take a human shape and appear in a skating rink for our amusement, instruction and - money. Seriously speaking, however, to say that her performances on the castors are good, would be to damn them with false praise. They are really wonderful, and the beholder is astonished and filled with admiration of her perfection in her art, for she has made roller skating her study, and has reduced it to a science... She waltzes, polkas, pirouettes, and performs all manner of gyrations that are scarcely deemed possible and have to be seen to be believed. She is by far the most accomplished skater we ever saw. She was dressed with taste, which added to the charm of her performance." Later that year, she brought her roller skating act to San Francisco, California. 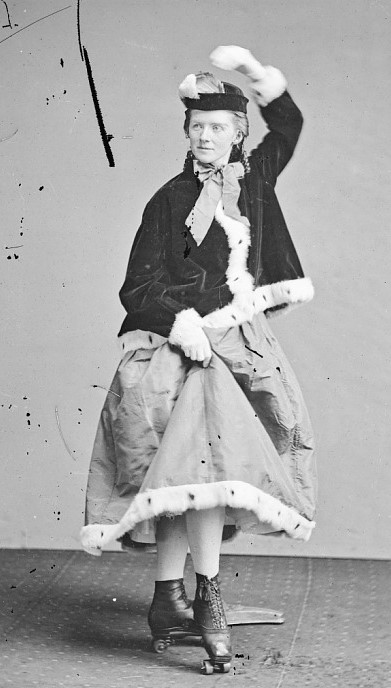 On August 24, 1872, Carrie married Charles E. Lovett and the following year Carrie put together an ice and roller exhibition tour of Europe (varying dependent on which venues were available) with her newlywed husband, Callie Curtis and E.T. Goodrich (former competitors of Jackson Haines), paving the way for Mabel Davidson and her family to tour London and Paris over two decades later. Europe is where the trail seems to end in the story of Carrie. We do not know much about her later life or her death, so I am going to just assume the best of this groundbreaking skater.

Maybe somewhere in the foothills of the Alps in some small village there is a one hundred and seventy six year old woman still waltzing on Wednesdays in her roller skates and three turning on Thursdays in her ice skates. Stranger things have happened in this sport. Adelina Sotnikova, Olympic Gold Medallist? If you asked me a couple of years ago, I would say that a one hundred and seventy five year old Carrie Augusta Moore on a Carrie Augusta Tour would be more plausible.

Skate Guard is a blog dedicated to preserving the rich, colourful and fascinating history of figure skating and archives hundreds of compelling features and interviews in a searchable format for readers worldwide. Though there never has been nor will there be a charge for access to these resources, you taking the time to 'like' on the blog's Facebook page at http://www.facebook.com/SkateGuard would be so very much appreciated. Already 'liking'? Consider sharing this feature for others via social media. It would make all the difference in the blog reaching a wider audience. Have a question or comment regarding anything you have read here or have a suggestion for a topic related to figure skating
history you would like to see covered? I'd love to hear from you! Learn the many ways you  can reach out at http://skateguard1.blogspot.ca/p/contact.html. 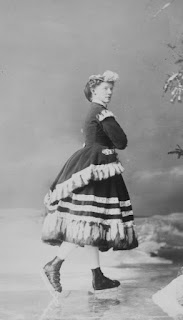