"When I started to skate I had a coach who used to grab my arm and push it back close to my side when I finished a movement with it in the air. It was natural to me that way, but he hated it. It drove him crazy. 'Don't skate like that, John,' he said. 'Why must you be like that?'" - John Curry

On April 1, 2001, The Netherlands became the first country in the world to legalize same-sex marriage. It was no April Fool's Joke. In the next five years, Belgium, Spain, Canada and South Africa would quickly follow suit. As the world has evolved, figure skating has followed that ebb in the tide and adopted non-discrimination and anti-bullying policies. There are no angry mobs from the Westboro Baptist Church picketing a men's short program but for a sport that loves its sequins and jazz hands, we aren't quite at the stage of embracing same sex ice dancing again - just yet.

Members of the LGBT community comprise an extremely large faction of the sport's viewership. There are countless sisters doing it for themselves on the ice and in the coaching and judging worlds. Yet, the long history of a certain demographic in the skating world turning up a nose at males with a little spring in their steps is absolutely an echo that still painfully resonates. Mary Louise Adams addressed the history of the skating's reluctance to embrace skating's - ahem - more feminine side in her meticulously researched 2011 book "Artistic Impressions: Figure Skating, Masculinity, and the Limits of Sport". Blair Blaverman eloquently called out the glittery elephant in the room in his 2014 Buzzfeed article "Why Is The World's Gayest Sport Stuck In The Closet?" Two years later, Eric Radford and Adam Rippon, two of North America's elite skaters are out, proud and winning medals in international competitions. The consensus of many - and rightfully so - is "who cares about people's personal lives? It's what they do on the ice that counts." It's not that simple.

When professional figure skating became serious show biz back in the thirties, there were grumblings that Sonja Henie - with her lavish ice shows - was to blame for a 'sissy' trend in skating. In the December 21, 1938 issue of The Free Lance-Star, reporter Gayle Talbot bemoaned, "Henie must be charged with having a made a lot of... fancy Dan's out of this country's ice skaters."

A decade before the Stonewall riots in the late fifties, heterosexual dancers and skaters alike started piping up and defending the masculinity of their mediums. In a 1957 newspaper interview, reporter Earl Wilson asked dancer Gene Kelly the question, "You admit there are some raving sissies in the shows?" Kelly responded, "Yes, but what about your real men like Fred Astaire, Ray Bolger and guys like that? My brother Fred and I used to do a roller-skating act. We tapped danced on roller skates. Does that sound effeminate? I belted a guy in a night club for saying it about me. I was in Sharon, Pa. I went over and hit him and then I quit the job which I needed very much. I wouldn't do it now, but I still wonder why dancing has to have the stigma of sissyism attached to it."

That same decade, Olympic Gold Medallist Dick Button's coach Gustave Lussi claimed to have introduced "the masculine style, as becomes the athlete on skates" noting that there "is poetry in skating, but there is strength too." In 1969, Tim Wood said, "I think there was a time that figure skating was regarded as an effeminate sport and most of the guys looked down on the men who got into it, but no more." Nine years later, Charlie Tickner waxed in "The Day" that "the rap was that all male figure skaters were effeminate. So to counteract that, male figure skating became just a lot of strong moves and high jumps. Then John Curry and Toller Cranston began expressing themselves to music. It took some time but the judges came around."

In 1969, a skating instructor and minister at a Spiritualist church named Marion Proctor penned an instructional book called "Figure Skating". In an attempt to draw more young men to the sport, she made a point of clarifying that figure skating wasn't a "sissy" sport. Heaven forbid! 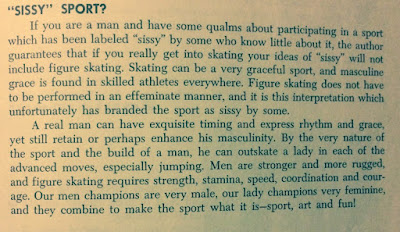 In his controversial February 12, 1976 article "John Curry's Path To Gold Strewn With Judges' Bias", Associated Press writer John Vinocur wrote, "The way [John] Curry skates... has been considered an insurrection, an offense, by the most crotchety of the figure skating judges. A German named Eugen Romminger two years ago said Curry was not virile enough and, that if he lived a lifetime, he could not vote for Curry as the best skater in the world. A former German champion, Sepp Schoenmetzler, admitted to having an irrational aversion for Curry as a skater. In each case the phrase that was never pronounced, but gnawed at the surface was this: John Curry does not conform to the only model of manliness that the old guard allowed." John Curry was not the only skater of his era the judges could not reach a consensus on.


In a March 2013 interview with PJ Kwong on the Open Kwong Dore podcast, the late, great Toller Cranston recalled his experience at the hands of the judges at the 1968 Canadian Championships in Vancouver, where he finished fourth: "I had marks (and there were twenty competitors) from first until last... from one until twenty. And that is so controversial really, actually so cruel... It was so hard to digest. That said, that event was the fuel that pushed me on for the next fifty years." It can be argued that Curry and Cranston both had the last laugh, winning medals at the 1976 Winter Olympic Games in Innsbruck, but it really wasn't that simple. In a sea of gray, both skaters courageously added bright strokes of colour to the landscape of skating.


John Curry, Toller Cranston, Rudy Galindo, Shawn Sawyer, Johnny Weir... they all have one thing in common. Reporters have termed their styles as "flamboyant". John Blanchette of the "Spokesman-Review" even claimed that Weir was "relentlessly" so. The irony is that these very same "flamboyant" skaters have excelled at interpreting music far better than many of their peers... one of the very things they are required to do.

From John Curry being told that performing spirals after he reached 'a certain age' was inappropriate to coaches choosing soundtracks from "Rocky" and "The Lone Ranger" for young boy's skating programs, there's no denying that the skating world has historically perpetuated a restrained stereotype about what a male figure skater should look like. After all, skaters are often being evaluated by judges that are usually decades older than them. One wouldn't market a Nikki Minaj CD to a seventy year old anymore than they would be putting advertisements for denture adhesive in the latest edition of Teen Scream. If a little boy wanted to skate to Madonna or Britney Spears, there are absolutely coaches out there who would say no... and that's a real shame. Is homophobia rampant in skating in the modern day? Absolutely not. However, if history has one lesson to teach us it is that the skating world has traditionally - and continues to - subtly expect certain things from male skaters. Old habits die hard.

Skate Guard is a blog dedicated to preserving the rich, colourful and fascinating history of figure skating and archives hundreds of compelling features and interviews in a searchable format for readers worldwide. Though there never has been nor will there be a charge for access to these resources, you taking the time to 'like' on the blog's Facebook page at http://www.facebook.com/SkateGuard would be so very much appreciated. Already 'liking'? Consider sharing this feature for others via social media. It would make all the difference in the blog reaching a wider audience. Have a question or comment regarding anything you have read here or have a suggestion for a topic related to figure skating history you would like to see covered? I'd love to hear from you! Learn the many ways you can reach out at http://skateguard1.blogspot.ca/p/contact.html.
Posted by Skate Guard Blog at June 14, 2016
Email ThisBlogThis!Share to TwitterShare to FacebookShare to Pinterest
Newer Post Older Post Home