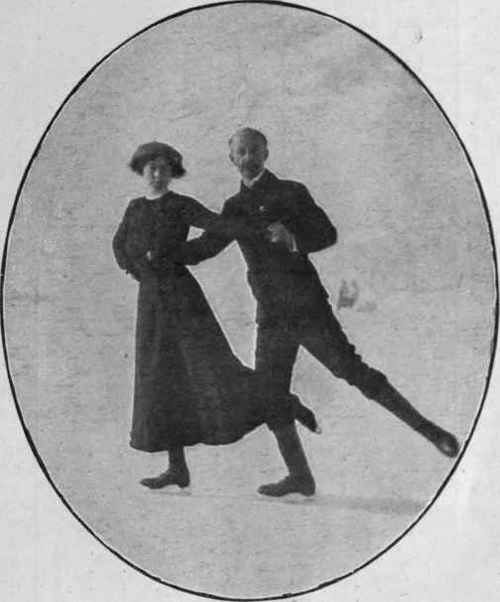 Few historical glimpses of figure skating's rich history neglect to touch on the story of Madge Syers, the first woman to compete at the ISU's World Figure Skating Championships. Although (as Nigel Brown's 1959 book "Ice-Skating: A History" reminds us) "Miss A. Malmgren of St. Petersburg competed against some of the finest men skaters of the day in an international competition held in 1890 in the Russian capital", Madge Syers has been rightfully honoured for her important role in the development of a competition for women in ISU competition. Although we first explored her story back in 2013 in "Spotlight On Madge Syers: The Mother Of Figure Skating", I want to take the opportunity today to explore some fascinating new information that has recently been discovered about Madge Syers' private life. 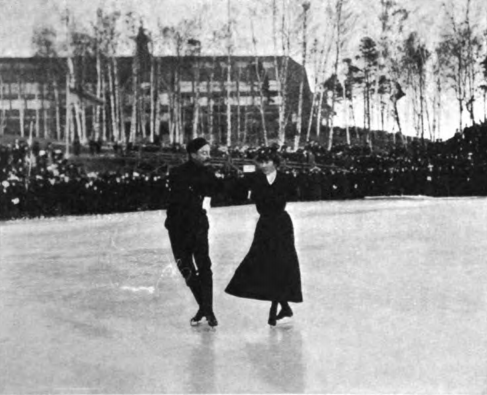 Madge's father, Edward Jarvis Cave, was born in September 1840 in Leicester, Leicestershire, England. Ashworth Mansions blog tells us that "Edward Cave was born in Leicester but made and then lost his fortune in London. Beginning with just £100, he played a critical role in developing middle class flats and was responsible directly or indirectly for most of the blocks in and around Maida Vale and West Hampstead.  By 1889 he was promoting a company to buy up a number of pubs and restaurants including the Angel, Islington. In 1898 he was raising money for the Hampstead Electric Supply Co – which was supplying over 500 houses by this time using his new blocks as captive customers. Cave was a sharp operator. In 1895, he worked with Boehmer and Gibbs to build a row of shops on Kensington High Street. The client was Jubal Webb, a celebrity cheese-monger. Webb was a showman who had exhibited the world’s largest cheese at the Chicago World Fair in 1893 and whose address for telegraphs was 'Gorgonzola London'. Webb asked Cave to insert a restrictive covenant  explicitly forbidding any other cheese seller from taking one of the premises. Cave persuaded Webb that such a clause was not necessary and then promptly sold one of the leases to Hudson – a rival cheesemonger. Jubel Webb sued. And lost. Edward Cave went bankrupt in 1900 with liabilities of over £500.000. Throughout his career, he had built with borrowed money. Things began to go wrong in 1896 with the development of Broad Street House in the City. Cave was forced to sell this development at a loss and was also hit by a failed attempt to rebuild the Black Lion pub in West Hampstead. Then, having overbuilt, he couldn't find tenants or purchasers for a number of his appartment blocks. Though his fortunes declined, Edward Cave kept on spending. His personal outgoings were a prodigious £4.000 a year. This included a house at the seaside, a share in a shooting box, expenses to maintain various ladies under his protection and, for his amusement, a 375 acre farm in Hampshire. At the time of his bankruptcy he was building a mansion for himself in Hampstead complete with stables and wineries. Edward Cave's financial collapse also brought down two of his sons. Henry Jarvis Cave built Lauderdale Mansions in which he lived. But he could not let the flats at high enough rents and was declared bankrupt in 1903. Henry stayed trading a little longer than his brother Edward Athelstan Cave whose 'rash and hazardous speculation and unjustifiable extravagance in living' forced both bankruptcy and a move from his Hampstead mansion to the comparative squalor of Flat 57 Biddulph Mansions. Edward Cave's daughter, Florence, was rather more fortunate. She won the figure skating gold medal in the 1908 London Olympics under her married name of Madge [Syers]. Cave sold the lease on Ashworth Mansions and some other blocks to Harry Charles Costello Shaw, doctor turned property investor. Shaw kept a close eye on his flats but was much too grand to live in an apartment, instead residing in a splendid villa at 125 Maida Vale with his large family and five servants. After the bankruptcy, the Cave property empire was packaged into a new company called Mansions Consolidated Ltd which operated a number of blocks in Hampstead, Highgate and Maida Vale, including Ashworth, Biddulph, Elgin and Lauderdale Mansions. Mansions Consolidated, itself, went into liquidation in 1910 but did not disappear without trace. Notably, it made a major contribution to the financial ruin of its chairman, Dan Harries (DH) Evans, the department store magnate, who was finally declared bankrupt in 1915. DH Evans founded his store on Oxford Street in 1879 with just £1.500 and sold it, just fifteen years later, for £160.000. Once a wealthy man, D.H. Evans died in penury having lost all his money speculating in London property. Mansions Consolidated cost him, personally, £65.000. Mansions Consolidated also left its mark in property law due to a test case at Lauderdale Mansions that is still cited today. Frederick Jaeger, tenant of flat 161, complained that some other apartments were being used 'as places of meeting between men and women for improper purposes.' He refused to pay his rent as his quiet enjoyment of the property was being interfered with. The judge ruled that the landlord was not responsible for any disturbance caused by other tenants unless this had been actively encouraged by him." 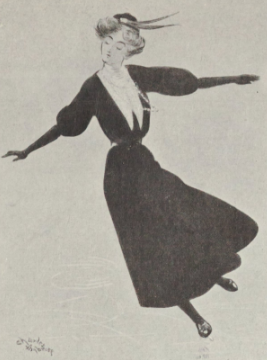 Here's where things get even more scandalous. Genealogical records recently uncovered by BIS historian Elaine Hooper suggest that at the exact same time Madge's father Edward was married to her mother Elizabeth Ann Chapman, he had a second family on the go in Hanover, Middlesex, England. Madge was the tenth of Elizabeth Ann and Edward's twelve children, the last being born in 1884. However, between 1896 and December 1910, Edward Cave fathered another ten children with Pauline Bretzfelder. When Madge's mother Elizabeth Ann passed away on May 8, 1909, Edward Cave wasted no time in marrying Pauline. When I say wasted no time, I mean there wasn't even a mourning period. He waited a month.

Elaine gleaned some wonderful further insight into Madge's family life from primary sources: "Edward Cave may have been made bankrupt in 1900 but in the 1901 census they were still living in Hampstead, having moved from Chislett Road and downsizing so much that they now only had two servants, a cook and a housemaid! It seems that bankruptcy did not leave them poor. BIS' 1896 to 1902 membership books note that Madge and two of her sisters were residing at Westgate, Chislett Road, West Hampstead. This has since been renamed Compayne Gardens and all the house are exceedingly large and have now been converted into very expensive apartments. The 1891 census has them living at 78 Portland Square and they have a butler, a cook and two housemaids. When Edward died he lived in Twickenham. All of the above, were then and are now fairly exclusive areas. You would certainly need plenty of money to afford property there. When Madge died she was living in St. George's Way, Weybridge in Surrey. These days, St. George's Way is a gated community and the large old houses are still single dwellings, mostly occupied by the rich and famous. I have seen a copy of Madge's will in the National Archives and when she died she left £975-7s-6d (old money £975-72p). I would think that would have been quite a lot of money in 1917." In case you're wondering, with inflation Madge's estate would be considerably over one hundred thousand dollars in present day. 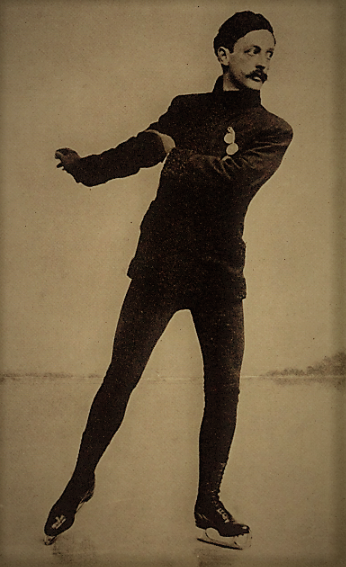 But what of Madge's skating partner and widower Edgar Morris Wood Syers? We know he was one of the most passionate advocates of the Continental Style, that he coached and wrote prolifically about skating and that he had a thing for the younger ladies, Madge being twenty years his junior. Much like Madge's father, Edgar didn't waste much time in remarrying after his wife's death either. In 1921, fifty eight year old Syers tied the knot in Brentford, Middlesex, England, this time to twenty one year old Eva V. Critchel. Edgar lived into his eighties and died in early 1963 of natural causes.

In the 1908 book "Book Of Winter Sports", which Madge co-authored with Edgar Syers, she said that "many Englishwomen have become remarkably proficient, equal, indeed, to any but the very best of the other sex. Skating is an exercise particularly appropriate for women; it requires not so much strength as grace, combined with a fine balance, and the ability to move the feet rapidly. In these qualifications a woman has often the advantage, particularly in our own country, as Englishmen are usually inclined to be rather slow and heavy skaters." Knowing a little more about the men in her life, one almost has to wonder if that last jab was partially coloured by Madge's impressions of men in general. I think we can safely speculate that she probably put up with a lot.

Skate Guard is a blog dedicated to preserving the rich, colourful and fascinating history of figure skating and archives hundreds of compelling features and interviews in a searchable format for readers worldwide. Though there never has been nor will there be a charge for access to these resources, you taking the time to 'like' on the blog's Facebook page at http://www.facebook.com/SkateGuard would be so very much appreciated. Already 'liking'? Consider sharing this feature for others via social media. It would make all the difference in the blog reaching a wider audience. Have a question or comment regarding anything you have read here or have a suggestion for a topic related to figure skating history you would like to see covered? I'd love to hear from you! Learn the many ways you can reach out at http://skateguard1.blogspot.ca/p/contact.html.
Posted by Skate Guard Blog at July 26, 2016
Email ThisBlogThis!Share to TwitterShare to FacebookShare to Pinterest
Newer Post Older Post Home