"It's not the sign that ice is firm,
Nor cold wave worth berating,
When Charley does the inside edge
And spends the night in 'skating.'"

Founded in 1854, Omaha, Nebraska was a popular transportation hub during the nineteenth century. The city was the birthplace of U.S. President Gerald Ford, actors Marlon Brando and Montgomery Clift and dancer Fred Astaire. Nearby Lincoln, Nebraska today plays host to The National Museum of Roller Skating, America's only museum dedicated to preserving the history of ice skating's 'sister sport'. Although roller skating history may reign supreme in Nebraska today, the early history of ice skating in The Gateway To The West is a colourful one certainly worth exploring.

A mere thirty years after Omaha was founded, ice skating was already so popular among its residents that a covered rink was opened on St. Mary's Avenue. "The Omaha Bee" on January 4, 1884 advertised, "Plenty skates, ice good, rink well lighted and dressing rooms well heated. St. Mary's avenue rink." Despite this early effort, in the harsh winters of the late nineteenth century and early twentieth century, skaters in the city were more drawn to ponds and lakes. 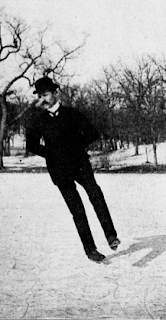 The 'Old Muddy' Missouri River and Cut Off Lake weren't really considered safe locations for skating even in the coldest temperatures. The ice was rough, often covered in sand and snow and there were often numerous air holes. Carter Lake, Lake Manawa and Miller Park were well-loved skating spots in Omaha but by far, the circular lake in Hanscom Park was considered prime skating territory. Protected by huge oak and elm trees, the frozen lake was maintained by the city's park commission and flooded twice a week during cold weather at a cost of up to five hundred dollars... in the late nineteenth century! Fires were built on the shore of the lake for warmth, skates were available for rental and the Omaha & Council Bluff Street Railway Company even took out advertisements in local papers suggesting that skaters "take a street car" when ice conditions were favourable in the winter months. 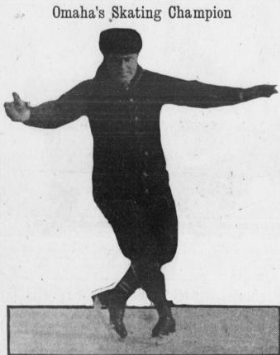 Skate sailing was one novelty that caught on particularly in the city but without a doubt, in the late nineteenth century and early twentieth century, figure skating was more popular than speed skating and ice hockey combined. Omaha's earliest documented figure skating star was a Coca Cola representative named G.C. Vaughn who was known simply as Pete. He was a popular draw at Hanscom Park, where he demonstrated his fancy figures and even reportedly performed "the sensational trick off whirling a girl or boy around his head" like Norval Baptie and Gladys Lamb. On more than one occasion, city police refused to allow him to perform his feats on ice because too many skaters would crowd one part of the ice to watch, bearing the ice unsafe. On January 9, 1916, the "Omaha Daily Bee" proudly exclaimed, "New York can boast of its [Irving] Brokaw and its [Norval] Baptie and its Charlotte and the rest of its assembly of expert and fancy skaters, who step forth on an ammonia rink and cut innumerable and unfathomable figures on the ice, but Omaha lays claim to the amateur champion at fancy skating."

In Omaha, skating wasn't all fun and games. In December 1910, one John Piper pleaded guilty to the charge of assault and battery when he struck a laundry worker named W.H. Mick across the eye with his skate in a jealous rage while skating in Hanscom Park. On December 16, 1910, the "Omaha Daily Bee" noted, "The prisoner explained that Mick had become escort to a young woman to whom Piper was giving attention. The disappointed swain then followed the pair from the park and attacked Mick at Twenty-ninth and Castellar streets. He was fined $25 and costs by Judge Crawford." I don't know about you, but twenty five dollars seems like a pretty light sentence for slashing someone in the eye with a skate!

In 1939, the Figure Skating Club of Omaha was established. Its skaters first took to the ice on the flooded tennis courts at the Omaha Country Club. Two years later, three time Olympic Gold Medallist Sonja Henie made her first and only appearance in the midwestern city... and literally melted hearts. The Nebraska State Historical Society noted, "Her agent asked Nebraskan Barney Oldfield to help publicize the show. Oldfield decided to present Henie with a green, heart-shaped ice sculpture. The frozen heart quickly began to melt, foiling the skater's attempt to autograph it with a heated nail. Oldfield vowed to keep the heart in Omaha until Henie returned, but she never did. After Henie's death in 1969 Oldfield returned to Omaha to place a rose on the now shrunken sculpture. In 2003 the heart was missing from its cold storage site."

In 1949, an outdoor oval skating rink was built behind the Coliseum and Physical Education building on the city's university campus. It was flooded by the Lincoln Fire Department. Almost twenty years later, Omaha played host to a major figure skating competition for the very first time: the 1967 U.S. Figure Skating Championships. There was considerable pressure for the untested host city, as at the time the U.S. Figure Skating Association had a rule that the club sponsoring the U.S. Championships had to guarantee at least five thousand dollars in profit to cover expenses. In a 2013 interview with Erin Golden, Joan Lubischer recalled, "I remember the skaters were a little leery of coming to Omaha, Nebraska... and they were absolutely astounded at the wonderful ice we had." In the end, the event was a roaring success. The six thousand, one hundred seat Ak-Sar-Ben Coliseum was sold out as skating fans watched Peggy Fleming win her fourth U.S. title and the fire marshal even allowed two thousand additional 'standing room only' tickets to be sold. Gary Visconti, Cynthia and Ron Kauffman and Lorna Dyer and John Carrell claimed gold medals in the men's, pairs and ice dance competitions. The U.S. Champions in all four disciplines in Omaha all went on to medal at the World Championships that year... a feat that has yet to be duplicated since.

Skate Guard is a blog dedicated to preserving the rich, colourful and fascinating history of figure skating and archives hundreds of compelling features and interviews in a searchable format for readers worldwide. Though there never has been nor will there be a charge for access to these resources, you taking the time to 'like' on the blog's Facebook page at http://www.facebook.com/SkateGuard would be so very much appreciated. Already 'liking'? Consider sharing this feature for others via social media. It would make all the difference in the blog reaching a wider audience. Have a question or comment regarding anything you have read here or have a suggestion for a topic related to figure skating history you would like to see covered? I'd love to hear from you! Learn the many ways you can reach out at http://skateguard1.blogspot.ca/p/contact.html.
Posted by Skate Guard Blog at July 28, 2016
Email ThisBlogThis!Share to TwitterShare to FacebookShare to Pinterest
Newer Post Older Post Home
"As a rule an author has one or two popular ways of contrasting the past with the present. He can treat the past as lying in comparative doleful ignorance, or he can explain that the past was infinitely superior to the day we live in. Of course, either method is the popular journalism of the moment, and in reality there is no sharp contrast, but a gradual transition which leads the past into the present." - Joel B. Liberman, Skating Club Of New York