How The Open Marking System Got Its Start 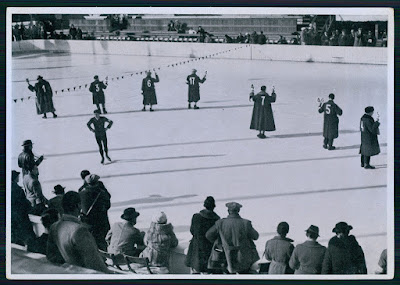 "A swiftly moving free skating program passes like a film, you have to take everything of it in split seconds and only in the well trained judge's mind will everything register as far as the human mind is able to register the multitude of quickly similar following moves." - Willy Böckl, 1940, "How To Judge Figure Skating"

Although an early incarnation of the 6.0 judging system was first introduced to amateur figure skating competitions in 1901, for the first thirty years that it was in place the average skater had zero concept of how they were being scored. Results were usually released well after each segment of competitions and a "4.9, 5.1" were never held up on placards by rinkside judges. "Originally, the judges marks were kept in absolute secrecy, so far as the skaters and the public were concerned," explained American skating judge Joel B. Liberman in 1946.

Although it had already been used for several years in Sweden and tested at the World Championships in pairs skating in 1934, it wasn't until 1936 that the Open Marking System was officially introduced in international competition. It was adopted by the International Skating Union at their 1935 Congress. At first, some judges were completely overwhelmed by the pressure of having to think so quickly on their feet. Charlie Morgan Rotch, who judged the men's, women's and pairs events at the 1936 Winter Olympic Games in Garmisch-Partenkirchen, Germany recalled, "It was the first time I had used the Open Marking System. It was a mad scramble, for, before the skater had barely finished a figure, the judges were asked to hold up their cards, and we had no time to digest what the skater had done. The same was true of the free skating - the whistle blew for the judges to line up and hold up their marks, first for Program and then for Performance, before the skater was even off the ice."

Despite Rotch's misgivings, the system took off and was also used both an ISU/IEV and nationally modified versions at the 1936 World Championships, 1937 U.S., North American, European and World Championships. The Amateur Skating Association of Canada first introduced open marking at a junior club competition at the Toronto Skating Club in January 1938. On January 12, 1938, "The Montreal Gazette" reported, "Under the open marking system, each judge is equipped with a box in which are two sets of large figures, each coloured differently. At the conclusion of the judging of any figure, each judge pulls from the box the figures he has credited the competitor. Spectators see the cards. Officials of the Toronto club said in this way the public gains an idea of the scoring and that the system acts as a deterrent against any judge being discriminatory." Even in 1938, most people 'got' that transparency could only help the sport.

In its infancy, reception towards the Open Marking System was for the most part fantastic. In her book "Figure Skating History: The Evolution Of Dance On Ice", Lynn Copley-Graves noted, "Comments on its use had been overwhelmingly favourable, mentioning more accurate judgment, more honesty and less fixing of the results, and increased interest for all, especially for the spectators." By 1946, Joel Liberman was boasting, "The open system has been modified for convenience and time saving, but essentially it has persisted through more than 35 competitions." However, open marking did have its detractors both in Europe and North America. Notably, one article critiquing open marking appeared in "The Skating Times" in 1938. It was penned by an author who ironically hid behind the cloak of anonymity - using the pseudonym 'A.B.C.' - to complain about transparency.' He or she bemoaned that judges often got carried away and boxed themselves in by giving extremely high marks mid-competition and unable to make use of an eraser, found themselves in sticky situations they couldn't get themselves out of. 'A.B.C.' cited one mid-thirties competition where a skater was given two 6.0's when four skaters (one of them being Cecilia Colledge) hadn't even skated yet. In "Skating" magazine, John Machado argued that some judges were "prone to attribute a certain amount of rubbing and changing to dishonest fixing of results" and that transparency was the lesser of two evils.

Open marking ultimately transformed skating into a sport beloved by millions that survived countless controversies and evolutions until good old Ottavio Cinquanta rather inexplicably decided to kick it to the curb in the twenty-first century after 'ye olde Salt Lake City debacle'. With the recent decision to ditch the anonymity under 'the new judging system' that unfortunately persisted during Cinquanta's reign of terror, we can only hope a return to transparency will serve skating with the same boost in popularity that it afforded back in the thirties and forties.

Skate Guard is a blog dedicated to preserving the rich, colourful and fascinating history of figure skating. Over ten years, the blog has featured over a thousand free articles covering all aspects of the sport's history, as well as four compelling in-depth features. To read the latest articles, follow the blog on Facebook, Twitter, Pinterest and YouTube. If you enjoy Skate Guard, please show your support for this archive by ordering a copy of the figure skating reference books "The Almanac of Canadian Figure Skating", "Technical Merit: A History of Figure Skating Jumps" and "A Bibliography of Figure Skating": https://skateguard1.blogspot.com/p/buy-book.html.
Posted by Skate Guard Blog at July 19, 2016
Email ThisBlogThis!Share to TwitterShare to FacebookShare to Pinterest
Newer Post Older Post Home