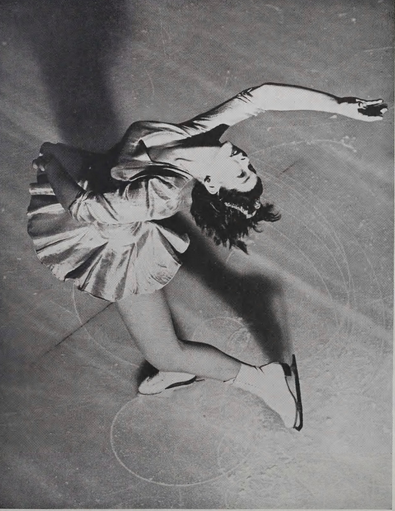 Born December 30, 1931 in Prague, Czechoslovakia, Jiřina Nekolová (like the Jelinek's) would have survived both the Nazi and Soviet occupations of her country in her youth. She found solace on the ice, practicing skating and ballet five hours a day under the watchful eye of Dr. Vladimir Koudelka and showed great promise, finishing a strong fifth at the 1947 European Championships and tenth at the 1947 World Championships. However, she was skating in Czechoslovakia in the height of Ája Zanová's success and in order to give her an edge, she was granted permission to train alongside Barbara Ann Scott at the Schumacher Summer Skating School in Timmins, Ontario the summer prior to the 1948 Winter Olympic Games in St. Moritz, Switzerland. 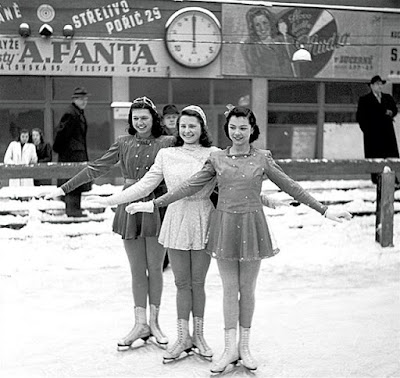 After finishing fourth at the 1948 European Championships in her home city behind Scott, Eva Pawlik and Ája Zanová, Jiřina travelled to Switzerland to compete in the 1948 Winter Olympics and the 1948 World Championships in Davos Platz that followed. Her hard work in Canada paid off. She bested Ája Zanová at the Olympics, finishing fourth to her teammate's fifth. At the World Championships that followed, she repeated her feat, finishing third and defeating not only Zanová but the Olympic Bronze Medallist, Jeannette Altwegg of Great Britain. At the pinnacle of her success, she hatched a plan. She remained in Switzerland to train and in the early summer of 1948, boarded a plane to England with two other Czechoslovakian skaters under the guise of training on Britain's indoor rinks to become the next World Champion after Scott retired. 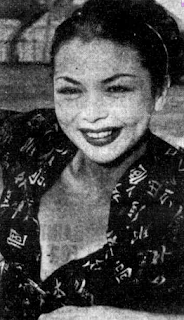 Biding her time, Jiřina travelled to Milan and Paris, where she finished fourth at both the European and World Championships. Returning to England, she decided to pull a fast one on Czechoslovakian officials and refused to leave when the other two skaters from Czechoslovakia training there did. She was adopted by a childless fifty seven year old British major and his wife and applied for British citizenship and asylum in England. Her parents and brother remained in Prague. In doing so, she became one of the first figure skaters in history to defect from a Communist regime.

The December 19, 1949 issue of "The Mercury" noted that "pretty dark-haired Jiřina said in London that she was following the example of the Czech tennis stars Drobny and Cernik, because in Prague 'even prizes in skating go to Party members.'" Two days later, she granted an interview to the "Adelaide News", explaining "I get homesick, but I cannot go back to the Communists. Today I received a letter from my parents demanding that I return at once. I hate to disobey them, but I have to in this case. They realize that I am very young to be away from home and they are naturally anxious. But I cannot go back to communism and I won't. Most of all I love skating, and I must have freedom to skate anytime, anywhere. Communists wouldn't give me that freedom. They don't understand sport. I will tell you another secret. I am in love with Jaroslav Drobny, the tennis player who also refused to go back because of the Communists." 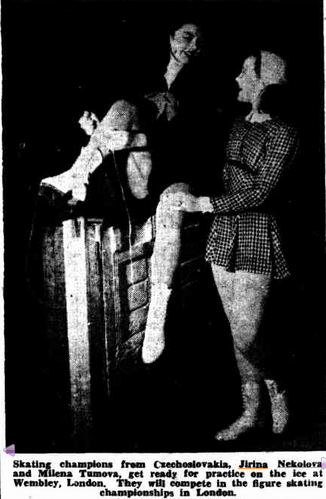 Jiřina didn't marry Drobny. Instead, in Surrey in January 1950, she married an Australian professional skater born in England named Ronald Priestley and retired from competition after plummeting in the standings after the figures and finishing a disappointing eighth at the 1950 World Championships at the Wembley Arena. 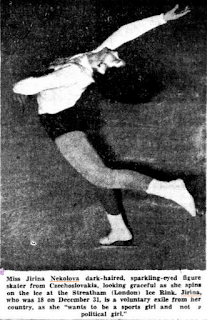 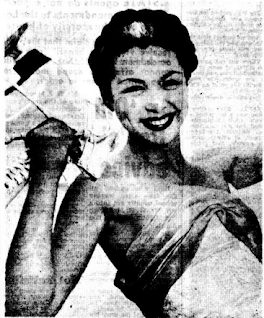 Jiřina turned to professional skating, starring in the Ice Capers show at the Westover Ice Rink in Bournemouth, England in 1951 and even making an appearance on the BBC. In 1953, she travelled on the S.S. Strathmore to Australia to perform there. On December 12, 1953, "The Argus" reported that on the way "every day, Czechoslovakian ice-skating ballerina and Olympic champion, Jirina Nekolová, gave them a 'five-hour-show', flitting over the decks as she practiced her ballet." At age twenty one on December 24, 1953, she opened with Reg Park in Cinderella On Ice, an ice pantomime at the Princess Theatre in Melbourne, Australia. She played the role of The Spirit Of Christmas. "The Age", on Christmas Eve 1953, remarked that "she is a ballerina on ice, combining considerable artistry with high technical standards as a skater." The following year, Jiřina and Ron Priestley divorced in London. According to "The Truth" on October 3, 1954, "Priestley was granted a decree on the grounds of [Jirina]'s misconduct. She did not defend the petition. The judge also exercised his discretion regarding misconduct by Priestley." She was Priestley's third wife. 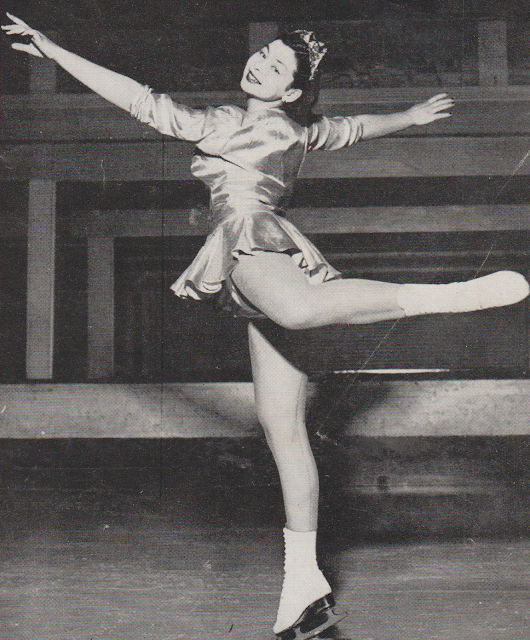 One of the last traces I was able to find of Jiřina's story came two years later, when she appeared alongside Emmy Puzinger, Fernand Leemans and members of the Vienna Ice Revue in Franz Antel's 1956 film "Symphonie in Gold". Although it's presumable that alongside that company, she most likely skated with the Vienna Ice Revue for a time, she seemed to fall off the radar... and perhaps with good reason. She passed away on May 25, 2011 in Kolin, Czech Republic at the age seventy nine, which of course tells us that at some point she went back - either by choice or force - to the very country she never wanted to return to. Life works in mysterious ways.

Skate Guard is a blog dedicated to preserving the rich, colourful and fascinating history of figure skating and archives hundreds of compelling features and interviews in a searchable format for readers worldwide. Though there never has been nor will there be a charge for access to these resources, you taking the time to 'like' on the blog's Facebook page at http://www.facebook.com/SkateGuard would be so very much appreciated. Already 'liking'? Consider sharing this feature for others via social media. It would make all the difference in the blog reaching a wider audience. Have a question or comment regarding anything you have read here or have a suggestion for a topic related to figure skating history you would like to see covered? I'd love to hear from you! Learn the many ways you can reach out at http://skateguard1.blogspot.ca/p/contact.html.
Posted by Skate Guard Blog at August 20, 2016
Email ThisBlogThis!Share to TwitterShare to FacebookShare to Pinterest
Newer Post Older Post Home
"As a rule an author has one or two popular ways of contrasting the past with the present. He can treat the past as lying in comparative doleful ignorance, or he can explain that the past was infinitely superior to the day we live in. Of course, either method is the popular journalism of the moment, and in reality there is no sharp contrast, but a gradual transition which leads the past into the present." - Joel B. Liberman, Skating Club Of New York