In the infamous words of Sophia Petrillo, "Picture it... January 17, 1888". Citizens of Portland, Oregon came to terms with an unusual blast of West Coast winter. Snowflakes fluttered down from the sky. No trains were expected from the east over the Northern Pacific Railroad; the Oregon Short Line trains were nearly two days behind schedule. The air was brisk. However, the biggest shock as residents looked out their windows that morning was that the Willamette and Columbia rivers were blocked with ice. Even more unusually, further down the coast, residents of San Francisco, California got was perhaps their first taste of ice skating. The Wednesday, January 18, 1888 edition of the Los Angeles Daily Herald reported that "Tuesday for the first time in many years, perhaps for the first time on record there was skating in San Francisco. A small party enjoyed a couple of hours skating on the pond at Golden Gate Park this morning." The Friday, January 20, 1888 edition of The Democrat too believed that January 17, 1888's ice skating party might have been "the first, perhaps, in the history of the city."

It would be some years before 'fancy' ice skating would catch on in the city (owing largely to the climate) but the roller skating craze of the late nineteenth century was in full force in California. In fact, roller skates even played an important and unusual role during the aftermath of the 1906 San Francisco 7.8 earthquake and fire that destroyed over eighty percent of the city and killed three thousand people. The March 24, 1912 issue of the San Francisco Sunday Call explained that "The Mechanics' pavilion, then a famous roller skating rink, was destroyed, and the large stock of skates distributed far and wide. Many people used them, fastened to the bottom of heavy packages, as carriages to move their belongings along the street. Thus the roller skate has demonstrated its usefulness in times of stress, as it ever does in more happy moments." 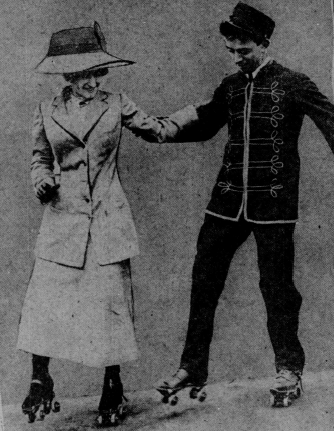 When the city started to rebuild, it wasn't long at all before San Francisco, California recognized the virtues of real figure skating on ice. Only three years after the earthquake and fire, The National Theater in San Francisco played host to one of the state's first ice shows. The Sunday, October 10, 1909 edition of The San Francisco Call reported that "one of the most important offerings in vaudeville will be presented this afternoon at the National theater when [Isabella] Butler and Edward Bassett, champion skaters, will appear in fancy skating on ice. Besides being unusual to see a pond of frozen water on the stage, the exhibition will disclose daring and fancy skating." Butler and Bassett's act caught on and stirred considerable interest. The Bisbee Daily Review on May 14, 1916 noted that several ice skating rinks had already been installed and interest in the city was considerable in starting up an ice hockey league in the Bay City. 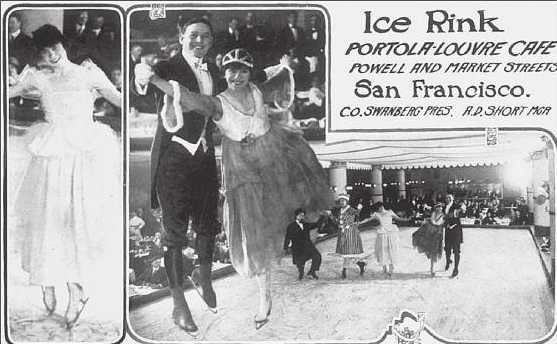 It was during this era that the Portola-Louvre Café on Powell Street opened an ice rink for its customers that became wildly popular. In 1916, the Café Bristol in Los Angeles followed suit, installing a 26 X 60 foot tank for its patrons. The state better known for its stars than Salchows was slowly going skate crazy.


In the fall of 1932, the Skate and Ski Club of San Francisco formed, meeting twice a week at the New Iceland rink on Sutter and Pierce Streets in San Francisco. It was the first club from the Pacific Coast to be admitted to the United States Figure Skating Association. In May 1933, Helen Howes wrote in "Skating" magazine of competitions staged by the California Skating Association, which was not affiliated with the USFSA at the time. The first Pacific Coast Championships were held in Yosemite on January 25, 1936, with Eugene Turner and Mary Taylor emerging victorious.

During the thirties, an ice skating rink was installed in the southern section of the Sutro's Baths resort and became the San Francisco club's home. In her book "Indelible Tracings", Patricia Shelley Bushman offered a wonderful description of the rink: "Getting to the ice at Sutro's was an adventure. Skaters had to bypass the other pools, which had morphed into museums filled with Egyptian mummies, exotic birds, San Francisco memorabilia, and peculiar oddities and photographs from the late nineteenth century. Next came the daunting stairs. The rink was at the bottom of 140 steps, right next to the ocean. The large scenic windows were painted black so that the skaters would not be distracted by the majestic waves, seals basking in the sun, or the incredible view. The Zamboni ice machine shed its snow right on the beach. The ice was uneven at Sutro's because the proximity to the ocean caused constantly varying humidity; the ice tended to crack and the whole ice surface sloped, slanting down in one corner towards the ocean. The rink was noisy. Skaters were bombarded with shrill whistles from the nearby aviary and the roar of the ocean. 'On one stormy day,' a club member said, 'the waves beating against the rocks rose to such a height that they dashed against the windows and showered broken glass over one corner of the rink. However the glass was quickly swept up and the skaters went on about their business.' The skaters loved the space." The revenue from the skating club wasn't enough to keep Sutro's open. It was slated for demolition when it was destroyed in a 1966 fire. The ruins remain to this day and are notoriously reported to be haunted. And you know what? I think that's a great place to leave our reflection on San Francisco's early skating history... with the ghosts of the past.

Skate Guard is a blog dedicated to preserving the rich, colourful and fascinating history of figure skating and archives hundreds of compelling features and interviews in a searchable format for readers worldwide. Though there never has been nor will there be a charge for access to these resources, you taking the time to 'like' on the blog's Facebook page at http://www.facebook.com/SkateGuard would be so very much appreciated. Already 'liking'? Consider sharing this feature for others via social media. It would make all the difference in the blog reaching a wider audience. Have a question or comment regarding anything you have read here or have a suggestion for a topic related to figure skating history you would like to see covered? I'd love to hear from you! Learn the many ways you can reach out at http://skateguard1.blogspot.ca/p/contact.html.
Posted by Skate Guard Blog at September 10, 2016
Email ThisBlogThis!Share to TwitterShare to FacebookShare to Pinterest
Newer Post Older Post Home