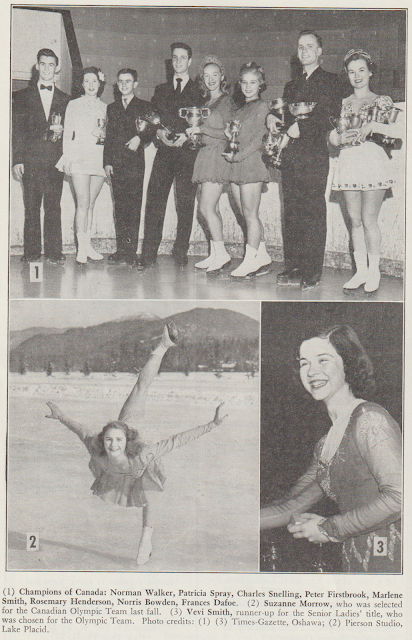 Who's ready to hop in the time machine? Don't all get up at once! Today we're going to take a brief look back at the 1952 Canadian Figure Skating Championships, held January 17 to 19, 1952 in Oshawa, Ontario. With berths on the line for the 1952 Winter Olympics in Oslo, Norway, the competition was not only fierce but controversial as well... but I'll save that part for last. Let's start by taking a quick look at that year's junior competitions! 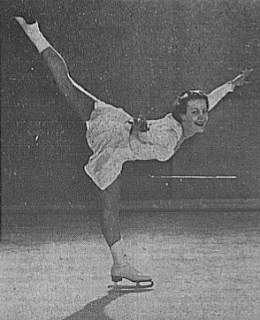 THE PAIRS AND DANCE COMPETITIONS 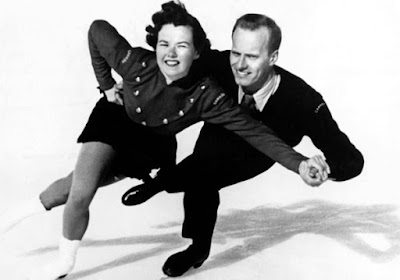 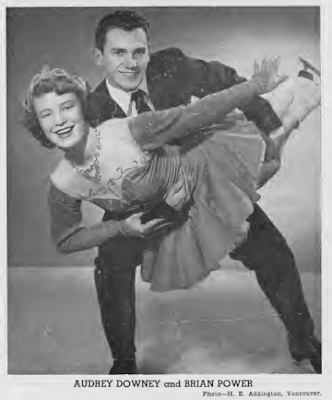 Winning by a landslide in the senior pairs event, Frances Dafoe and Norris Bowden of the Toronto Skating Club dazzled. Their only other competitors that year were Audrey Downie and Brian Power of the Connaught Skating Club in Vancouver. Lynn Copley-Graves' book "Figure Skating History: The Evolution Of Dance On Ice" recounts that the senior "ice dancers were overshadowed by the singles and pairs on their way to the Oslo Olympics. Four couples remained after the eliminations of the three events, i.e. Silver Dance, Waltz, and Tenstep. Frannie Dafoe and Norrie Bowden's successes in all three dance finals and Senior Pairs fave them a total of four Canadian titles in one year." Joyce Komacher and William A. de Nance, Jr. of Toronto and Pierrette Paquin and Malcolm Wickson of Vancouver placed second and third in all three of the dance events. Of the entire pairs and dance flock, Dafoe and Bowden were the only ones assigned to either the Olympic or World team that year.

High school student and defending senior men's champion Peter Firstbrook of Toronto fended off twenty three year old, three time Canadian Medallist Bill Evan Lewis of Vancouver and nineteen year old training mate Peter Dunfield to repeat as the winner. The January 21, 1952 edition of the "Ottawa Citizen" noted that "Firstbrook, 18, a handsome six-footer, piled up a decisive 36.3 lead in the school figures and took an easy victory over two other competitors... Firstbrook, who fell after stepping onto the ice without removing one of his blade protectors, retained his crown hands down." Like Dafoe and Bowden in the pairs, Firstbrook would be the sole men's entry to the Olympics in Oslo and the World Championships in Paris. 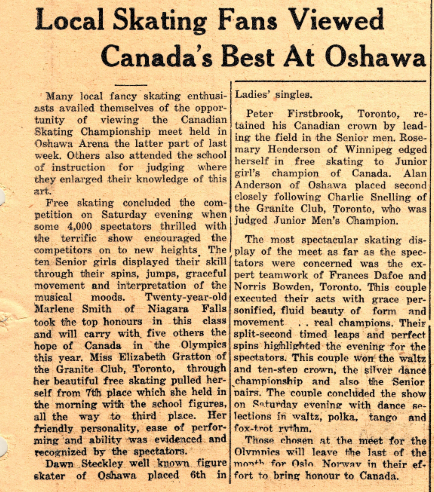 Clipping from the January 24, 1952 issue of the "Orono Weekly Times"

Now here's where it get's juicy. After winning Olympic and World medals in 1948 with pairs partner Wally Distelmeyer, Suzanne Morrow had continued on as a singles skater, winning the Canadian senior ladies title from 1949 to 1951. The twenty one year old skater, based on experience (and fourth place finishes at the last two World Championships) was in effect given 'a bye' to the Olympic team and was overseas training in Germany when the Oshawa competition was going on. That left one ladies spot for the Oslo Olympics and ten women eager to snatch it up. In the school figures, nineteen year old Vera Virginia 'Vevi' Smith of the Toronto Skating Club rockered and countered her way to a 7.2 lead over Marlene Smith (no relation!) of the Winter Club of St. Catharine's. Both had previously been senior medallists and junior champions, both had the same last name and both were hungry for the win. In the free skate, Marlene Smith (according to the "Ottawa Citizen") "skimmed to an easy victory as she executed the different leaps and spins of her free-style skating with ease and grace. Dressed in a brief costume of cerise shiffon, her long blonde hair fluttered in the breeze as she skimmed the ice to the accompaniment of Kreisler's 'Liebesfreud'." 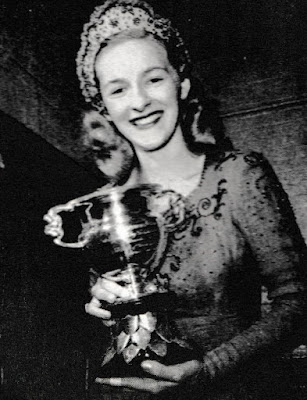 Marlene won the title ahead of Vevi and sixteen year old Elizabeth Gratton of Toronto, who moved up from seventh after the figures to take the bronze. Elizabeth's younger sister Barbara and Maureen Senior placed fourth and fifth. While Marlene celebrated her presumed Olympic ticket, the CFSA was preparing to drop a bombshell. The "Ottawa Citizen" reported that "the Canadian Figure Skating Association executive, in naming the Olympic team, explained that Vevi Smith had been selected even though she hadn't won a championship, because she had racked up a higher score in school figures than any other senior man or woman contender." Things got a little crazy for a while before the CFSA saved face by announcing that both Smith's would ultimately join Suzanne Morrow at the Olympics and Worlds that year. Ironically, it was Marlene that soundly defeated Vevi at both international events.

Skate Guard is a blog dedicated to preserving the rich, colourful and fascinating history of figure skating and archives hundreds of compelling features and interviews in a searchable format for readers worldwide. Though there never has been nor will there be a charge for access to these resources, you taking the time to 'like' on the blog's Facebook page at http://www.facebook.com/SkateGuard would be so very much appreciated. Already 'liking'? Consider sharing this feature for others via social media. It would make all the difference in the blog reaching a wider audience. Have a question or comment regarding anything you have read here or have a suggestion for a topic related to figure skating history you would like to see covered? I'd love to hear from you! Learn the many ways you can reach out at http://skateguard1.blogspot.ca/p/contact.html.
Posted by Skate Guard Blog at October 11, 2016
Email ThisBlogThis!Share to TwitterShare to FacebookShare to Pinterest
Newer Post Older Post Home
"As a rule an author has one or two popular ways of contrasting the past with the present. He can treat the past as lying in comparative doleful ignorance, or he can explain that the past was infinitely superior to the day we live in. Of course, either method is the popular journalism of the moment, and in reality there is no sharp contrast, but a gradual transition which leads the past into the present." - Joel B. Liberman, Skating Club Of New York