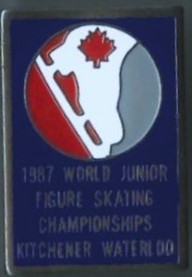 Hailed as the 1987 World Junior Figure Skating Championships though held from November 27 to December 7, 1986, the ISU's 1986/1987 season international figure skating competition for junior skaters seemed doomed from the start. Originally slated to be held in Ostersund, Sweden, the event was pulled from Scandinavia after being awarded due to venue issues. The CFSA and Kitchener-Waterloo Skating Club, whose bid to host the event at the Kitchener Auditorium in Ontario had initially been rejected, were 'regifted' the event with only a year and a half to plan the particulars. Issues with European sponsors, television rights and marketing plagued the event's planning. Ticket sales were also disappointing, with only three hundred spectators flocking to the six thousand seat arena for one part of the competition. Despite the event's seemingly bad luck, the Kitchener event was chock full of fantastic skating. Let's take a look at how it all played out.

Dominating the pairs competition from start to finish - with a quad twist, no less - were defending World Junior Champions Elena Leonova and Gennadi Krasnitski of the Soviet Union. The fearless young team appeared at the time to many to be the logical successors to 1985 World Junior Champions Ekaterina Gordeeva and Sergei Grinkov. The East German team of Mandy Hannebauer and Marno Kreft were second after the short program, but fell apart in the free skate allowing Soviets Ekaterina Murugova and Artem Torgashev and Americans Kristi Yamaguchi and Rudy Galindo to move up and claim the silver and bronze medals. British Columbian pair Jody Barnes and Rob Williams finished seventh, followed by Marie-Josée Fortin and Jean-Michel Bombardier of Quebec in a field of ten.

Yuriy Tsymbalyuk of the Soviet Union, the previous year's bronze medallist at the event, led the entering the men's free skate, bolstered by a win in the compulsory figures. Seventeen year old Rudy Galindo, who had won the silver in 1986, dominated the practice sessions. He psyched out his competitors by reeling off triple/triple combinations that weren't even included in his program. In reality, Galindo presented a less difficult free skate than the previous year. His coach Jim Hulick's strategy to present a more artistic program not overly cluttered with triple jumps paid off, as Galindo moved up to take the gold with a superb performance that featured a triple flip, triple loop, double toe/triple toe and triple Salchow. Fifteen year old Todd Eldredge moved ahead of Tsymbalyuk to take the bronze, ahead of America's Cameron Birky, West Germany's Daniel Weiss and the Soviet Union's Michael (then Mikhail) Shmerkin. Canada's sole representative Brent Frank of North Battleford, Saskatchewan dropped from seventh after figures to ninth overall with a disappointing fifteenth place showing in the free skate. In eighth was a young Eric Millot; in nineteenth a pint-sized Steven Cousins.


Coached by Cynthia Ullman, fourteen year old Shannon Allison of Coquitlam, British Columbia found herself second after the first two figures but dropped to fourth overall at the conclusion of the initial stage of the women's competition with a disappointing final figure. The leaders in the figures were sixteen year old Ondrej Nepela student Susanne Becher of West Germany and sixteen year old Holly Cook of the United States. Four foot eight dynamo Cindy Bortz of Sherman Oaks, California won the short program to place second behind Becher entering the free skate. Both Becher and Bortz landed every single jumping pass in their free skate with aplomb, but Bortz took the gold with a much more challenging performance that included a triple Lutz, triple flip, triple Salchow, two triple toe-loop's and three double Axels. The young powerhouse's only error was an untimely trip on the boards. Becher settled for her third consecutive World Junior silver medal. Allison claimed the bronze ahead of Holly Cook. Sixteen year old Angie Folk, Canada's second entry, dropped from sixth after figures to twelfth overall.


After the compulsory dances, fifteen year old Ilona Melnichenko and seventeen year old Gennadi Kaskov of Odessa lead the way ahead of seventeen year old Catherine Pal of Vaughn, Ontario and eighteen year old Donald Godfrey of Richmond Hill. Pal and Godfrey, students of Roy Bradshaw, had finished seventh at the previous year's World Junior Championships in Sarajevo. Melnichenko and Kaskov won the free dance and gold medal in a unanimous decision from all nine judges. It was their first competition outside of the Soviet Union. The Canadians lost the silver medal in a seven-two split to fifteen year old Oksana Grischuk and seventeen year old Alexandr Chichkov of the Soviet Union. Italians Anna Croci and Luca Mantovani moved up to finish fourth ahead of France's Sophie Moniotte and Pascal Lavanchy. Bradshaw's other team, sixteen year old Jacqueline Petr and eighteen year old Mark Janoschak placed seventh ahead of Krisztina Regőczy's students Krisztina Kerekes and Csaba Szentpetery of Hungary in a field of fifteen.

Skate Guard is a blog dedicated to preserving the rich, colourful and fascinating history of figure skating. Over ten years, the blog has featured over a thousand free articles covering all aspects of the sport's history, as well as four compelling in-depth features. To read the latest articles, follow the blog on Facebook, Twitter, Pinterest and YouTube. If you enjoy Skate Guard, please show your support for this archive by ordering a copy of the figure skating reference books "The Almanac of Canadian Figure Skating", "Technical Merit: A History of Figure Skating Jumps" and "A Bibliography of Figure Skating": https://skateguard1.blogspot.com/p/buy-book.html.
Posted by Skate Guard Blog at March 18, 2017
Email ThisBlogThis!Share to TwitterShare to FacebookShare to Pinterest
Newer Post Older Post Home