The Joseph Chapman Story, Part One 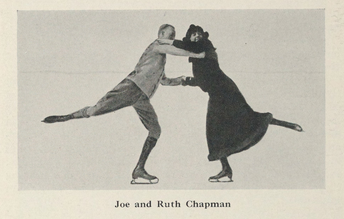 "The sport and art of skating rises ever superior to the enthusiasts who practice it. Yet no one, however small, can fail to add something to it if he so desires." - Joseph Chapman, "Fifty Years Of Skating"

Like The Fresh Prince Of Bel-Air, Joseph Chapman Jr., the son of Joseph and Mary Chapman, was born April 12, 1881 in west Philadelphia. In the summer of 1886, he moved with his family to Lower Merion, a township in Montgomery County, Pennsylvania. It was there, as a boy of five, that he first skated on a pond during the winter of 1886/1887 with his father on the family's private little cement pond. In his autobiographical 1944 memoir "Fifty Years Of Skating", a primary source that I consulted for much of the research in this blog (and will coincidentally quote from heavily), he explained, "My first skates were of the all-steel variety with clamps that bit onto the soles and heels of my shoes, usually pulling the latter off after a time, and were operated by an adjustable lever underneath the foot plate." Although his early skating days consisted mostly of shinny games (a forerunner of hockey) and a game called 'tickly-bender', it wasn't until his father passed away in September 1899 that Chapman got his first taste of 'fancy skating'.

Going against his mother's wishes, he wandered off with his "colored coachman William" to skate on a pond two miles from the family home. Although he fell through the ice in an early visit (which he referred to as his 'baptism' into skating), it was on this pond at the Old Waterworks he became proficient. Inspired by a young man fancy skating there, he taught himself basic figures and the Dutch Roll. In those early days, Chapman also skated on Wissahickon Creek. He recalled, "I can remember how I stood amazed at some of the high speed circling jumps and spins executed by a gentleman of color from Roxborough, who as I was told - was accustomed to entertain, with an attractive conceit, his large crowd of admirers on the Wissahickon Creek down the last stretch where skating was possible before it emptied into the Schuylkill River." His mother, now realizing there was no stopping him, gave him approved club skates for Christmas one year and he learned grapevines and the Philadelphia Twist on these ponds. Among those he skated with was Chris I. Christensen of St. Paul, who would go on to later win the U.S. senior men's title in 1926 at the age of fifty one. 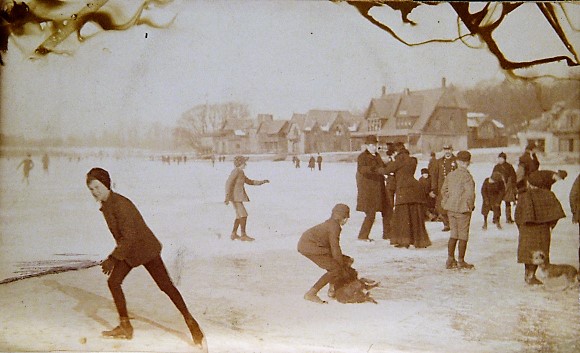 In 1900, Chapman enrolled in Princeton University and stopped skating for some time. After graduating, he practiced law independently, though associated with five other attorneys from the firm of Tustin and Wesley. He became treasurer of his late father's business, Chapman Decoration Co. on Walnut St. in Philadelphia, golfed regularly and even had "sketches and stories" published in Golfers' Magazine, Saturday Evening Post and Philadelphia Sunday Ledger. In Princeton Alumni Weekly, Volume 20, he described "having created a colored character named 'Uncle Jed, Caddie Master". Realizing now that this is not the first, the second, but the third time in three paragraphs that the phrase 'colored' has come up, I want to assure you that I'm shaking my head as much as you probably are reading.


It was while he was still at Princeton that Chapman met his wife Ruth at a house party. They married in June 1908. Ruth was brought up in Boston and was probably the biggest fan of skating going, in particular the International Style being popularized at the time by George Henry Browne and Irving Brokaw, based on the style of Jackson Haines. By the winter of 1908/1909, Ruth had Joseph Chapman back on skates. She can also be credited with getting her brother on the ice in his first small competition on the pond of the Braeburn Country Club in Massachusetts. You may have heard of him... Nathaniel Niles, U.S. men's, pairs and ice dancing champion.

It was around this time that a small and dedicated group of skaters began skating on the ponds at Haverford College and the Merion Cricket Club. They were there for next seven or eight seasons without fail. A man named Harry Thayer converted a small creek which ran past the quarry of the Merion East Golf Course into a skating pond. By the second year, Thayer had suggested Chapman become involved in the organization of the skating at this pond and in 1912, he became chairman, a position he'd hold for approximately the next fifteen years. He recalled, "During the eleven or more years of our outdoor figure skating activities, we struggled with the cold, the wind, the cracks and twigs on the ice, and to some extent with the late Walter Thayer's particular hete noir, i.e. the presence of one or more dogs upon the pond - a thing strictly against the rules. During this time also, my wife and I frequently went to Boston in the winter where they already had an indoor ice rink and several first-class figure skating professionals from Europe, George Muller and his sister, Elsbeth, were among the latter. I also remember Jaycock, who once gave me a half hour lesson in figure skating for one dollar and fifty cents. In this lesson he did all the skating, as I required him to show me a number of 'school figures' that I had read about in the books, but had never as yet seen performed. This is the only lesson I ever took, and I make this statement not as a boast but rather as a contrite confession."

Chapman, like many North American skaters of his day, developed his craft by studying Irving Brokaw's book "The Art Of Skating" and learning of the methods of Brokaw, Nikolai Panin, Ulrich Salchow, Bror Meyer and others. He even self-taught himself the spread eagle based on Henning
Grenander's picture in the book. In turn, he rekindled his own passion for writing, penning pieces regularly in "Skating" magazine and publishing poems about figure skating in the "Philadelphia Evening Bulletin" such as the one below:

Hoar-frost over the meadow;
Tingle and nip in the air;
And down below where the willows grow,
Look for some skating there.

Run for your rusty rocker,
Skates with the sharpest edge;
The ice is black, with never a crack,
Under the old rock ledge.

Pulsing and glowing body;
Glorious healthy "feel;"
The flashing blade, and the crisp sound made
By the cold, keen, cutting steel.

Daring the dangerous "counter,"
Tracing a dizzy edge;
Risking your neck for "her" dear skate,
Under the old rock ledge.

Fast, and faster and faster,
Ankles and arms we'll pledge
To the matchless sport, as the days grow short,
Under the old rock ledge.

In 1916, Joseph and Ruth became members of the Philadelphia Skating Club and Humane Society. He described how an indoor rink was later built on a vacant lot on Market St. between 45th and 46th Streets: "This rink was opened on February 1, 1920, in a rather unfinished condition, and I can see myself the second or third time that I skated upon it - in the rain. No, this is no misstatement because the roof leaked like a sieve and the rain was pouring down upon us as we skated." Although he'd only ever had that one lesson, he started teaching others in a program called The Philadelphia Skating Class. To further his education, Chapman made frequent trips to New York, Brooklyn, Boston and the Cambridge Skating Club, where he hobnobbed with a who's who of skating at the time including his brother-in-law Nathaniel Niles and partner Theresa Weld Blanchard, Maribel Vinson, Sherwin Badger, Roger Turner, Willie Frick, Ulrich Salchow, Ellen Dallerup and Bror Meyer. However, during this same period, he began regularly having heart troubles, suffering from what his doctor called "a strained muscle."

And with that cliffhanger, I think that's where I'll end part one of this story. In part two, we'll explore the meat and potatoes of Joseph Chapman's skating career - competing at the U.S. Championships, his contributions to skating in Philadelphia and (for that matter) North America and for good measure, recall a fabulous Sonja Henie story. Stay tuned!

Skate Guard is a blog dedicated to preserving the rich, colourful and fascinating history of figure skating and archives hundreds of compelling features and interviews in a searchable format for readers worldwide. Though there never has been nor will there be a charge for access to these resources, you taking the time to 'like' on the blog's Facebook page at http://www.facebook.com/SkateGuard would be so very much appreciated. Already 'liking'? Consider sharing this feature for others via social media. It would make all the difference in the blog reaching a wider audience. Have a question or comment regarding anything you have read here or have a suggestion for a topic related to figure skating history you would like to see covered? I'd love to hear from you! Learn the many ways you can reach out at http://skateguard1.blogspot.ca/p/contact.html.
Posted by Skate Guard Blog at March 14, 2017
Email ThisBlogThis!Share to TwitterShare to FacebookShare to Pinterest
Newer Post Older Post Home