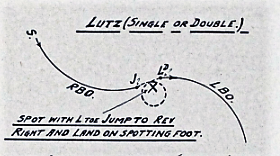 I'll do it for posterity, but judging by how knowledgeable all of you fabulous Skate Guard readers are, I probably don't need to tell you that the Lutz is a toe-assisted jump from a backward outside edge with a complete revolution to the backward outside edge of the other foot. I also probably don't need to tell you that its inventor was an Austrian skater by the name of Alois Lutz. But who was this mystery man and how did his invention get attributed to him?

We know that dear Alois was a skater at the Kunsteisbahn Engelmann (Engelmann rink) in Vienna. Alternating accounts citing a grand total of - wait for it - zero primary sources, alternately trace his grand performance of the Lutz to the years 1913, 1917, 1918 and even 1923, long after his reported death. It's been said he died of pneumonia or the Spanish flu in his early twenties, but again, no primary sources there either. More uncited sources have even claimed Alois Lutz performed the jump during a hockey game, that he was from Switzerland, that he was one of "skating's great champions" and that the inventor of the Lutz' first name was actually not Alois but Alfred. To be blunt, the lack of information about this little known, young skater and the origins of his invention has inspired many writers over the decades to repeat unsourced information or in most cases, just plain make stuff up.

I was able to find - another drumroll please - a total of two primary sources that even confirmed the existence of Alois Lutz as a competitive skater, and they were both from the same competition. He competed in the Herren-Junioren-Kunstlaufen (junior men's class) on January 28, 1917 at the Austrian Championships held at the Engelmann rink. A who's who of Austrian skating including World and European Champion skaters like Fritz Kachler and Eduard Engelmann, Jr. were present. He finished fifth and dead last, behind Karl Krondutl, Heinz Matauch, Emil von Bertanlaffy and Rouland Zlamal. The February 2, 1917 issue of "Illustriertes (Österreichisches) Sportblatt" noted that "the ice conditions were excellent" at this event and gave accounts of the performances of top senior skaters like Gisela Reichmann and Paula Zalaudek but no mention was made of Alois Lutz performing his famous jump. Similarly, the January 29, 1917 issue of "Fremden-Blatt" offers a full, varied account of the competition, lists Alois Lutz in the result lists and gives zero mention of his performance or the jump.

Based on repeated claims that the first skater to perform a double Lutz (in practice) was fellow Austrian Karl Schäfer, I think it's fair to make the assumption that the fact that Alois Lutz even got credit for his invention tied back to the fact that he came up with it at the Engelmann rink in the company of so many influential members of the Austrian skating community. An account from Captain T.D. Richardson in his book "Skating With T.D. Richardson" noted, "There is a popular jump called the Lutz which I first saw performed by that grand skater Paul Kreckow at the Palazzo del Ghiaccio in Milan in the early 20's. It is a joyous affair and should be tackled, once its technique is understood, with complete abandon." The dating of Richardson's recollection implies that it really wasn't long before the jump's popularity spread internationally.

The fact that Alois Lutz, an unheralded junior skater, invented a jump that's a mainstay of figure skating today and was actually credited for it should be an inspiration to all young skaters even today to get out there and try new things in the air. If that's not a motivation to make history, what is?

Skate Guard is a blog dedicated to preserving the rich, colourful and fascinating history of figure skating and archives hundreds of compelling features and interviews in a searchable format for readers worldwide. Though there never has been nor will there be a charge for access to these resources, you taking the time to 'like' on the blog's Facebook page at http://www.facebook.com/SkateGuard would be so very much appreciated. Already 'liking'? Consider sharing this feature for others via social media. It would make all the difference in the blog reaching a wider audience. Have a question or comment regarding anything you have read here or have a suggestion for a topic related to figure skating history you would like to see covered? I'd love to hear from you! Learn the many ways you can reach out at http://skateguard1.blogspot.ca/p/contact.html.
Posted by Skate Guard Blog at May 22, 2017
Email ThisBlogThis!Share to TwitterShare to FacebookShare to Pinterest
Newer Post Older Post Home
"As a rule an author has one or two popular ways of contrasting the past with the present. He can treat the past as lying in comparative doleful ignorance, or he can explain that the past was infinitely superior to the day we live in. Of course, either method is the popular journalism of the moment, and in reality there is no sharp contrast, but a gradual transition which leads the past into the present." - Joel B. Liberman, Skating Club Of New York