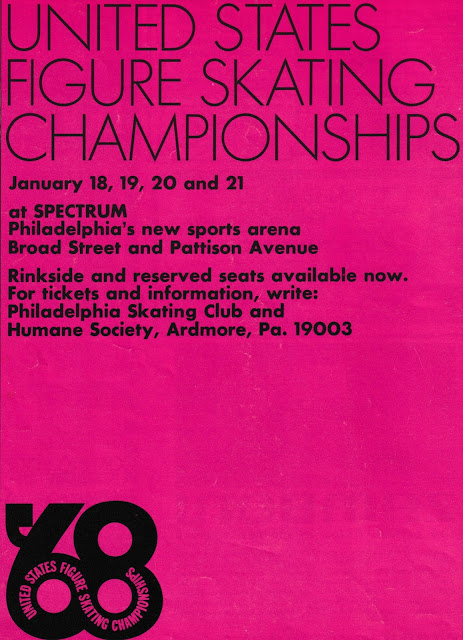 I feel like The Fairy Godmother from Cinderella. I got a request from a reader to write about this competition and POOF - this poof's granting that very wish! Today we'll be setting our time machine for January 17 through 20, 1968 and looking back at that year's U.S. Figure Skating Championships which were held in Philadelphia, Pennsylvania at the (then) newly finished Spectrum Arena. The event, which featured one hundred and thirty eight entries from coast to coast of the States, was enough to make anyone who had been involved in the regrowth process in U.S. figure skating following the 1961 Sabena Crash proud. 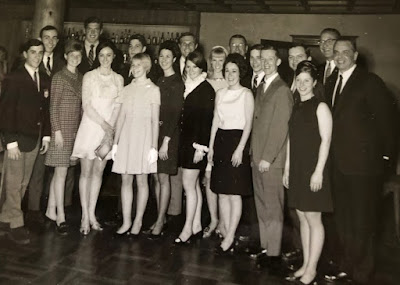 Honorary chairman of the event, former U.S. Champion James Lester Madden, said at the time that "the crop of young talented skaters... here clearly indicates how successful this rebuilding program has been. Once again, the United States is reaching a pinnacle in the uphill struggle to dominate international figure skating events." The last part of his statement was key. As 1968 of course was an Olympic year, not only were spots at the World Championships in Geneva on the line but precious berths on the Grenoble Olympic team were at stake as well.

Let's start by taking a look at some of the names and winners in the novice and junior categories. In the novice ladies event, two fourteen year old's battled it out at the top for the gold, with Peg Naughton of the Long Island Figure Skating Club edging Patti Miller, the leader after the schoool figures. Among the novice men, the winner was Dean Hiltzik of the Metropolitan Figure Skating Club in New York. He vaulted from fifth after the figures to win and the winner in figures, Kim Flynn of Denver, fell to fifth overall after the free skate. Talk about movement in the standings! Barbara Ray of the El Camino Figure Skating Club dominated the junior women's event and the junior men's event was full of names, names, names: Gordon McKellen, Jr., Ken Shelley, Atoy Wilson and John Baldwin among them. Perhaps the biggest story in the novice or junior ranks came in the Silver Dance competition. The January 22, 1968 "Toledo Blade" reported, "Joan Bitterman and Brad Hislop of the Seattle, Washington Skating Club, won the Silver Dance despite an injury suffered during practice, which required 15 stitches inside and 25 stitches outside on his right forearm occurred when another skater doing a jump came down on the Seattle skater's arm. The injury caused Hislop to withdraw from the senior men's competition but he insisted on performing in the Silver Dance in which he and Miss Bitterman finished first in the preliminaries Thursday. Margaret Millier and Donald Bachlott of Wilmington, [Delaware] and Philadelphia, were second in the event." Third of the eleven teams competing were Caren Cady and Warren Danner. 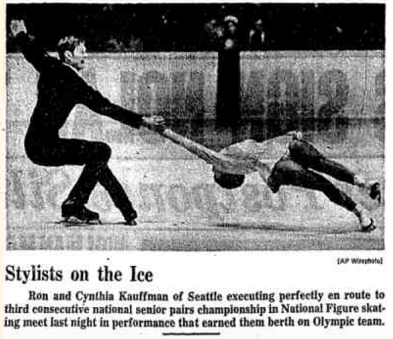 The heavy favourites in the pairs competition were of course Seattle's Cynthia and Ron Kauffman. The two time and defending champions were lucky to even compete. Ron Kauffman was a private in the Army and was given temporary duty in order to allow this even happen. Skating in matching marine blue costumes, the nineteen and twenty one year old siblings easily trounced the competition despite a disastrous final minute in their program, where they slipped on their death spiral and Cynthia missed a camel spin. 1967 bronze medallists Betty Lewis and Richard Gilbert of the Skating Club of Boston were heavily favoured to claim the silver but dropped to fourth behind California's Roy Wagelain and his new partner Sandi Sweitzer and a young JoJo Starbuck and Ken Shelley of the Arctic Blades Skating Club in Paramount. Starbuck and Shelley were both sixteen and just moving up from the junior ranks. Their impressive transition earned them the third spot on the U.S. Olympic team.

Eleven teams competed in Philadelphia for the Gold Dance title. In her book "Figure Skating History: The Evolution Of Dance On Ice", Lynn Copley-Graves noted, "Everyone expected a tight competition in Philadelphia because Lorna Dyer and John Carrell had retired, but from the first compulsory it was apparent that no one could surpass Judy Schwomeyer and James Sladky. They compounded their strength and accuracy in the free dance with an exquisite slow part and novel moves throughout. Ann and Harvey (Skip) Millier moved up from fifth to fourth after the free dance." Silver medallists were Vicki Camper and Eugene Heffron of the Detroit Skating Club and bronze medallists Debbi Gerken and Raymond Tiedemann. Roger Berry of Los Angeles, who had won the silver medal with his partner Alma Davenport the year before and finished ninth at the World Championships one spot behind Schwomeyer and Sladky, took a plunge down to sixth with his new partner Gaie Shoman.


As was absolutely expected, nineteen year old World Champion Peggy Fleming of Colorado Springs took a commanding lead after the six school figures with a score of 76.76 to Tina Noyes' 72.69. Dawn Glab's 71.73 and Janet Lynn's was 71.65. In the January 28, 1968 issue of the "Chicago Tribune" Fleming noted that she was "used to skating on gray ice with more marks. This is light blue and it's difficult to follow the tracings. If you can get by in this situation, you can get by anything." Many thought the ice was in Philadelphia was tinted for aesthetics on the Wide World Of Sports broadcast but officials attested the hue was added to cover hockey lines and make figure tracings more visible to judges. 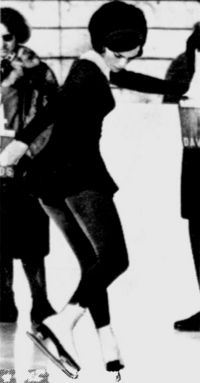 Any challenge Fleming might have had in the figures was forgotten by the time she took the ice for her free skate. In her 2000 book "The Long Program: Skating Toward Life's Victories", she recalled her win thusly: "If there was ever a championship that I was meant to win, it was that National title in Philadelphia in 1968. I couldn't wait to show everyone how much I had worked that past year. For the first time, I wasn't that nervous. My training had gone well, and I had avoided injuries... Everything felt right. I just knew when I stepped onto the ice that I was going to be great. I couldn't wait for the music to start, and when it did, I had a feeling of ease, comfort and flow. The jumps seemed effortless, and the crowd gave me adrenaline that felt like it was physically lifting each jump higher. From beginning to end I remember one thing, one constant in my performance: I am completely enjoying this."

Fleming earned five 5.9's for technical merit and three 5.9's and two perfect 6.0's for composition and style. Many still believe it was the greatest performance of her career. Nineteen year old Noyes of the Skating Club of New York finished a strong second and a fourteen year old from Rockford, Illinois named Janet Lynn captured the attention of America's skating establishment with a performance that belied her years. She earned the fourth spot on the Grenoble Olympic team, edging Glab and Eastern Champion Wendy Lee Jones of the Hershey Figure Skating Club.

From 1964 to 1967, Gary Visconti of the Detroit Figure Skating Club and Scott Ethan Allen from Smoke Rise, New Jersey traded places at the top of the U.S. men's podium. One had two medals at the World Championships, the other an Olympic Bronze. By 1968, Allen was a freshman at Harvard University and Visconti had been given leave from Naval Reserve duties to compete, with twenty one months left to serve. He was stationed at the Grosse Ile Point Michigan Naval Air Station. It was supposed to be a battle royale between these two men but in fact, neither of them won the figures or the free skate in Philadelphia.

In the school figures, Visconti's nineteen year old training mate Tim Wood was victorious with a score of 132,48 to Visconti's 130.29. The 5'10" political science major at John Carroll, coached by Ron Baker, had a decisive lead but the rest of the men were nipping at his heels. A crowd of seven thousand packed the Spectrum Arena for the free skates. That's when a fourth man entered the conversation. John Misha Petkevich, a philosophy student at the College Of Great Falls in Montana was fourth after the school figures. Well behind the leaders with a score of 70.72, the podium seemed a world away but a spectacular performance won him the free skate, a standing ovation and a spot on the 1968 Olympic team. In the January 29, 1968 issue of "Sports Illustrated" magazine, he said of his come from behind medal win: "I was nervous about this thing all day. I had planned to try this triple flip about midway in my routine, see? But then I pulled a muscle in my leg, and I decided I better not go for it. So I gave them everything else I had. And suddenly, about three quarters of the way through, I knew I had them, and I just sort of said, 'Thanks, God, for letting me win,' and went right on skating." Wood took the overall title, with Visconti second. Visconti recalled, "I always give them everything I've got when I'm out there. But that's what this sport is all about. It may sound funny, but this sport is tougher than anything else I can think of. Anyone who says we're not athletes ought to try it one time. It takes strength and coordination, but you know what I'm really trying to do? I'm trying to bring some grace to it. I'm trying to be - well - a boy Peggy Fleming. It's tough." Allen surprised many by dropping down to fourth. His dream of defending the Olympic Bronze he'd won in 1964 in Innsbruck was not meant to be; he earned the third spot on that year's World team instead. 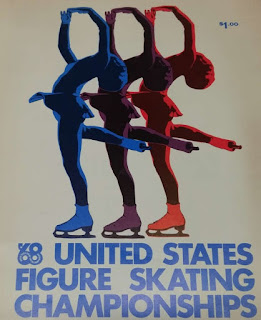 There you have it folks... the 1968 U.S. Figure Skating Championships! One thing's for sure in this case... whoever said history is something best left in dusty library books clearly doesn't hasn't discovered how enthralling skating's history can be.

Skate Guard is a blog dedicated to preserving the rich, colourful and fascinating history of figure skating and archives hundreds of compelling features and interviews in a searchable format for readers worldwide. Though there never has been nor will there be a charge for access to these resources, you taking the time to 'like' on the blog's Facebook page at http://www.facebook.com/SkateGuard would be so very much appreciated. Already 'liking'? Consider sharing this feature for others via social media. It would make all the difference in the blog reaching a wider audience. Have a question or comment regarding anything you have read here or have a suggestion for a topic related to figure skating history you would like to see covered? I'd love to hear from you! Learn the many ways you can reach out at http://skateguard1.blogspot.ca/p/contact.html.
Posted by Skate Guard Blog at May 16, 2017
Email ThisBlogThis!Share to TwitterShare to FacebookShare to Pinterest
Newer Post Older Post Home