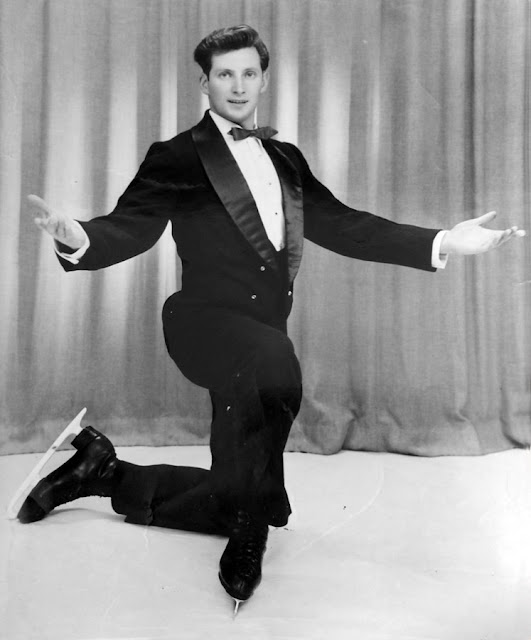 "People overseas are amazed to learn that Australia has ice skaters. They think that ice and sunny Australia don't go together." - Adrian Swan, November 26, 1952, "The Argus"


The son of Sylvia (Lane) and Andrew Swan, Adrian David Swan was born January 15, 1930 in Melbourne, Australia. After serving as a Corporal in the Australian Army's Air Liaison Section during World War II, he returned home and competed as a pairs skater, first with Betty Stringer and later with Gweneth Molony, with whom he won the Australian pairs title in 1950. That October, Gweneth and Adrian gave an exhibition at the opening of Australia's only open-air ice rink at the time, the Tasmanian Glaciarium, performing not only pairs and singles skating but ice dancing as well. According to the October 24, 1950 edition of "The Examiner", they skated "versions of the waltz, foxtrot and tango, as well as novelty items." Shortly thereafter, Adrian gave up pairs skating and left to train as a singles skater in England with Arnold Gerschwiler. He won the British junior men's title in 1951, as skaters from Commonwealth countries were permitted to compete at the time. 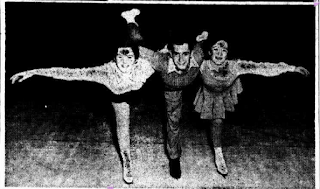 Valda Osborn, Adrian Swan and Ann Robinson
At the 1952 Olympics in Oslo, Norway, Adrian made history as Australia's first men's competitor in figure skating at the Olympics. Only in twelfth place after the school figures, a ninth place in free skating assured him a spot in the top ten. 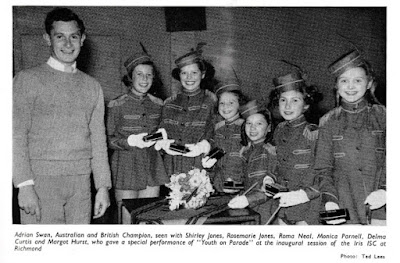 Photo courtesy "Skating World" magazine
Adrian followed that up with a top ten finish at the 1952 World Championships in Paris. In April of that year in London, England, he won both the British junior and senior men's titles, joining three other skaters from Sydney, New South Wales who competed in the event that year. 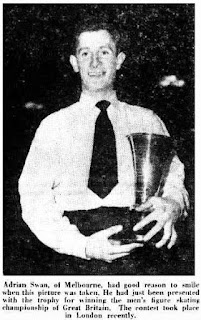 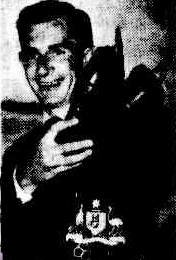 Then the controversy began. On July 16, 1952, the "Sporting Globe" in Melbourne reported, "A first-class Olympic storm is brewing over whether skater Adrian Swan signed a bond. Swan competed for Australia in the Olympic Games... at Oslo last January. At the time there were rumours that he had not signed the bond. These were officially denied by AOF secretary, Mr. Edgar Tanner. He told the chairman, Mr. H.G. Alderson, that every member of the winter sports team had definitely signed. Now Swan already has turned professional and is skating at Earl's Court, London, under contract. He will not say whether or not he signed the bond. Mr. Alderson states that action will taken against Swan if he is proved to have become a professional. In view of the trouble over Russell Mockridge's bond, Olympic officials will have to take a stand over Swan. If there has been any irregularity there are bound to be complaints from the cyclists." 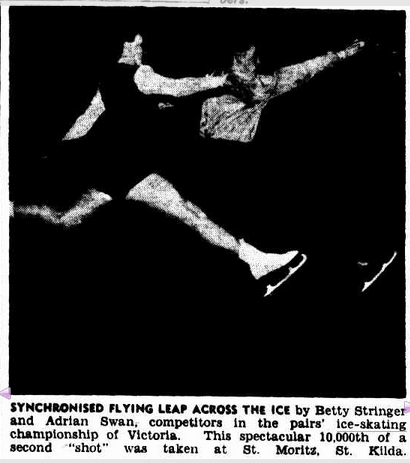 The drama continued for several months at a high octane, with Adrian (residing in England at the time) ultimately leaving the ball in the AOF's court as E.J. Molony, the manager of Australia's skating team at the 1952 Olympics and Edgar Tanner couldn't seem to agree as to whether or not he signed a bond or not. Adrian accepted a retainer while the whole mess got sorted out prior to skating in the Earl's Court show. To explain the 'bond system', the Australian Olympic Federation had a rather ineffective system at the time that required that skaters sign bonds stating that they would remain amateur athletes for two years as a sort of guarantee if they wanted to compete internationally. If Adrian did indeed turn professional after competing in the Olympics, in essence the most they could do was tear it up. That's essentially what happened. 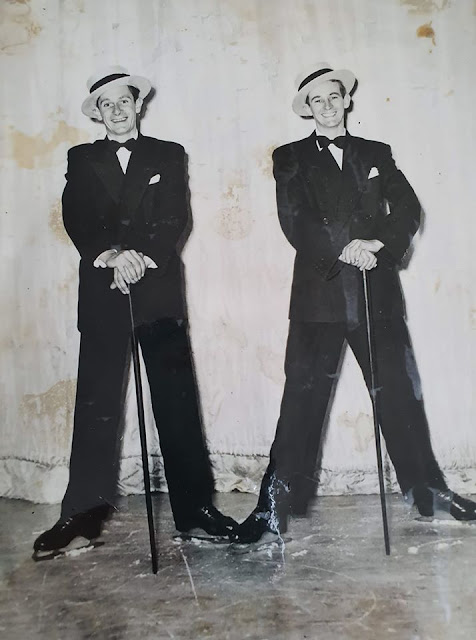 Adrian performed in several ice pantomimes at Earl's Court and Brighton in the fifties, appearing as one half of a shadow skating pair with Errol Lake. In the sixties, he moved to America and coached at the Valley Ice Skating Center in Tarzana, California. He later relocated to Seaford, where he passed away on September 29, 1989... taking the truth about the murky details surrounding his decision to turn professional to the grave with him.

Skate Guard is a blog dedicated to preserving the rich, colourful and fascinating history of figure skating and archives hundreds of compelling features and interviews in a searchable format for readers worldwide. Though there never has been nor will there be a charge for access to these resources, you taking the time to 'like' on the blog's Facebook page at http://www.facebook.com/SkateGuard would be so very much appreciated. Already 'liking'? Consider sharing this feature for others via social media. It would make all the difference in the blog reaching a wider audience. Have a question or comment regarding anything you have read here or have a suggestion for a topic related to figure skating history you would like to see covered? I'd love to hear from you! Learn the many ways you can reach out at http://skateguard1.blogspot.ca/p/contact.html.
Posted by Skate Guard Blog at August 17, 2017
Email ThisBlogThis!Share to TwitterShare to FacebookShare to Pinterest
Newer Post Older Post Home