Last night I had the luck to be present at a grand Court skating match by torchlight. In Paris the streets were muddy; it was supposed a decided thaw had set in, the ice on the lake in the Bois de Boulogne was pronounced unsafe - it was, as I ascertained myself, watery on the surface, and not a soul was to be seen upon it. But beyond the Longechamps racecourse, and on the banks of the Seine near M. de Rothschild's splendid villa, and just opposite Suresne, there is a meadow studded with pretty clumps of high trees which was overflowed during the late floods, and which, although the thermometer had risen to a shade above zero, still presented a smooth coating of solid ice, there being scarcely any water underneath. At this spot the Emperor, with as much secrecy as possible, had made a rendezvous for 10 o'clock at night. The great Golidot, undertaker of public rejoicings, hung the branches of the trees with hundreds of Chinese [lanterns], and serving-men, as numerous as those peasants who erst walked all night long up and down the ponds about the royal palaces to prevent the frogs waking the Kings of France, promenaded the frozen meadow with lanterns fixed on their heads. Besides this constant illumination, there was an intermittent succession of Bengal fire and fizzing torches, which lighted up the scene al giorno. A body of men in white blouses - a special ice police - formed a cordon round the field of operations, and kept off those who were uninvited; but the crowd of spectators, though considerable, consisted mainly of the inhabitants of St. Cloud, Suresne, and the neighbouring villages. The population of Paris knew nothing of the fête, and up to this hour neither the 'Moniteur' nor any other journal has said a word about it. As soon as the Emperor and the Court arrived the sport commenced in very business-like style. The Empress got into a sledge, and M. Hartogs, a German gentleman, whose proficiency as a skater attracted the imperial notice two years ago, and who is now called at Court the Emperor's Aide-de-Camp de glace, had the honour of pushing Her Majesty on the ice. He took her along at railroad speed, and was out of sight of shore in less than a minute. The Emperor then put on his skates, and conducted the sledge of a lady whose name I could not learn. The Countess de Morny, enveloped in velvet and white furs, essayed her prowess, but was supported by two gentlemen, who gave her a hand on each side. The Princess Poniatowski went along very well by herself. In a short space of time the ice was thickly studded with a host of chamberlains, generals, aides-de-camp and even judges, who had come with the Court party to join in the fashionable amusement of the hour. The notion of coming to skate in a thaw was highly approved, for the night was by no means cold. The Emperor and Empress remained on the ice till half-past 11. This afternoon, the frost in the meantime having returned with considerable intensity, the sport was resumed by the imperial party at the same spot. M. Hartogs gave the Empress a promenade in a beautiful sledge, which was sent for by telegraph from Germany, and only arrived this morning. Afterwards Her Majesty ventured to skate, but only with the assistance of two gentlemen. She is not at her ease upon the ice, and considering that she comes from sunny Spain, this is not to be wondered at. The Emperor is a very good skater. He does not attempt any tours de force, but he is perfectly master of his movements. His wont is to go along rather slowly, and he stops frequently to contemplate the animated scene around him. Not the least etiquette is observed on the ice. No clear space is kept about the Emperor or Empress. They go about just like anybody else, and today, unlike last evening, everybody without exception was allowed to skate at the same time with them. The Emperor had nothing whatever but his own adroitness to prevent him from being knocked over by the first tyro in the sport whose skates might run away with him. It was an interesting sight to see the master of so many legions, the mighty potentate upon whose mysterious breath the fate of so many nations hangs, slipping about unpretentiously on the ice, no squire, or even servant following him, and apparently as much on an equality with the people about him as a carter is with a ploughman on an English farmyard pond. Once a young man, who saw the Emperor skating slowly along the middle of the lake, steered almost indiscreetly close to him and gave him the go-by, with the evident intention of getting credit with spectators for being the best skater. The Emperor then, without any apparent effort, increased his speed, gracefully distanced his opponent by a few yards, and contented with his victory, resumed the steady pace which, as I said before, he seems to affect." 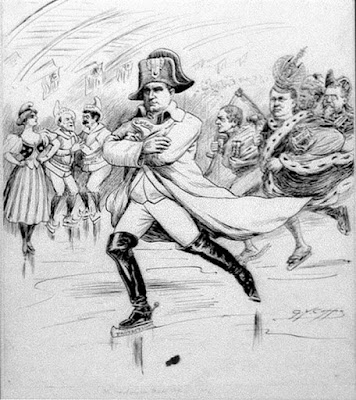 This writer's account seems to ease the notion of the Emperor being beyond reproach on the ice. Although these affairs were indeed exclusive, he was not surrounded by servants and bodyguards; he was out there taking in the pleasures of skating like everyone else. The history books so often fail to capture the simple humanity of political leaders and this tale of the last French Emperor gliding along the ice in competition with an unnamed young man less than ten years before he was captured at the Battle of Sedan reminds us all that the ice has a way of levelling the playing field.

Skate Guard is a blog dedicated to preserving the rich, colourful and fascinating history of figure skating and archives hundreds of compelling features and interviews in a searchable format for readers worldwide. Though there never has been nor will there be a charge for access to these resources, you taking the time to 'like' on the blog's Facebook page at http://www.facebook.com/SkateGuard would be so very much appreciated. Already 'liking'? Consider sharing this feature for others via social media. It would make all the difference in the blog reaching a wider audience. Have a question or comment regarding anything you have read here or have a suggestion for a topic related to figure skating history you would like to see covered? I'd love to hear from you! Learn the many ways you can reach out at http://skateguard1.blogspot.ca/p/contact.html.
Posted by Skate Guard Blog at August 31, 2017
Email ThisBlogThis!Share to TwitterShare to FacebookShare to Pinterest
Newer Post Older Post Home
"As a rule an author has one or two popular ways of contrasting the past with the present. He can treat the past as lying in comparative doleful ignorance, or he can explain that the past was infinitely superior to the day we live in. Of course, either method is the popular journalism of the moment, and in reality there is no sharp contrast, but a gradual transition which leads the past into the present." - Joel B. Liberman, Skating Club Of New York