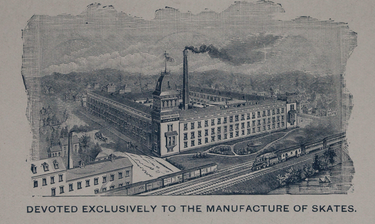 "For one fifth of a century these skates have been before the public. Their durability has been proven by many years of constant use while the various designs, both of form and ornamentation, are of the highest, artistic excellence." - Barney & Berry's Catalogue Of Ice Skates, 1889-1990

I get requests for blogs on the history of skate making quite often and it occurred to me that it's been quite a long time - in fact, going back to the 2015 blog on The Starr Manufacturing Company - since I've devoted a blog to the subject. Today we'll explore a major player in early American skate making history, the ever popular Barney & Berry company. 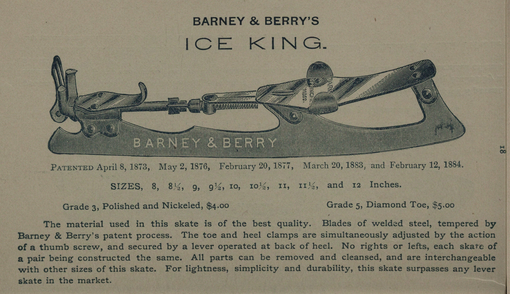 The Barney & Berry company was founded at the old Warner's pistol plant near Springfield, Massachusetts. It was started by Everett Barney, a former supervisor of a small arms manufacturer during the Civil War who spent many a winter on the frozen ponds of nearby Framingham, and his old friend John Berry in 1865. Barney and Barney manufactured five hundred skates in their first year and later moved to Springfield, where they flourished in two locations for over fifty years.

The company was very much a skate making contemporary of the Starr Manufacturing Company and in terms of marketing skates for the masses, they were right up there. Arthur R. Goodfellow's wonderful 1972 book "Wonderful world of skates; seventeen centuries of skating" tells us that "The Barney & Berry company was in business until 1919 when the firm was purchased by the Winchester Repeating Arms Co. of New Haven. At the height of its operation Barney & Berry were turning out 600,000 pairs of skates each year and employing 250 workers." 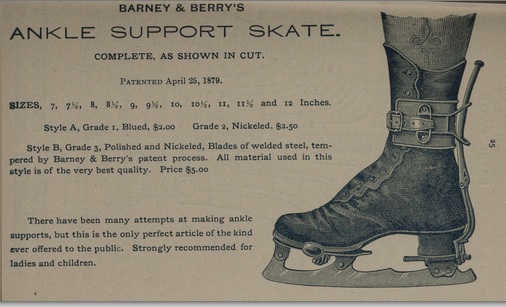 Hold up for a second. The Winchester Repeating Arms Company? You read that right. The same famed gun company started by Oliver Winchester and perhaps best remembered in modern day for the lore surrounding his son's widow Sarah Winchester and The Winchester Mystery House has a long lost skating connection.

The fate of Everett Barney and the reason the Winchester Repeating Arms Company bought out Barney & Berry was really quite depressing. In 1870, John Berry sold his entire interest in the company to Harvey and one of the Hervey Brothers, who coincidentally sold his shares to Barney as well only two years later. Barney was left to manage the company alone, a daunting task especially since he never recovered from the death of his only son, who perished of tuberculosis at the age of twenty six. Both of his marriages failed, and by the turn of the century he began to neglect the business. He was declared insane in 1913, and left his entire estate to the town of Springfield. At the time the Winchester Repeating Arms Company bought Barney and Berry, the firm was in receivership and the plant was in shambles. 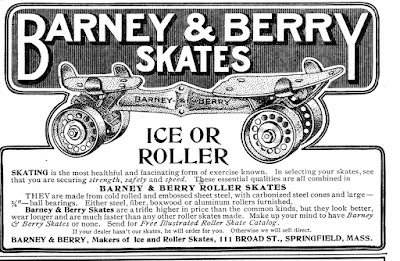 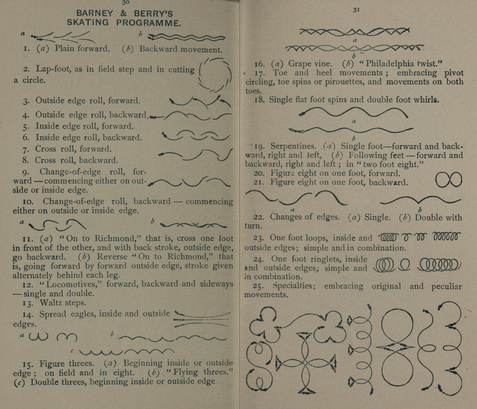 In the June 1968 issue of "Skating" magazine, Richard Stephenson wrote, "Despite its sad ending, the firm of Barney & Berry had a strong influence on the development of figure skating in the United States. It introduced skating to millions of people by providing quality skates at reasonable prices. Barney himself encouraged many of the leading figure skaters of the time, such as George H. Browne, an authority on the history of skating and founder of the 'international style' of skating in the United States. It is conceivable that, had it not been for the death of Barney's son, the firm of Barney & Berry would be producing quality skates today." One has to wonder if perhaps Everett Barney is one of the ghosts that now wanders the twists, turns and stairways that lead nowhere in the Winchester House, haunted by his own ghosts.

Skate Guard is a blog dedicated to preserving the rich, colourful and fascinating history of figure skating and archives hundreds of compelling features and interviews in a searchable format for readers worldwide. Though there never has been nor will there be a charge for access to these resources, you taking the time to 'like' on the blog's Facebook page at http://www.facebook.com/SkateGuard would be so very much appreciated. Already 'liking'? Consider sharing this feature for others via social media. It would make all the difference in the blog reaching a wider audience. Have a question or comment regarding anything you have read here or have a suggestion for a topic related to figure skating history you would like to see covered? I'd love to hear from you! Learn the many ways you can reach out at http://skateguard1.blogspot.ca/p/contact.html.
Posted by Skate Guard Blog at November 16, 2017
Email ThisBlogThis!Share to TwitterShare to FacebookShare to Pinterest
Newer Post Older Post Home
"As a rule an author has one or two popular ways of contrasting the past with the present. He can treat the past as lying in comparative doleful ignorance, or he can explain that the past was infinitely superior to the day we live in. Of course, either method is the popular journalism of the moment, and in reality there is no sharp contrast, but a gradual transition which leads the past into the present." - Joel B. Liberman, Skating Club Of New York