Maribel Vinson, Ulrich Salchow, Madge Syers, Sonja Henie... the stories of many Olympic medallists have become part of figure skating's lore. Their stories have been featured as vignettes in coffee table books and in many cases, developed lives of their own... becoming healthily infused with fiction as they are told and retold over time. While we may all be acquainted many of these early Olympic medallists, there are others whose stories have fallen through the cracks. In today's blog, we will explore the stories of three Olympic medal winning skaters you won't find in the history books! 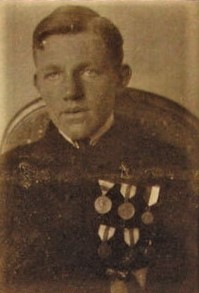 Born April 6, 1904, Georges Harold Roger Gautschi had to grow up at a very early age. His mother passed away when he was only ten and he was shipped off from his native Switzerland to a boarding school in London during World War I. When he returned, he balanced his studies with a secondary education on the ice at the International Skating Club Of Davos. 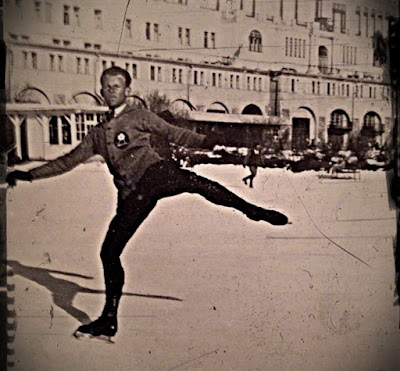 An unheralded skater whose best finish at the European Championships prior to the 1924 Winter Olympics was seventh, Georges cemented a strong third place finish in the school figures on all but one judge's scorecard at the Chamonix Games and held on to claim the bronze medal behind Gillis Grafström and Willy Böckl. In doing so, he became the first Swiss figure skater in history to win an Olympic medal. Although he won a bronze medal at the 1926 European Championships at his home rink, his results were sporadic throughout much of the twenties, largely owing to the time he spent devoting to his business interests rather than his skating. 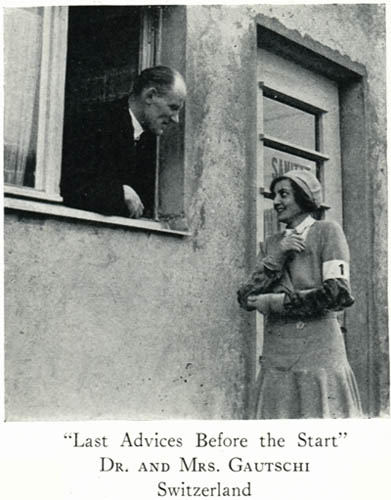 By 1930, Georges was married to Hungarian Champion Edith Hecht and practicing as a lawyer in Davos. He travelled aboard the S.S. St. Louis from Boulogne, France to compete at the 1930 World Championships in New York City, where he won his first and only medal at the World Championships behind Karl Schäfer and Roger Turner. After his return, he wrote a letter which appeared in "Skating" magazine thanking the American hosts for their hospitality: "Your fair conception of sport was a most agreeable surprise, especially because here in Europe we don't find it everywhere. I assure you that my start in New York was my nicest competition. So I never will forget it, nor the kind sympathy I found in America." 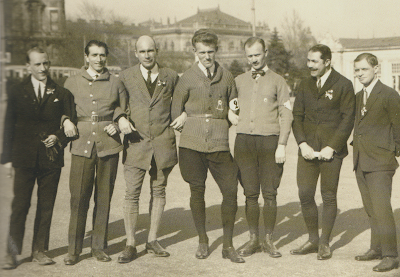 After his return, Georges worked with friends and financiers to help construct Zürich's first artificial outdoor rink and handily won the 1931 Swiss title. He then left the competitive skating world behind. He passed away on February 12, 1985 at the age of eighty one. 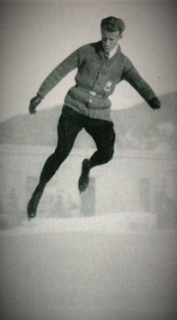 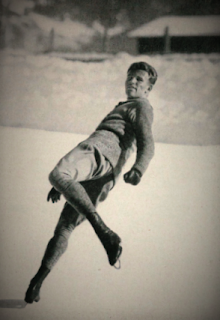 In his 1928 book "Das Eissportbuch", Fritz Reuel shared an anecdote of how the talented Swiss star put a gentleman skating in the English Style in his place: "One day on the Davos rink a young Englishman, proud of his huge figure, in the presence of the then also still quite young contemporary Swiss champions and Olympian Gautschi not very tactfully asked, "Is not our English skating a wonderful sport?" Gautschi replied in his dry Davos style, 'By jove, it is a fine job for stiff old men.' And I thought he hit the nail on the head." 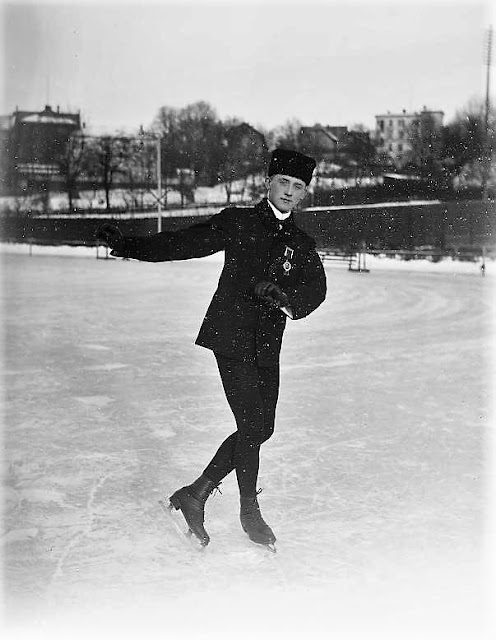 Born July 9, 1894 in Christiania, Norway, Andreas Jens Krogh was the second youngest of Albert and Marie Krogh's ten children. His father was a well-known instrument maker who ran a successful optical business. Andreas learned to skate at Bislett Stadion and in the second decade of the twentieth century was one of the Oslo Skøiteklub's most talented members. At the 1913 European Championships, he placed dead last but the Swedish judge, impressed by what he saw, had him in first place in the free skate. 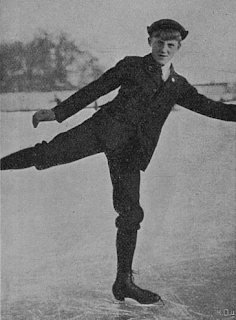 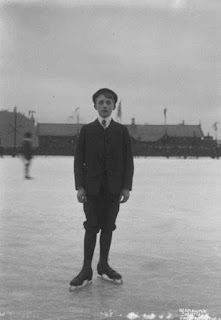 At the 1914 Norwegian Championships in Trondheim, Andreas claimed gold in both the men's competition and the pairs event with partner Astrid Nordsveen. That same year, he defeated none other than two time Olympic Silver Medallist Willy Böckl to earn the silver medal at the European Championships in Vienna. 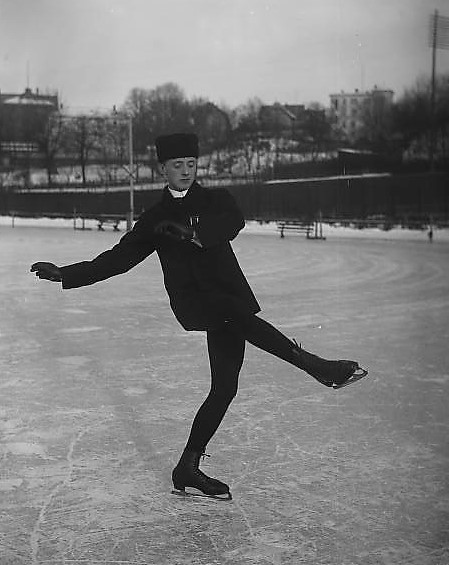 During World War I, Andreas quit skating to manage the family business when his father passed away. At age twenty five, he made a dangerous wartime business trip to America aboard the S.S. Stavangerfjord. 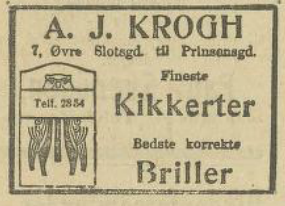 The ice lured Andreas back, and at age twenty five he travelled to Antwerp, Belgium where he won the silver medal at the 1920 Summer Olympics... besting Olympic Gold Medallist Ulrich Salchow in the process. After a fifteen year retirement, he staged an unlikely comeback in 1935 and won his fifth gold medal at the Norwegian Championships at the age of forty. During World War II, Krogh coached skating in Oslo and performed in ice shows for the occupying Nazi forces. He passed away on August 25, 1964 in Oslo at the age of sixty nine and is buried in the Norwegian capital's Oslo Western Civil Cemetery, where his legacy as the only man from his country to win an Olympic silver medal in singles figure skating is all but forgotten. 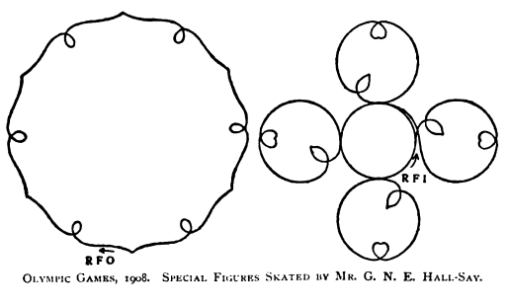 "A friend of mine, who took to skating somewhat late in life, was very diligent in collecting advice from those who were inclined to help him. He summed up his researches by stating that he had numerous useful hints, but that in effect only one was common to all his advisers. Briefly stated, it came to this: 'Don't trouble about what the other fellows are doing; try to skate like me!' The figure-skater is a person of high ideals." - Geoffrey-Hall Say, "The Field", December 12, 1908

Born April 27, 1864 in Bray, Berkshire, Geoffrey Norman Edward 'George' Hall-Say was the son of Sir Richard and Ellen (Evans) Hall-Say. The Hall-Say children spent the first ten years of their lives with over a dozen servants at their beck and call at Oakley Court, a Gothic Victorian country house overlooking the Thames before moving to North London. Sir Richard and Ellen's eldest daughter Mary married the great nephew of novelist Jane Austen, who of course penned "Pride And Prejudice" and "Sense And Sensibility". Geoffrey studied law, passing his final examination in 1887.

It wasn't until Geoffrey was in his thirties that he became a keen enthusiast of the rigid English Style of skating that was the fashion of his era. Most proponents of English Style skating staunchly opposed to idea of badges or tests - let alone competition - so when Geoffrey entered the special figures competition at the Summer Olympic Games in London in Summer 1908, he would have been certainly been going against convention.

A man of "private means", Geoffrey resided for a time with a club steward named Arthur Johnson and his wife Charlotte and was well known as an administrator in boxing circles. He served on England's Council of the Billiards Control Club and was an avid snooker player. He also raced his yacht Camellia at the Royal Ulster Yacht Club. 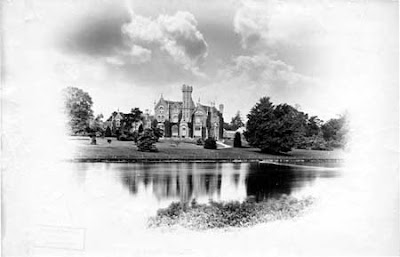 Geoffrey passed away on January 21, 1940 at the age of seventy five in Brighton, a forgotten medallist in the only international figure skating competition he ever entered. You'll definitely remember the manor house he was raised in as a young child though... it was used as Dr. Frank N Furter's Castle in the 1975 cult classic film "The Rocky Horror Picture Show".

Skate Guard is a blog dedicated to preserving the rich, colourful and fascinating history of figure skating and archives hundreds of compelling features and interviews in a searchable format for readers worldwide. Though there never has been nor will there be a charge for access to these resources, you taking the time to 'like' on the blog's Facebook page at http://www.facebook.com/SkateGuard would be so very much appreciated. Already 'liking'? Consider sharing this feature for others via social media. It would make all the difference in the blog reaching a wider audience. Have a question or comment regarding anything you have read here or have a suggestion for a topic related to figure skating history you would like to see covered? I'd love to hear from you! Learn the many ways you can reach out at http://skateguard1.blogspot.ca/p/contact.html.
Posted by Skate Guard Blog at January 26, 2018
Email ThisBlogThis!Share to TwitterShare to FacebookShare to Pinterest
Newer Post Older Post Home