On the island on Honshu to the south of Tokyo was a town located in Higashiyatsushiro District of the Yamanashi Prefecture called Isawa. It no longer exists, now amalgamated as part of city of Fuefuki. However, it was in that town on June 3, 1955 that Minoru Sano, a trailblazer in Japanese figure skating was born. 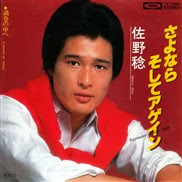 Minoru first took to the ice at the age of four with his brother and sister on Lake Shōji near Mount Fuji and after his first visit to an indoor skating rink while attending elementary school, he attended a specialized training camp for promising young skaters at Nihon University in Tokyo. It was there he started working with Tsuzuki Shoichiro, who would remain his coach for his entire amateur career. Moving his way up the ranks, Minoru won his first senior medal - a bronze - when he was a fifteen at the 1971 Japanese Championships. By the following year in Osaka, he'd moved up a rung on the podium to claim the silver. It was gold in 1973 in Takano, Kyoto. His first senior men's title earned him a trip to the 1973 World Championships in Bratislava, where he finished a forgettable fourteenth.

That fall, Minoru travelled to Calgary, Alberta where he made history (for the first time in his career) by winning Japan's first medal at Skate Canada International, a bronze behind Toller Cranston and Ron Shaver. After repeating as Japan's senior men's champion in Hiroshima in early 1974, he returned to the World Championships, this time in Munich, West Germany. A disappointing eleventh place finish in the school figures left him in a position where he needed to make up ground in the short program and free skate and he did just that, moving up to eighth place from eleventh. That 'coming from behind after figures' scenario would be one that repeated itself time and time again throughout much of the rest of his competitive career, as was the case that fall at Skate Canada in Kitchener, where he climbed all the way from fifth place to take the silver medal behind Ron Shaver, ahead of American Charlie Tickner. Another medal at the Moscow Skate competition in the Soviet Union later in the fall of 1974 established Minoru as a skater to watch. 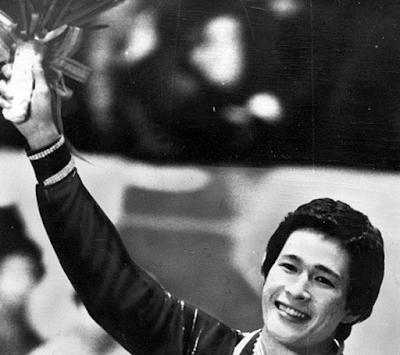 After winning a third Japanese men's title in Shiganawa in early 1975, Minoru headed to the World Championships in Colorado Springs ready to make a move on the top echelon of skaters. Disaster struck when he sprained his foot just days prior to the competition. Although he dropped two places down to tenth place, his gutsy performances earned Japan two men's spots for the 1976 Innsbruck Olympics. However, after the competition what he thought was a sprain turned out to be a fracture. The prospects of Minoru's Olympic dream appeared bleak.


Minoru rallied to win a fourth consecutive Japanese title in Tokyo, earning (alongside Mitsuru Matsumura) one of two men's spots on the Japanese Olympic team heading to Innsbruck. The judges didn't quite know what to do with him, offering scores in the figures that ranged from sixth to eleventh and in the short program that ranged from fourth to tenth. At the end of the day, he finished ninth overall. It was Japan's best result in the figure skating events of those Olympics. In Sweden at the World Championships that followed, he finished seventh overall. However, the March 4, 1976 issue of The Ottawa Citizen noted, "His spectacular high-speed performance [in the short program] included the only successful triple lutz/double toe-loop of [the] competition."


Minoru's final season in the amateur ranks was his most successful. In 1977, he won his fifth consecutive Japanese men's title in Kyoto then headed to the World Championships in Tokyo. Despite the pressures of performing in front of a massive hometown crowd, Minoru actually won the free skate ahead of a who's who of top men's skaters of that era - Jan Hoffmann, Vladimir Kovalev, David Santee and Charlie Tickner among them - with his daringly athletic performance. A sixth place finish in the figures almost kept him off the podium but he managed to win the bronze medal, a historic first medal at the World Championships for Japan. 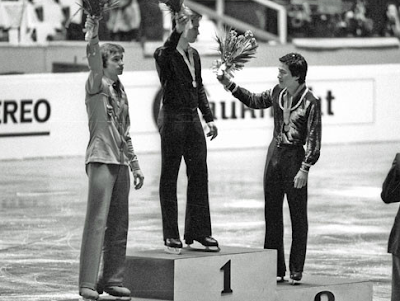 Vlasimir Kovalev, Jan Hoffmann and Minoru Sano on the podium at the 1977 World Championships

Leaving the amateur ranks on a high note, Minoru turned professional and married an Olympic gymnast. He dabbled in music, releasing songs with Toshiba EMI and helped found Japan's first homegrown ice show, Viva! Ice World. In the show, he skated both singles (showing off a newly acquired backflip) and pairs with Emi Watanabi. 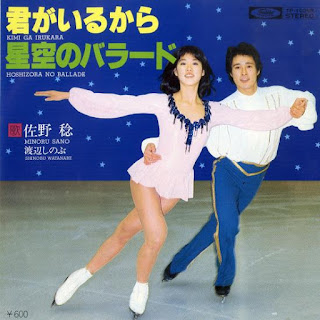 In 1980, he moderated a weekly sports news show on Nippon Television called Exclusive! Sports Information and took a stab at competing in the World Professional Championships in Jaca, Spain. He tied in the judge's scores with American Scott Cramer and lost the title on the audience score by literally one point. Unphased, Minoru continued his skating with Viva! Ice World and work in television on FNN News Report as a sportscaster throughout the eighties. Confusingly - believe me - another Minoru Sano was also an extremely popular Japanese personality during this period. The other Minoru Sano was a celebrity ramen noodle chef.

Minoru continued performing professionally in Japanese skating shows until the early nineties before beginning work as a television commentator for Fuji TV and coach. Among his former students? Shizuka Arakawa, Yamato Tamura and his own daughter Midori, who became a successful professional skater in her own right. He also appeared in the 2009 Japanese skating film "Coach" starring Miwa Nishida, Noburo Kaneko, Yuna Komatsuzaki and Sayaka Yoshino. Other skating greats including Midori Ito, Shizuka Arakawa and Miki Ando made cameos in the film. 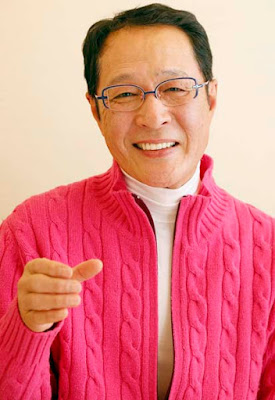 Currently, Minoru coaches alongside Yutaka Higuchi and Miwa Fukuhara at the Meiji Jingu Outer Gardens Skating Rink in Tokyo's Sendagaya district and serves as the President of the Japan Figure Skating Instructor Association. He has also served on the council of the Japan Skating Association. The dedication that Minoru has shown to the sport of figure skating - wearing pretty much every hat there is at one point or another - is remarkable and his skate of a lifetime back in 1977 can't help but make you smile, even to this day. To Minoru Sano, the skating world owes a big "domo arigatou"!

Skate Guard is a blog dedicated to preserving the rich, colourful and fascinating history of figure skating and archives hundreds of compelling features and interviews in a searchable format for readers worldwide. Though there never has been nor will there be a charge for access to these resources, you taking the time to 'like' on the blog's Facebook page at http://www.facebook.com/SkateGuard would be so very much appreciated. Already 'liking'? Consider sharing this feature for others via social media. It would make all the difference in the blog reaching a wider audience. Have a question or comment regarding anything you have read here or have a suggestion for a topic related to figure skating history you would like to see covered? I'd love to hear from you! Learn the many ways you can reach out at http://skateguard1.blogspot.ca/p/contact.html.
Posted by Skate Guard Blog at June 18, 2018
Email ThisBlogThis!Share to TwitterShare to FacebookShare to Pinterest
Newer Post Older Post Home