The Pride Of Stuttgart: The Heiko Fischer Story 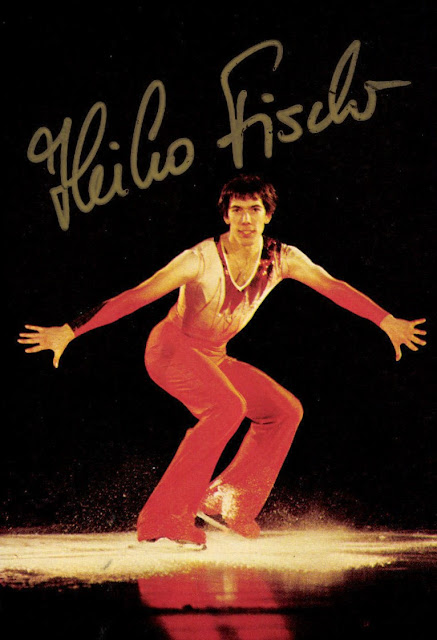 Born February 25, 1960 in Stuttgart, Baden-Württemberg, West Germany, Heiko Fischer was what we in the skating world like to call a 'late bloomer'. Although he started skating at a young age with the support of his mother Helga, Heiko was a studious young man. He passed his Abitur (a designation used for the final exam taken at the end of a German student's secondary education) at the Leibniz-Gymnasium at seventeen and showed great interest in both physics and computer science. However, like many skaters these days around the world, finding the balance between school and skating proved a challenge. Training at both the Waldau rink in Stuttgart and National Training Centre in Oberstdorf under the tutelage of (later disgraced) coach Karel Fajfr, he earned the distinction of sports master of Baden-Württemberg. He divided his time between studying physics - and later, computer science - and made time for skating.

Heiko's interests in physics and computer science reflected in the calculated way he approached skating. In a February 5, 2010 "Stuttgarter Zeitung" article, his mother Helga recalled that his coach "has always said he has a computer brain." Heiko used this 'computer brain' of his to win bronze medals at the West German Championships from 1979 to 1981. He made his first big splashes on the international scene in the fall of 1981 when he managed victories at both the Grand Prix St. Gervais and Nebelhorn Trophy competitions in France and West Germany, a pair of competitions held in conjunction with each other that often featured the same skaters travelling between St. Gervais, France and Oberstdorf, Germany by train to compete in both events back to back. That same season he won his first West German title, beating former champions Rudi Cerne and Norbert Schramm and making it loud and clear that West German men's skating was a three way race. He followed his win up with a sixth place finish at the European Championships in Lyon, France. 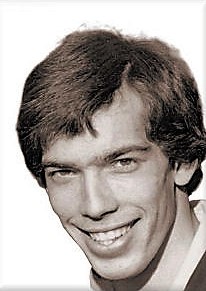 Though consistently dinged by the judges in his artistic impression marks, Heiko did have two very important things going for him: a stable of consistent triple jumps and excellent school figures. Looking at his competitive record, his many wins or top three finishes in international competitions in the figures make for a strong argument that he was moreso a figures specialist than someone who excelled in free skating. He was a tall, slim athlete, who at six foot three and one hundred and sixty five pounds called himself "the tallest international skater in the world". However, his left leg was three quarters of an inch shorter than his right leg and he had to wear lifts in the heels of his skates and shoes to avoid back injury. The October 11, 1982 issue of "The Globe And Mail" explained, "A small girl ran into him and knocked him down, causing him to land on his back. Three weeks later, he fell on his back in practice." In fact, Heiko suffered injuries during much of his career. However, the German magazine "Der Spiegel", dismissive of his history, blamed his "lack of confidence and a lack of assertiveness" for many of his competitive losses. 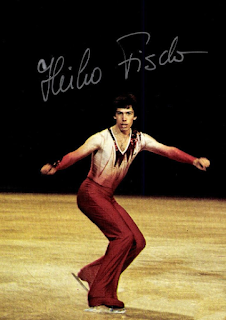 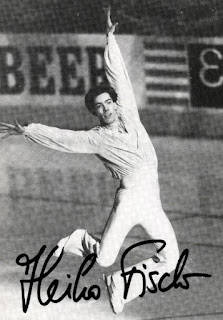 The 1982/1983 season was understandably a challenging year for Heiko but he persevered with determination. At Skate America, he won the silver medal behind Scott Hamilton despite only making it through his full free skate for the first time a week before the event. At Skate Canada in Kitchener, a second place finish in figures allowed him to hang on through the short program and free skate to claim the bronze behind Brian Boitano and Brian Orser. After successfully defending his West German title, he moved up two spots to fourth at the European Championships and nabbed a top ten finish in his first trip to the World Championships. 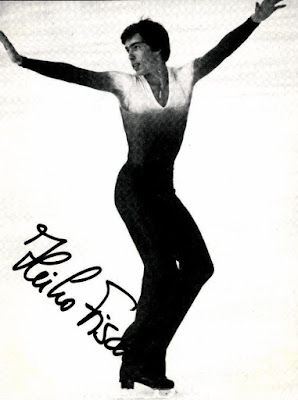 Although Heiko started the 1983/1984 season strongly with wins at the Nebelhorn Trophy in Germany and St. Ivel in England, where on  the basis of his strong figures, he narrowly defeated Gary Beacom, Bobby Beauchamp and East Germany's Falko Kirsten, Heiko lost his West German title in 1984 to Norbert Schramm and dropped from fourth to fifth at the European Championships in Budapest. Although he finished sixth in the figures at the 1984 Winter Olympics in Sarajevo, he dropped to tenth overall in a very deep field. It was at the Sarajevo Olympics that Heiko suffered perhaps one of the embarrassing moments in skating history. In his book "Jumpin' Joe", Jozef Sabovčík recalled, "Dressed in a baby blue unitard, Heiko towered over the other skaters. But what drew our attention was that a seemingly unaware Heiko was sporting an erection that befitted his huge body. I looked up to the one area of the audience that had a clear view and could see them laughing, as were all the other skaters. Frankly, the sight would have been difficult to miss." His embarrassing moment behind him at the World Championships in Ottawa, Heiko was actually third in figures behind Scott Hamilton and teammate Rudi Cerne and ahead of Jozef Sabovčík, Alexandr Fadeev, Brian Boitano and Brian Orser but again dropped in the standings down to seventh. Notice a trend here? 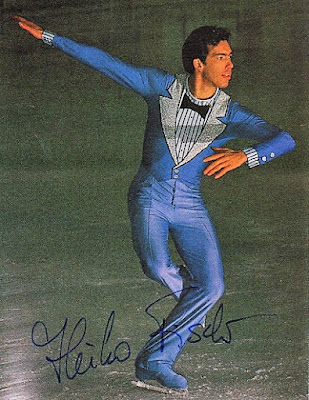 With Norbert Schramm and Rudi Cerne retiring following the 1984 World Championships, the following season had every potential to Heiko's best yet and he didn't disappoint. Reclaiming his West German title, he moved back up to fourth at the European Championships and earned the best finish of his career at the World Championships in Tokyo, finishing sixth - ironically solely on the basis of his free skating as opposed to his figures.

The following season started strongly for Heiko with a win at the Golden Spin Of Zagreb and another West German title, however his chronic back injury forced him to withdraw from the European Championships. Although he did manage a seventh place finish at the World Championships in Geneva (this time once again based on a top three finish in the figures) the severity of his chronic back injuries caused him to seriously contemplate retirement. After finishing a disappointing fifth at Skate America that autumn, he missed the rest of the 1986/1987 season with a hernia and a pulled groin muscle on top of his pre-existing back problems. 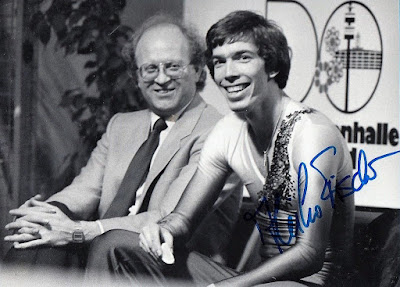 The thought of Heiko mounting a comeback in time for the 1987/1988 Olympic season seemed unlikely at best but he pulled a rabbit out of his hat, which is no surprise considering he had a reputation off the ice as a prankster. His comeback was no joke; he even took lessons from his former competitor Jozef Sabovčík,

After finishing second behind Petr Barna at Czech Skate, Heiko tied with Paul Wylie for first after figures and short program at St. Ivel in England, but dropped to third behind Wylie and Kurt Browning in the final standings. He returned to win his fifth and final West German title before heading to the European Championships in Prague and placing sixth. Determined to make a go of a second 'once in a lifetime' trip to the Olympics in Calgary, Heiko scrapped both of the programs he skated at the European Championships. He started fresh with new music and choreography for his short program and brought back and reworked his 1985 and 1986 "West Side Story" free skate.

In Calgary, Alexandr Fadeev and Brian Boitano were first and second in all three figures but Heiko managed to place third on the first figure ahead of Brian Orser. A rusty performance on his final figure, the loop, left him in fourth overall. Quoted the February 19, 1988 issue of "The Globe And Mail", he said, "I don't know what happened. My first two figures were really good, but the last was a real mess. I just couldn't do it. It was perfect in warmup. Usually the loop is my best figure." He was proud of his finish though, remarking that "the judges know the old man can still do figures." The oldest of the men's competitors in Calgary at twenty eight, he predicted in the "Toronto Star" that Orser - not Boitano - would win the gold: "He's the strongest free skater and if he's consistent enough, he'll win. Boitano is excellent too, very consistent because he never misses anything. But if Orser is at his best, he'll win." Heiko wasn't correct in his prediction, but he gave two of the best performances of his career in Calgary despite dropping to ninth overall.

Heiko's final competition, the 1988 World Championships in Budapest, saw him drop from fourth to Orser's fifth in figures down to seventh overall. However, he pulled up his socks and managed to give some of the best performances of his career when the chips were down. 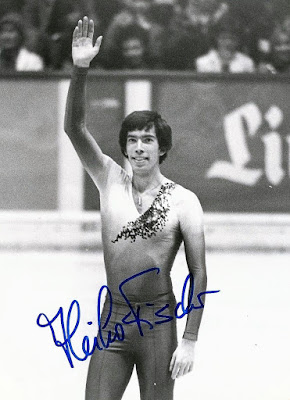 Retiring from amateur competition following the 1988 World Championships, Heiko married and continued his studies in computer science while coaching young skaters on the side. On November 21, 1989, he collapsed during a game of squash with friends. He was taken to Sindelfingen Hospital, where he was pronounced dead. It was revealed that he suffered from chronic myocarditis.

Heiko's death came a huge shock to everyone close to him, as he was a very active person who spent what little free time he had off the ice playing tennis and squash. Family, friends and fellow skaters were devastated; he was a friend to even his closest rivals. His mother Helga stated, "He enjoyed his life whenever [there was time.] Heiko was a very happy person." So beloved was Heiko as a sportsperson in Stuttgart that when police had blocked off the Neuen Friedhof Degerloch cemetery after his death, people sat on the road and cried.
Horst Klehr, a pharmacist who was responsible for creating one of the first lists of banned substances specific to sport, referenced Heiko in a 2009 speech about athletes involved in doping. He said, "Many fatalities could still be alive today if the officials in the West had not closed their eyes."

When Heiko died, his wife was seven months pregnant. Because he had gone the education route when he had no substantial offers to skate professionally, he left his wife almost penniless. She was forced to survive on an insurance payout and financial support from Sports Aid and the Federal State of Baden-Württemberg. In 1990, a charity gala was organized to raise funds for Heiko's widow. Among the performers was two time Olympic Gold Medallist Katarina Witt. The following year, an international competition was established in his memory called the Heiko-Fischer Pokal. Among its past winners? Carolina Kostner, Stefan Lindemann, Alban Preaubert, Valentina Marchei, Peter Liebers, Eva-Maria Fitze, Sarah Hecken and the late Sven Meyer.
Skate Guard is a blog dedicated to preserving the rich, colourful and fascinating history of figure skating and archives hundreds of compelling features and interviews in a searchable format for readers worldwide. Though there never has been nor will there be a charge for access to these resources, you taking the time to 'like' on the blog's Facebook page at http://www.facebook.com/SkateGuard would be so very much appreciated. Already 'liking'? Consider sharing this feature for others via social media. It would make all the difference in the blog reaching a wider audience. Have a question or comment regarding anything you have read here or have a suggestion for a topic related to figure skating history you would like to see covered? I'd love to hear from you! Learn the many ways you can reach out at http://skateguard1.blogspot.ca/p/contact.html.
Posted by Skate Guard Blog at August 02, 2018
Email ThisBlogThis!Share to TwitterShare to FacebookShare to Pinterest
Newer Post Older Post Home