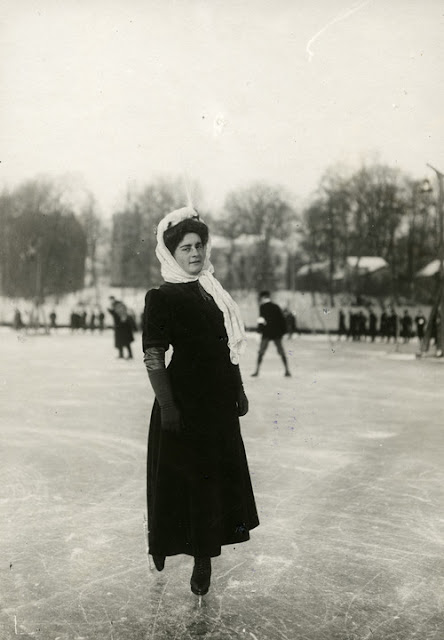 At times, life may have been anything but a cabaret for Germany's Elsa Rendschmidt, but somehow she made it through, making history more than once along the way. Elsa was born January 11, 1886, grew up in Berlin, Germany and learned to skate at the Berliner Schlittschuhclub alongside her talented brother Max. A contemporary and rival of Madge Syers in the early days of women competing at the World Figure Skating Championships, it's safe to say that in what was very much an 'old boys club', Elsa was a respected pioneer of women's figure skating in her own country. She trained alongside Werner Rittberger, the inventor of the loop jump. In a 2010 interview with HNA, her grandson Ulrich Sander recalled her as "a scary self confident woman" and it would have been that sense of determination that resulted in her breaking many gender barriers along the way and even winning prizes from the Russian Czar and Swedish royal family. 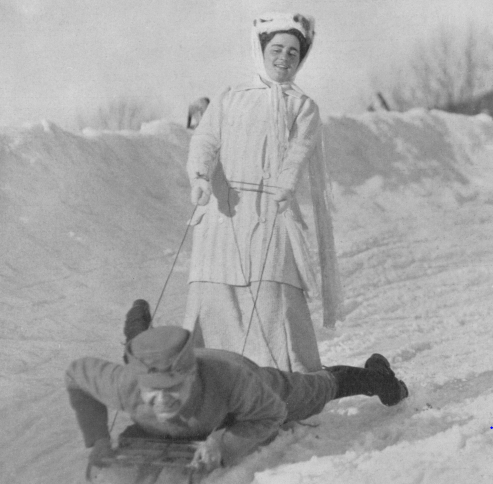 Elsa Rendschmidt posing with a skeleton racer in Schierke in 1911

At the first World Championships for women in Davos, Switzerland, Elsa finished fourth behind Syers and Jenny Herz of Austria, a Viennese student of Leopold Frey who represented Cottage Eislauf-Verein, and well-to-do Hungarian Lili Kronberger. Her participation marked the first appearance of a woman from Germany in a major international skating competition. She repeated that fourth place result in Vienna the following year at a competition (according to Madge Syers) "long remembered by those who took part in it owing to the suffering entailed on them by the intense cold which, accentuated by a bitter wind, was almost unbearable. Several times the benumbed skaters were forced to retire and restore the circulation to their hands and feet, and many of the competitors and judges were subsequently hors de combat as the result of this trying experience." Despite missing the podium on her first two tries, the unflappable Elsa soldiered on.

Elsa's persistence was rewarded the following January when at age twenty two, she claimed the silver medal at the World Championships in Troppau behind Lili Kronberger. Her good fortune continued when on October 29, 1908 in London, she became the first German woman to win a medal at the Summer Olympic Games... in any sport. Commentary from "The Fourth Olympiad, the Official Report Of The Olympic Games 1908" by Theodore Andrea Cook noted that Elsa performed all six of her school figures quite well, with the exception of the third, the change loop, where she "missed several of the loops". She backed up her second place finish in the school figures with a second place free skate to win the silver. Cook expressed that "Fräulein Rendschmidt's skating was distinguished by a most engaging gaiety. She seemed quite at home on the ice, and danced through her programme in the happiest possible manner." 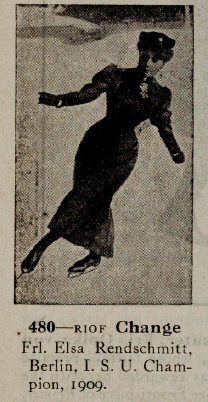 Elsa didn't challenge Lili Kronberger for the World title in 1909. Instead, she opted to participate in a separate senior women's competition at the same event, in which she finished second to Vienna's Jenny Herz. We can only speculate as to why Elsa made this decision, but it may have had something to do with the fact was Kronberger was competing at her home rink. However, that same winter Elsa won the Championships Of Berlin and the Nordic Games, defeating Zsófia Méray-Horváth and Elna Montgomery in the latter. The following February when the World Championships for women were held in her home city, she again won the silver behind Kronberger and in 1911, she made history in her final competition by becoming Germany's first women's champion in Olmütz. 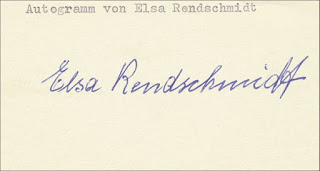 Retiring from competition, Elsa headed to Switzerland and became a skating instructor in both St. Moritz and Davos. It was there she met her husband Siegfield 'Fritz' Sander, who ran his family's business in Hannover. In 1913, Elsa and Fritz married and three years later, they had their only child, son Günter, during the Great War. They divorced in 1929. Elsa joined the Nazi Party in 1932 and found work as a librarian. When the Olympics were held in Garmisch-Partenkirchen in 1936, she was seated at a table with Adolf Hitler himself. 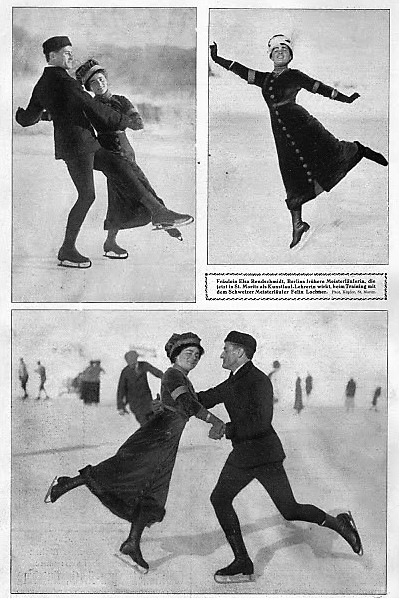 Elsa Rendschmidt skating with Felix Lochner in St. Moritz in 1912

Records graciously provided by Horst Seferens at the Stiftung Brandenburgische Gedenkstätten in Oranienburg, Germany indicate that Elsa's Jewish ex-husband Fritz was first detained in the Sachsenhausen concentration camp in Oranienburg on April 12, 1941 for being a 'race-mixer'. He never saw Elsa or his son again, dying in the concentration camp's infirmary on August 6, 1941 from an embolism caused by decompensated heart failure as a result of pneumonia. His death is recorded both in the memorial book of the German Federal Archive and "The Book Of The Dead" of the Sachsenhausen Concentration Camp 1936-1945. He was prisoner number "37384".

After the War, Elsa moved to the small German village of Volpriehausen (now incorporated in the city of Uslar) and only spoke about her skating career, even to family, when pushed. She lived out her days in that small resort village before moving into a nursing home in Celle, Niedersachsen, Germany in 1969 and passing away October 9 of that year. 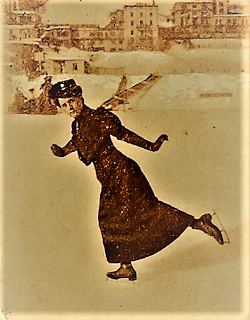 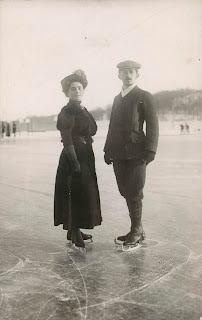 Despite her pioneering accomplishments, despite her noted "scary self confidence", despite the fact that she "danced through her programme in the happiest possible manner", Elsa, the first great German queen of the ice, distanced herself from skating entirely.

Skate Guard is a blog dedicated to preserving the rich, colourful and fascinating history of figure skating and archives hundreds of compelling features and interviews in a searchable format for readers worldwide. Though there never has been nor will there be a charge for access to these resources, you taking the time to 'like' on the blog's Facebook page at http://www.facebook.com/SkateGuard would be so very much appreciated. Already 'liking'? Consider sharing this feature for others via social media. It would make all the difference in the blog reaching a wider audience. Have a question or comment regarding anything you have read here or have a suggestion for a topic related to figure skating history you would like to see covered? I'd love to hear from you! Learn the many ways you can reach out at http://skateguard1.blogspot.ca/p/contact.html.
Posted by Skate Guard Blog at September 13, 2018
Email ThisBlogThis!Share to TwitterShare to FacebookShare to Pinterest
Newer Post Older Post Home
"As a rule an author has one or two popular ways of contrasting the past with the present. He can treat the past as lying in comparative doleful ignorance, or he can explain that the past was infinitely superior to the day we live in. Of course, either method is the popular journalism of the moment, and in reality there is no sharp contrast, but a gradual transition which leads the past into the present." - Joel B. Liberman, Skating Club Of New York