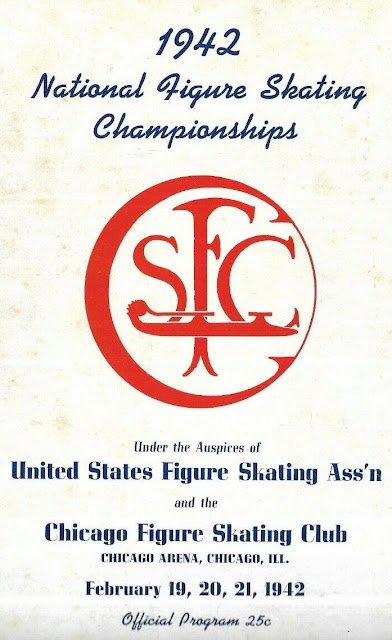 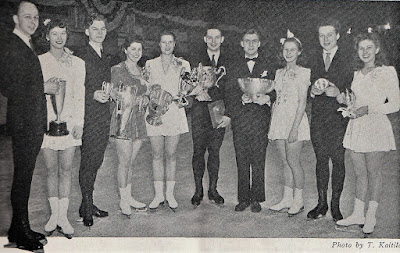 Al Richards and Edith Whetstone, Walter Noffke and Doris Schubach, Jane Vaughn Sullivan, Walter Sahlin, Bobby Specht, Dorothy Goos, Dick More and Mabel MacPherson at the 1942 U.S. Championships. Photo courtesy "Skating" magazine.
It had only been just over two months since the attack on Pearl Harbor, which forced the United States to enter World War II and though the effects of the War impacted every skater who participated, on the opening day of the 1942 U.S. Figure Skating Championships in Chicago, Illinois, everyone chose to put their fears on the back burner for three days and worry only about skating. 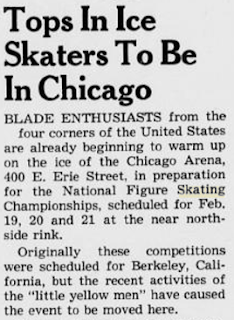 Racist clipping promoting the event from the February 20, 1942 issue of "The Decaturian"

Considering the safety of skaters and officials, the USFSA had decided to move the event, initially slated for the St. Moritz Ice Skating Club in California, inland to Chicago. Despite this, many parents refused to allow their children to travel west due to wartime conditions. Large gatherings such as sporting events were seen as potential targets for bombing, and the organizers weren't taking any risks. To contribute to the War effort, clubs were organizing blood drives and sending in old medals and trophies to be melted down. 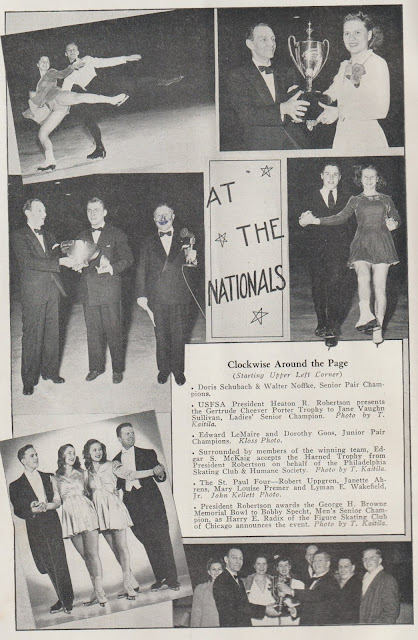 Event chairman Harry E. Radix and members of The Chicago Figure Skating Club, which had hosted the Midwestern Championships only five weeks prior, worked around the clock to ensure the competition ran smoothly. Committees organized everything from decorations and schedules to serving the judges hot coffee.


The event's program, recalled Lynn Copley-Graves in her book "Figure Skating History: The Evolution Of Dance On Ice", featured "a message from the Division of Physical Fitness of the Office of Civilian Defense reminding spectators that skating furnishes the opportunity for physical conditioning and recreation at their best, 'so Skate and Get Fit to Win' for the tremendous war task which lies before us.'" 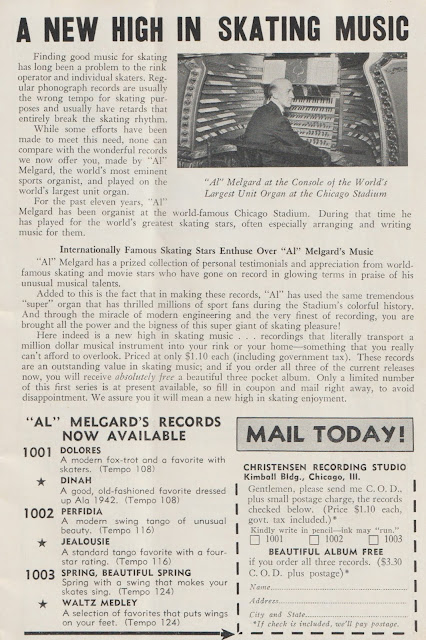 The competition was judged using a new Modified Open System, with marks on a scale from zero to 10.0. As a band was unable to be arranged, skaters were accompanied by records or Al Melgard's massive unit organ. Entries dropped from one hundred in 1941 to eighty six. This was due to several reasons - the fact Californians opted not to travel east, women engaging in War work and men starting to enlist. In contrast, ticket sales skyrocketed. A portion of the proceeds from ticket sales was donated to the Margaret Etter Crèche Day Nursery and the crowd of three thousand, seven hundred was a new record at the U.S. Championships. Many spectators likely just wanted something to cheer about those gloomy times. What happened on the ice that February in Chicago, you ask? Let's find out!

In a four-one split, the judges award first place in the novice men's event to Dick More of Buffalo. Oakland, California's Marcus Nelson took the silver; St. Paul, Minnesota's Jimmy Lawrence the bronze. More was a seventeen year old who had just been accepted to Harvard. The previous year, he had won the Eastern junior men's title on his first try. He had only been skating for four years. Like More, eighteen year old Mabel MacPherson took up skating 'late', at the Philadelphia Skating Club and Humane Society. On the strength of her fine school figures, she unanimously won the novice women's title, besting thirteen other young women. Margaret Field, who would go on to star in the Ice Cycles with Jimmy Lawrence, was fourth.

Nineteen year old Wally Sahlin of Minneapolis had won the U.S. novice men's title the year prior in Cleveland. In Chicago, he dazzled with an athletic free skate that included a double loop and double Salchow. He was the only junior or novice man to succeed in landing both jumps. His technical prowess allowed him to move up from his dismal showing in figures and claim the junior men's title and Irving Brokaw Trophy. Three judges had him first, while silver and bronze medallists Eddie LeMaire and Robert Premer both received support from one judge each. Arthur Preusch Jr., the winner of the figures, placed fourth. 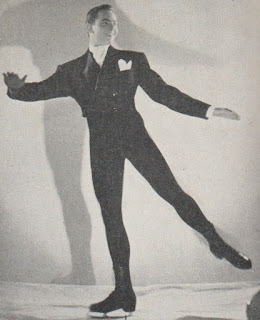 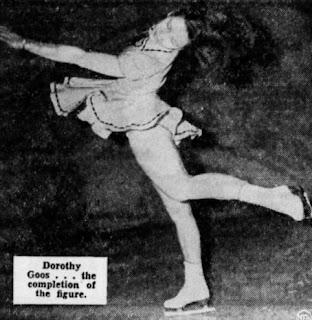 Dorothy Goos made quite the impression on the Chicago crowd, perhaps even moreso than any of the senior champions. The thirteen year old was the daughter of an apartment building superintendent from the Bronx and was coached by Willy Böckl in New York City in the winters and Gustave Lussi in Lake Placid in the summers. She had been competing for several years already and had just completed her sweep of the Eastern novice, junior and senior titles in successive years. Goos won both the junior women's and pairs events, skating in the latter with Eddie LeMaire, the son of two famous show skaters. Her winning free skate in the junior women's event earned her the highest marks in any class in Chicago - a pair of 9.8's. She tackled risky elements few of the senior women dared to attempt - a double flip, double loop, double Salchow and flying sit spin.

None of the medal-winning pairs from the 1941 U.S. Championships returned. Donna Atwood and Eugene Turner had turned professional, Jack Might had formed a new partnership with Margaret Field and Bobby Specht was focusing on singles. A situation like this had never happened previously in senior pairs at Nationals, making the emergence of a delightful pair like Doris Schubach and Walter Noffke of Holyoke, Massachusetts an even more pleasant surprise. They were unanimous winners over Janette Ahrens and Robert Uppgren and Margaret Field and Jack Might. Off the ice, Walter worked at the Holyoke Savings Bank and enjoyed swimming and tennis. Doris was fond of golf.

Skating unopposed, the St. Paul Four of Lyman Wakefield Jr., Robert Uppgren, Mary Louise Premer and Janette Ahrens reclaimed the title they first won in 1940. Wakefield, the 'leader' of the four, was shortly after called to active duty in the Navy. Uppgren was a freshman at Macalaster College in St. Paul. Ahrens, who was Uppgren's partner, was a sophomore in High School. Premer, who of course went on to a decorated international judging career, was then studying medical technology at the University Of Minnesota.

Edith Whetstone and Al Richards of the Philadelphia Skating Club and Humane Society were victorious in the dance event, pulling off the only upset of the entire competition. Coached by Nancy Follett, they defeated Sandy Macdonald and Harold Hartshorne, who had won the title the previous three years. Hartshorne had actually won five in a row. His partner in 1937 and 1938 was Nettie Prantell. Whetstone and Richards had only been skating together for two years and shortly after their victory, Richards was ordered to active duty in the U.S. Naval Reserve.

Much had changed in the life of the defending U.S. Champion in women's figure skating in the year since Jane Vaugn won her first title in 1941. She was now Jane Vaughn Sullivan, the wife of a Lieutenant in the U.S. Army Air Corps, living at West Point where her husband was an instructor. Her training time had been so reduced since she'd got married that Benjamin T. Wright remarked that she was "living proof that one can be a champion with what might be called 'week-end skating'." She told an Associated Press reporter, "West Point cadets have an excellent ice hockey rink. I was able to use it regularly and because I could continue my practice, I decided to defend my title in Chicago rather than give up the sport." She received some last minute instruction from coach Gustave Lussi while visiting her parents prior to the competition. 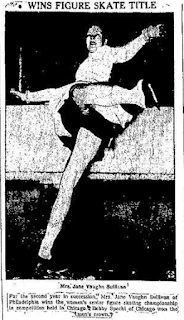 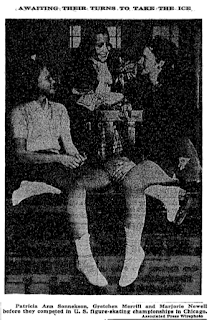 In the school figures, New York's Phebe Tucker bested Gretchen Van Zandt Merrill, Ramona Allen and Jane Vaughn Sullivan, but the results were so incredibly close that any one of the four could have easily won the title had they won the free skate. First to skate in the free, Vaughn Sullivan skated elegantly to earn the highest marks in free skating and first place ordinals overall from four of the five judges. Merrill took the silver; Tucker the bronze.

Eugene Turner was beginning his professional career and Robin Lee and Ollie Haupt Jr. - familiar faces from the not-so-distant past of U.S. men's skating - had already joined the military. Twenty year old Bobby Specht, who hailed from Wisconsin but trained in Chicago, surprised many by taking the lead, winning eight of the eleven senior men's figures. He received a remarkably high score of 9.2 from one judge for the bracket-change-bracket. 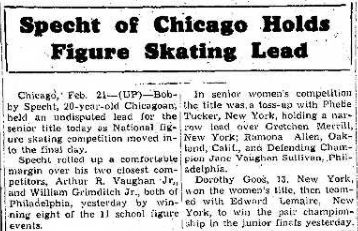 Specht's strength was free skating, so his win in the first phase of the competition made his bid to be U.S. Champion a tad easier. Though his free skating program wasn't as difficult as his competitors - William Grimditch and Arthur Vaughn Jr. - the judges preferred his style and gave him a unanimous and well-deserved victory. Less than a year later, while appearing with the Ice Capades, Specht was drafted to serve in the U.S. Army Air Corps.

Skate Guard is a blog dedicated to preserving the rich, colourful and fascinating history of figure skating and archives hundreds of compelling features and interviews in a searchable format for readers worldwide. Though there never has been nor will there be a charge for access to these resources, you taking the time to 'like' the blog's Facebook page at http://www.facebook.com/SkateGuard would be so very much appreciated. Already 'liking'? Consider sharing this feature for others via social media. It would make all the difference in the blog reaching a wider audience. Have a question or comment regarding anything you have read here? Have a suggestion for a topic related to figure skating history you would like to see covered? I'd love to hear from you! Learn the many ways you can reach out at http://skateguard1.blogspot.ca/p/contact.html.
Posted by Skate Guard Blog at January 21, 2020
Email ThisBlogThis!Share to TwitterShare to FacebookShare to Pinterest
Newer Post Older Post Home
"As a rule an author has one or two popular ways of contrasting the past with the present. He can treat the past as lying in comparative doleful ignorance, or he can explain that the past was infinitely superior to the day we live in. Of course, either method is the popular journalism of the moment, and in reality there is no sharp contrast, but a gradual transition which leads the past into the present." - Joel B. Liberman, Skating Club Of New York