A Jumble Of Judging Tales 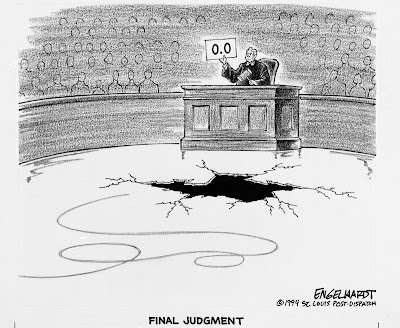 "If I were asked for statistics I think I could say that out of ten judges, four are incompetent, three are 'consciously' dishonest, and three are good judges." - Jacqueline du Bief

From the all Norwegian panel that handed Sonja Henie her first World title to the 2002 Salt Lake City scandal, figure skating history is peppered with stories of judges run amuck. While the majority of judges are honest, extremely dedicated volunteers, there's no denying that there have been many bad apples in the bunch over the years. Hell, in her autobiography "Thin Ice", World Champion Jacqueline du Bief even claimed she overheard one judge remark, "I would willingly give her two-tenths for a kiss." Wow! From the controversial to the charming, today we'll take a look back at 6.0 lesser known anecdotes about judges from the annals of figure skating history.

As World War II raged overseas in 1941, the Philadelphia Skating Club and Humane Society hosted the North American Figure Skating Championships for the very first time. Mary Rose Thacker, Eleanor O'Meara and Norah McCarthy made history with the first clean sweep of the women's podium since the event's inception. 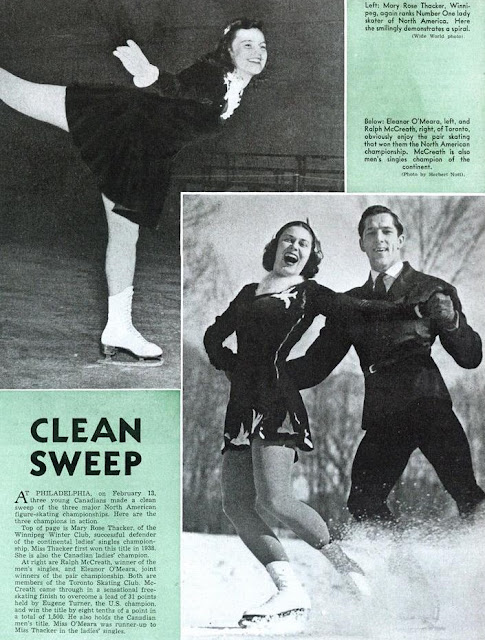 It was a great moment that was eclipsed by a lot of hullabaloo in the men's event surrounding the problematic nature of nationalistic judging in a competition between two countries. In his 1955 book "Dick Button On Skates", two time Olympic Gold Medallist Dick Button recalled the fiasco: "In the men's event, Ralph McCreath of Canada competed against Eugene Turner of the United States. Out of the six judges, three were American and three Canadian... The three Canadians voted ﬁrst places to the Canadian McCreath and the three American judges voted ﬁrst to the American Turner. Each judge placed the skater from the other country second, thereby giving both of the skaters a total of nine ordinals. Whenever a tie is reached in ordinals, the point totals are resorted to in deciding the winner. In this case, since the Canadian had a total of 1575.8 points to the American's total of 1575.0 points, he won; with an exact split on ﬁrst and second places down the judging line, the decision was decided on the fact that the Canadian judges had marked the American slightly lower in second place than the Americans had marked the Canadian skater in second place!" Button's example outlined in black and white the kind of recurring controversial judging that ultimately led to the downfall of this competition some three decades later.

ISU historian Benjamin T. Wright remembered, "I attended that North Americans also, as I was assigned by Tee Blanchard, the editor of 'Skating', to interview and write a column called 'Meet the Champions' for the magazine. That was the first time that I met my future wife (then age seventeen), whom I married in 1953 after the War. I was a young (unpaid) volunteer on the magazine at that time and a freshman in college... It was probably the closet competition ever in that championship. McCreath won, Turner was second and third was the US Junior champion of that year, William Grimditch, who was a better free skater than both Ralph and Gene."

Jacqueline du Bief finished a forgettable sixteenth at her first Olympics in St. Moritz, Switzerland in 1948. She fondly recalled the dedication of the judges who ensured ice conditions were favourable for the school figures: "When we arrived at 7 a.m. it was still dark and I shall always remember the two nice judges who, their eyes heavy with sleep, tried to examine the state of the ice by the light of a candle. The wind blew softly and felt almost warm and the drip, drip of water falling from the roofs told only too clearly of the thaw."

Disenfranchised by their lack of input on everything from assignments to training and a lack of representation on CFSA boards, by the late eighties Canadian figure skating judges were fed up. Several prominent competitive skaters turned judges, including Norris Bowden and Suzanne Morrow-Francis, were involved in the push to organize a separate Judges' Federation, very similar to the controversial Professional Skating Association of Canada/Figure Skating Coaches of Canada organization which sparred with the CFSA for decades. In Teresa Moore's book "Reflections On The CFSA: A History Of The Canadian Figure Skating Association 1887-1990", judge Jane Garden explained, "There was a real push for this in 1988. Most judges [had] been involved in skating programs longer than the elected officials and [could have provided] continuity and overall perspective." The situation escalated and David Dore was tasked with the job of writing a report that summarized the judge's concerns and suggested solutions. The CFSA board approved it, but the judging community hated it. Though the Judges' Federation died with Norris Bowden in 1991, resentments brewed for several years until the CFSA started making an effort to include judges on committees that made decisions that affected them.

In an interview in "Weekend Magazine", Canadian judge Hugh Glynn recalled the first time he ever judged World Champion Petra Burka thusly: "It was in 1965 [at Canadians] and as you know, in free skating the skater is judged both for technical merit and artistic impression. Well, I was so awe-struck after seeing her that I forgot all about the score. They stood in front of me, waiting, and finally they had to say, 'Your slip, please... may we please have your score?' I snapped out of it and stuck up 5.9 and 5.9 because it was the nearest thing to perfection that I had ever seen." 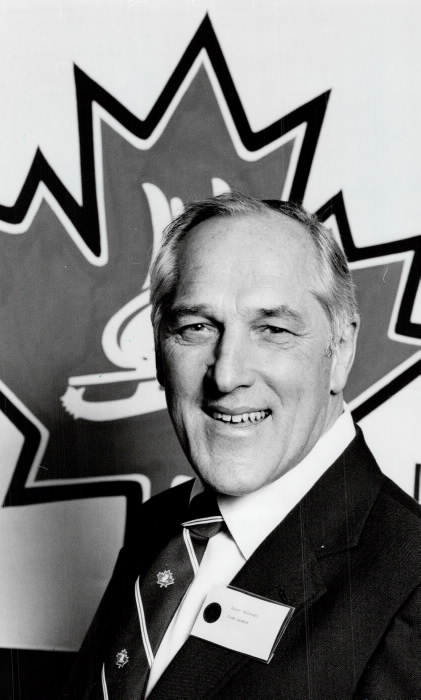 Ralph McCreath, a Canadian Champion in singles, pairs, fours and ice dancing, judged the men's and pairs events at the 1968 Winter Olympics in Grenoble, France. He told reporter Paul Rimstead that while judging the pairs event, "the tension, even among judges, was so great that two judges were sick to their stomachs before it was over."

ONE JUDGE PER COUNTRY

Herma Szabo's loss to Sonja Henie in the women's event at the 1927 World Figure Skating Championships in Oslo, Norway is often cited as the straw that broke the camel's back with regard to the ISU finally instituting its infamous "one judge per country" rule. However, in his 1948 book "The Complete Figure Skater", T.D. Richardson reminded us of an equally disturbing scenario that played out in the men's event in Davos that year: "They are lucky inasmuch as they will never be in the position that I was in the World’s Championship at Davos in 1927, wherein three Viennese skaters from rival clubs each claimed a judge or he would not skate, and the panel was made up with three Austrians, a German, a Frenchman, a Swiss and myself. Seven in all. It was skated in a blizzard. The late Jack {Ferguson] Page of Manchester was the only skater who did not fall in the ﬁgures and once or twice in the free. If ever a man won a Championship, Jack won that one, but on account of the arrangement of the panel he was placed ﬁfth - ﬁrst, second and third being Viennese - one of their judges placing him, as far as I can remember, last or last but one. I reported this matter to the NSA and kicked up an awful fuss in the public press, the direct result being the alteration of the rules of the ISU on the matter of judges and the establishment of 'one country, one judge'." 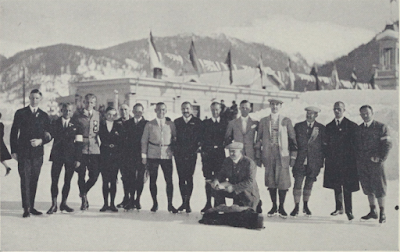 Men's competitors and judges at The 1927 World Championships in Davos

ISU historian Benjamin T. Wright noted, "At the... Congress (of 1927) at Luchon (France), a protest by Austria of the composition of the panel of judges for the World Ladies at Oslo and a demand for cancellation of the Championship, on which no action had been taken by the Council, was considered at length, but in the end the decision of the Council (to take no action) was confirmed, although it was recorded that the action of the Norwegian association was considered reprehensible and unsportsmanlike... With respect to the complaint of Great Britain, which was not a formal protest, on the apparent irregularities in the composition of the panel of judges for the World Men's at Davos, again no action was taken, no report (to the Congress) was made by the Council, but it 'indicated' that if it had found the action of the Swiss association (in nominating three Austrian judges) was also reprehensible and the Swiss association 'admitted' its error. In any event, the Council finally adopted rule changes providing for 'one country, one judge', with the actual composition of the panels of judges for ISU Championships to be controlled by the President."

Skate Guard is a blog dedicated to preserving the rich, colourful and fascinating history of figure skating and archives hundreds of compelling features and interviews in a searchable format for readers worldwide. Though there never has been nor will there be a charge for access to these resources, you taking the time to 'like' on the blog's Facebook page at http://www.facebook.com/SkateGuard would be so very much appreciated. Already 'liking'? Consider sharing this feature for others via social media. It would make all the difference in the blog reaching a wider audience. Have a question or comment regarding anything you have read here or have a suggestion for a topic related to figure skating history you would like to see covered? I'd love to hear from you! Learn the many ways you can reach out at http://skateguard1.blogspot.ca/p/contact.html.
Posted by Skate Guard Blog at February 20, 2020
Email ThisBlogThis!Share to TwitterShare to FacebookShare to Pinterest
Newer Post Older Post Home