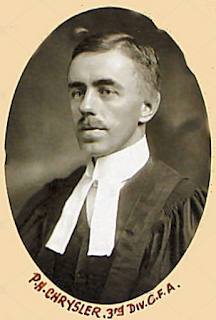 The son of Francis and Margaret (Grant) Chrysler, Philip Harvey Chrysler was born September 5, 1883 in Ottawa, Ontario. His father was a school teacher, the headmaster of the Grammar School in Hamilton, a King's Council lawyer and author. His great grandfather Colonel John Chrysler, Jr.,a noted United Empire loyalist, was an elected member of the Legislative Assembly of Upper Canada who fought in the War of 1812. The Chrysler family were extremely staunch Presbyterians and Philip, his brother Geoffrey and sisters Margaret and Constance would have had a childhood largely informed by their father's deep religious beliefs.
From 1893 to 1901, Philip was educated at Ashbury College. He went on to follow in his father's footsteps, studying law at Queen's College in Kingston and McGill University and devoting much of his time to his work as a lawyer. Nevertheless, as a young man he did find time to have a little fun. Joining the Minto Skating Club in its early days, he skated at Government House, the Rideau Rink and Dey's Arena on Laurier Avenue, learning the finer points of 'fancy' figure skating from Arthur Held, the club's first professional. At the age of twenty eight in 1911, he appeared in the Minto Skating Club's annual carnival, performing a duet with Eleanor Kingsford dressed as a Pierrot and Pierrette. That same year, he made his first appearance at the Canadian Figure Skating Championships, finishing second with Kingsford in the pairs competition behind Lady Evelyn Grey and Ormonde B. Haycock. Though competitors, the quartet of skaters also performed as a fours team together. 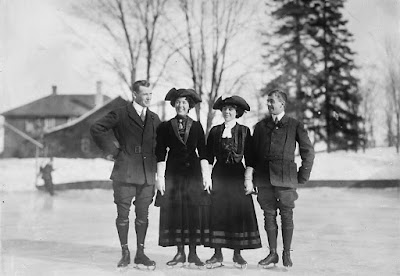 Two years later, five foot four, one hundred and thirty pound Philip entered the men's competition at the Canadian Figure Skating Championships and won on his first try, defeating Norman Mackie Scott. The following year, the two men reversed positions. What very well could have been a decade long rivalry was ended by the Great War.

Philip served in the 3rd Canadian Division of the Canadian Army and the Canadian Expeditionary Force during the War, reaching the rank of Lieutenant. However, he spent almost as much time in European hospitals as he did in service due to trench fever and chronic ear problems and was discharged in 1917. A medical board inquiry on his service record noted, "Since coming to England [his] condition has become worse owing to unfavourable climatic conditions. He has lost considerable weight and is very much run down."

Upon his return to Canada, Philip married Elizabeth Masson, took up residence on Elgin Street in downtown Ottawa and entered in a business partnership with his father. As Chrysler & Chrysler, the father/son duo became the solicitors for the Canadian Bank Of Commerce. In 1921, Philip and Elizabeth had a daughter named Philippa... but the former Canadian Champion wasn't quite done with skating yet.

In 1922, Philip returned to competitive skating after an almost ten year absence to win the Canadian fours title with Elizabeth Blair, Cecil Rhodes Morphy and Florence Wilson. The following year, the four won both the Canadian and North American titles. Not long after, Philip (then forty) opted to retire from competitive skating and devote himself to bettering the sport from the sidelines. 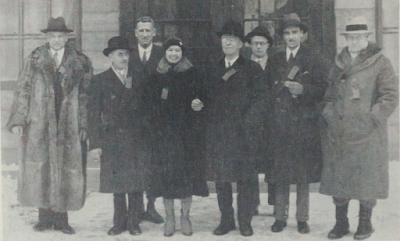 In the period from 1921 to 1926, Philip acted as Vice-President Secretary and Treasurer of the Figure Skating Department of the Amateur Skating Association Of Canada. Working closely with Louis Rubenstein, his involvement with skating continued well into the thirties through his service as a Gold level test judge. He remarried to skater Dolly Goodeve and passed away suddenly on August 14, 1948 in Ottawa at the age of sixty four, having left Canadian figure skating better than he found it.

Skate Guard is a blog dedicated to preserving the rich, colourful and fascinating history of figure skating and archives hundreds of compelling features and interviews in a searchable format for readers worldwide. Though there never has been nor will there be a charge for access to these resources, you taking the time to 'like' on the blog's Facebook page at http://www.facebook.com/SkateGuard would be so very much appreciated. Already 'liking'? Consider sharing this feature for others via social media. It would make all the difference in the blog reaching a wider audience. Have a question or comment regarding anything you have read here or have a suggestion for a topic related to figure skating history you would like to see covered? I'd love to hear from you! Learn the many ways you can reach out at http://skateguard1.blogspot.ca/p/contact.html.
Posted by Skate Guard Blog at April 09, 2020
Email ThisBlogThis!Share to TwitterShare to FacebookShare to Pinterest
Newer Post Older Post Home