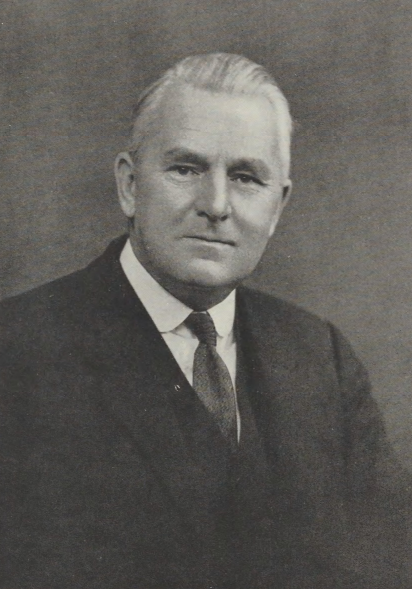 "These international meetings of sportsmen and sportswomen are some of the few good things that seem to be left in this tottery old world, and they are possibly some of the best ways of helping to put it in order again." - Herbert James Clarke, speech at the International Meeting At Davos, February 1950

Born April 10, 1879 in London borough of Lambeth, Herbert James 'H.J.' Clarke was the son of Julia (Horne) and Alfred George Clarke. He was a middle child and his father was a well-to-do member of the London Stock Exchange. The family, who resided in the elegant East Sussex ward of at St Leonards-on-Sea, were parishioners of the Church of England. 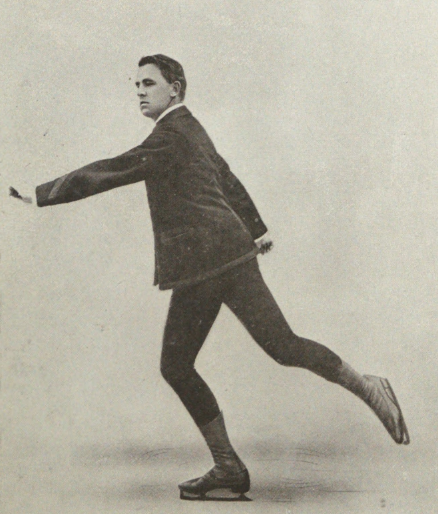 Herbert took up figure skating as a young man and was a regular at Prince's Skating Club in Knightsbridge at the turn of the century. At sixteen stone - over two hundred and twenty pounds - Herbert didn't exactly have the typical 'skater's physique'. Mentored by Bernard Adams, he developed a keen interest in both English and Continental Style skating, testing in both styles, and spent many hours on rollers as well. He earned the National Skating Association's gold medal in the International (Continental) Style and won a junior competition at Prince's in the spring of 1908, defeating Arthur Cumming, who would go on to win the silver medal in the special figures at the first Olympic Games to include figure skating later that year. In 1914 and 1924, he won the Bandy Club Cup in St. Moritz, being a regular at the Swiss skating resorts during the long English winters. He also finished third in a competition for junior skaters held in conjunction with the 1914 World Championships for women's and pairs.
When Freda Whitaker opened a small ice rink on Hertford Street in Mayfair in 1924, Herbert was there every day performing every figure on the ISU schedule. In his only appearance in a major international senior competition, the 1924 Winter Olympic Games in Chamonix, he placed a disappointing tenth out of eleven entries. 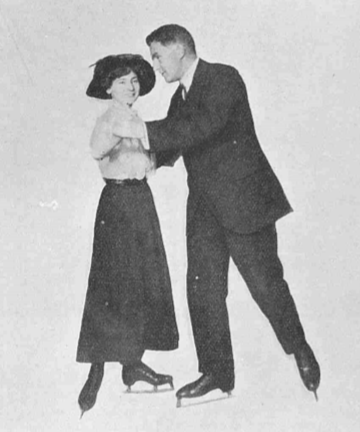 Off the ice, Herbert was a jobber with the London Stock Exchange who devoted just as much time to do golfing in the summer as he did skating in winter. In April 1906, he married Clara Kathleen Vera Kennedy. The couple settled on Hornton Street in Kensington, hiring four servants to take care of them and their young daughter Kathleen. Less than ten years later, Herbert left his wife and daughter and took up residence at the Homeside Wimbledon in Surrey. Clara was finally granted her divorce petition on February 1, 1915. During The Great War, Herbert served as a driver with the Royal Army Service Corps. 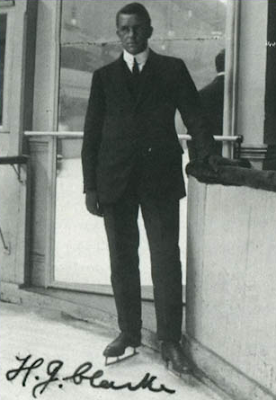 Though he was a talented athlete, Herbert's most important contributions to the figure skating world were off the ice. He served as the chairman of the Figure Committee of the National Skating Association and for a good many years. For many years, he was only one of three judges in Great Britain qualified to preside over the the Association's First Class Test. Along with Guy Campbell, Horatio Tertuliano Torromé, James Henry Johnson and Herbert Ramon Yglesias, he assisted Walter Stanton in adapting International Style of figure skating to rollers. 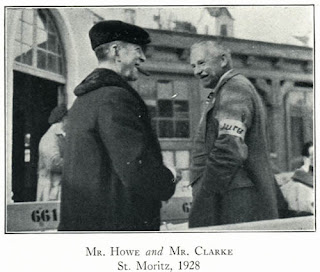 Herbert judged at his first World Championships in 1923 and sat on countless pre-World War II judging panels that awarded World or European titles to Sonja Henie, the Brunet's, Karl Schäfer, Herma Szabo, Cecilia Colledge, Megan Taylor, Graham Sharp, Maxi Herber and Ernst Baier and others. He was also a judge at the 1928 and 1932 Olympic Games and referee of countless British Championships. In her book "Advanced Figure Skating", Maribel Vinson Owen recalled a hilarious judging story about Herbert thusly: "The most uproarious loop-change-loop incident in skating history occurred at the 1932 Winter Olympics at Lake Placid. It was time for Suzanne Davis of the American team to skate the figure, starting forward on the right foot, and she picked a piece of ice right beside the hockey dasher. The judges ranged themselves at strategic points here and there, while H. J. Clarke, the revered English judge... decided that he could see best and at the same time take the weight off his over-worked feet by sitting on the fence just below Sue's starting center. Now Mr. Clarke, as all who know him will agree, is one of the more substantial of the world's skaters. Everyone who has ever seen him grinding out his rockers or laboring through his loop-change-loops on the ice of the London Ice Club invariably marvels at the dexterity of a man who weighs well over 14 stone and is built in proportion. Sue started her figure and laid out her first complete tracing. She was just on her way through the left-foot retracing when there was a sudden loud crash, a gasp of dismay from the spectators, and then, after a few seconds, bursts of such uncontrollable laughter - as a serious school figure competition has never known before - or since. Intent on Sue's efforts, Mr. Clarke had unexpectedly overbalanced and gone backward head over heels into the hockey box, where there wasn’t even a convenient chair to break his fall! The sight of such a weighty man doing a sudden back somersault off the fence at first caused instant consternation; when he ruefully but laughingly picked himself up and the crowd saw no damage was done, wave after wave of hilarity burst over the whole arena. The center of attention, however, quickly shifted from Mr. Clarke back to Sue, and she became the real star of the incident. For throughout all the uproar - and it was tremendous - she had never once so much as glanced up. She kept her attention riveted on the figure she was skating, and not until she had put down all six lines and completely finished one of the best loop-change-loop diagrams she had ever skated in her life did she allow herself a flicker of interest in what had happened. When I asked her later how she had managed such superhuman concentration, she replied that she knew if she once glanced up she'd be lost and she didn’t know whether the referee would count helpless laughter as an adequate excuse for starting a figure over again!" 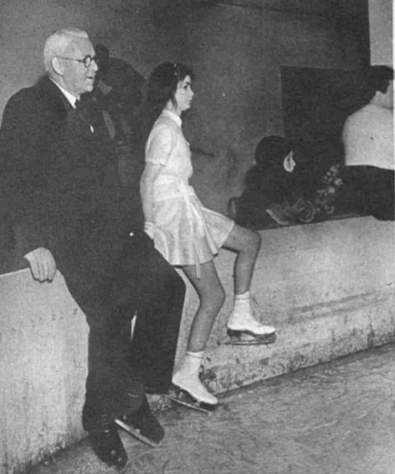 Herbert joined the International Skating Union's council in 1925, succeeding George Herbert Fowler as Great Britain's representative in the governing body of international figure skating. He served two terms as the ISU's Vice-President before becoming ISU President in December 1945 when Gerrit van Laer passed away. Under his presidency, the ISU faced the daunting tasks of rebuilding international figure skating after World War II and adapting rules that hadn't been changed in nearly a decade to reflect the evolution of figure skating during wartime. Herbert's reign celebrated the successes of skaters like Barbara Ann Scott and Dick Button, reduced the number of compulsory figures from twelve to six and added the discipline of ice dance to the World Championships. 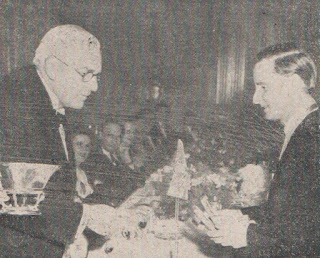 Herbert Clarke presenting awards to Hans Gerschwiler at the 1947 World Championships. Photo courtesy "Skating World" magazine.
Interestingly, during World War II Herbert was involved with the MI6. Michael Booker recalled that in the early fifties, "H. J. Clarke, had been honored for his services in the secret service during the War... With his cockney accent, [he] didn't have the right credentials to be a member of the [English Style] Royal Skating Club. He was very nice to me and a great pal of Georg Hasler, who also was very nice to me.  Some many years later when I had started collecting porcelain I met H.J´s nephew, Tim Clarke, who was 'the' porcelain expert in UK working for Sotheby's. He had been a member of the Westminster Club and knew Sonja Henie. When she died her will stipulated that he was to sell her belongings and to quote him, 'A lot of junk it was too!'" This wasn't the only example of Herbert's wry wit. On another occasion, he quipped, "If you can't skate your brackets, you can't skate." 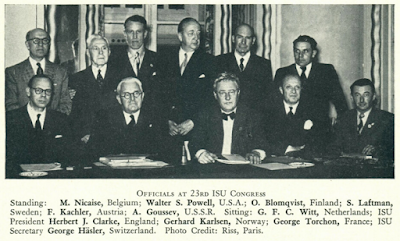 In 1949, Herbert became the first non-American honorary member of the USFSA, a gesture put forth for over twenty-five years of fostering good 'skating relations' between America and Great Britain. That was only one of nearly a dozen such honours. In an issue "Skating World" magazine from 1950, Nigel Brown remarked, "His services to skating and to skaters may best be expressed by the fact that ten nations have nominated him an honorary member of their national associations. Several foreign clubs have nominated him honorary member, including the second oldest club in the world, the Wiener Eislaufverein. This club bestowed a particular honour upon Mr. Clarke during the 1948 Winter Olympics at St. Moritz, when their President presented him with the special badge, 'Ehren Abzeichen', a title given only twenty-seven times in eighty-two years." 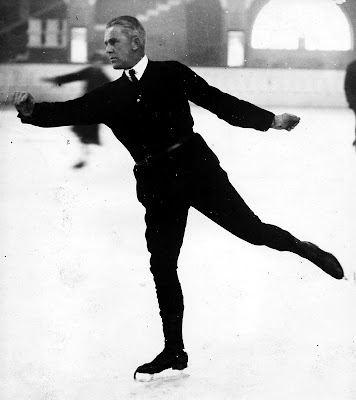 Photo courtesy "Skating World" magazine
At the 1953 ISU Congress in Stresa, Herbert ran for re-election as ISU President, defeating Gustavus H.C. Witt, whom many thought would be his successor. After losing, Witt - then the Vice President for Figure Skating - announced his retirement from the ISU. Dr. James Koch was elected as Witt's replacement.
Upon returning from Italy to his flat at Fairacres on Roehampton Lane in Wandsworth, Herbert suffered from a heart condition aggravated by bronchitis and pneumonia. That October, he unexpectedly announced his resignation. He was succeeded by Dr. James Koch and two years later elected an Honorary President of the ISU. 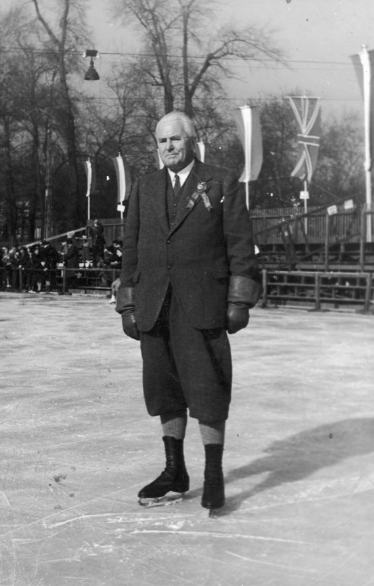 Herbert passed away on September 5, 1956 at The Putney Hospital, leaving the entirety of his sixty-seven thousand pound estate to his lawyer and a clerk at the London Stock Exchange. He was inducted to the World Figure Skating Hall Of Fame posthumously in 1996, the same year as Brian Boitano and Sheldon Galbraith. His competition and NSA test medals are among the collections of the World Figure Skating Museum in Colorado Springs.

Skate Guard is a blog dedicated to preserving the rich, colourful and fascinating history of figure skating and archives hundreds of compelling features and interviews in a searchable format for readers worldwide. Though there never has been nor will there be a charge for access to these resources, you taking the time to 'like' on the blog's Facebook page at http://www.facebook.com/SkateGuard would be so very much appreciated. Already 'liking'? Consider sharing this feature for others via social media. It would make all the difference in the blog reaching a wider audience. Have a question or comment regarding anything you have read here or have a suggestion for a topic related to figure skating history you would like to see covered? I'd love to hear from you! Learn the many ways you can reach out at http://skateguard1.blogspot.ca/p/contact.html.
Posted by Skate Guard Blog at September 21, 2021
Email ThisBlogThis!Share to TwitterShare to FacebookShare to Pinterest
Newer Post Older Post Home