A Turncoat Victory: The Duchesnay's Decision To Skate For France 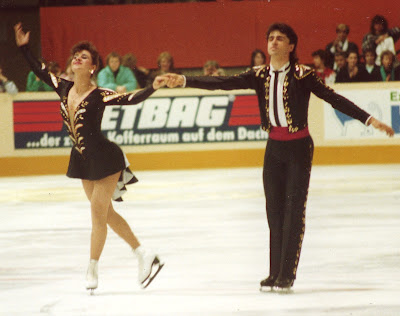 "I was the last person they dealt with in Canada, which I guess I should not be proud of... It's not my best moment and obviously I failed." - David Dore, "The Globe And Mail", March 24, 1988

Even if you were at the 1978 Canadian Figure Skating Championships in Victoria, British Columbia, you probably wouldn't have noticed them. Of the eleven teams competing in the novice pairs event that year, Aylmer, Quebec's Isabelle and Paul Duchesnay finished in dead last. 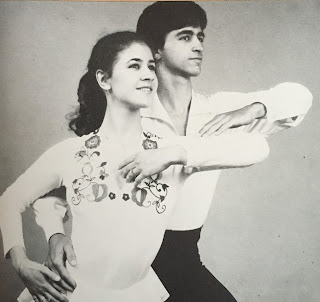 Injury forced the young siblings to reassess their goals and by 1982, the Duchesnay's had reinvented themselves as ice dancers and claimed the junior silver medal at the 1982 Canadian Championships in Brandon, Manitoba behind Teri-Lyn Black and Mirko Savic of Toronto. They spent that summer at the international training camp in Oberstdorf, where they caught the eye of Czechoslovakian coach Martin Skotnický. In the autumn, they made their senior international debut in (of all places) France, finishing third at the Grand Prix St. Gervais behind their future rivals Marina Klimova and Sergei Ponomarenko and Italy's Isabella Micheli and Roberto Pelizzola. That same month, they finished second behind Klimova and Ponomarenko at the Nebelhorn Trophy in West Germany.

Three months later, the Duchesnay's were bypassed for a spot on the World Junior team. 1982 Canadian Champions in novice dance Christine Horton and Michael Farrington were sent instead, along with another novice team, Jo-Anne Borlase and Scott Chalmers, who hadn't medalled at the previous year's Nationals. Though no 'official' explanation was given, the fact that the Duchesnay's had stayed in Ottawa and turned down the CFSA's 'suggestion' to train with Bernard Ford at the National Ice Dance Centre near Toronto appeared somewhat coincidental.

Making their senior debut at the 1983 Canadian Championships in Montreal, the Duchesnay's finished fourth behind Tracy Wilson and Rob McCall, Kelly Johnson and John Thomas and Karyn and Rod Garossino in a field of seven. In her book "Figure Skating History: The Evolution Of Dance On The Ice", Lynn Copley-Graves aptly noted that "after placing third at St. Gervais and second in the Nebelhorn, fourth at home seemed low."

The French Canadian duo's international results during the 1983/1984 season weren't exactly stellar. In September at St. Ivel in Great Britain, they were fifth in a field of seven. Two months later at the Ennia Challenge Cup in Holland, they were seventh. At the 1984 Canadian Championships in Regina, they once again placed fourth behind the same three teams (in the same order) as the year before. In a March 22, 1984 interview from "The Ottawa Citizen" during the 1984 World Championships in Ottawa, coach Betty Callaway remarked, "They work very hard and have the potential to make the national team. They have good imagination, good presence on the ice and don't mess around on top of the ice. But they must experiment more and be more adventurous." That April, the Duchesnay's finished sixth out of the fourteen teams competing at the International Morzine Trophy in France to Johnson and Thomas' second. Their rivals from the Granite Club then left the amateur ranks, opening a door for the Duchesnay's to finally make the podium at the 1985 Canadian Championships. 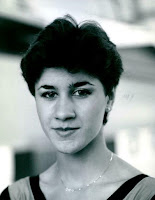 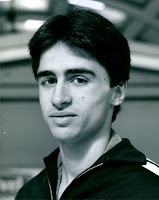 In Moncton at the 1985 Canadian Championships, the Duchesnay's finally stood on the podium, but their bronze - in a five-four split with the Garossino's - kept them off the World team. Shortly thereafter, they won the Coupe Excellence at the Claude Robillard Centre, defeating ice dance teams from France and the United States. By that autumn, shit was starting to hit the proverbial fan.

Despite being initially scheduled to compete at the Grand Prix St. Gervais, Nebelhorn Trophy and Skate America, the Duchesnay's were no-show's at all three events. The CFSA chose to instead enter the Garossino's and Canada's number five team, Jo-Anne Borlase and Scott Chalmers, at Skate Canada. When the Garossino's placed fourth at St. Ivel with a free dance that didn't go over that well, the CFSA pulled them from Skate Canada and invited the Duchesnay's to compete in London, Ontario at the last minute. Upset they'd already been 'pulled' from Skate Canada once, they didn't accept the CFSA's offer and the Garossino's were put back on the Skate Canada team. Ultimately, both the Garossino's and Borlase and Chalmers finished off the podium at that event, and frustrated with what they perceived as a lack of support from the CFSA, the Duchesnay's made a risky decision. Lynn Copley-Graves explained, "When the CFSA passed over Isabelle and Paul Duchesnay for the Skate Canada team in 1985, they gave up hopes for a berth on the Canadian World Team. Their French Canadian father had met their French mother while stationed with NATO in Metz, France, in serving the Canadian armed forces. Paul, born in Metz, and Isabelle, born in Quebec, had the option through their dual citizenship to skate for France when they realized that the CFSA would not place them high enough for international competitions. The FFSG offered to pay their expenses if they won the 1985 French Dance Championship. If they lost, their competitive days would be over." 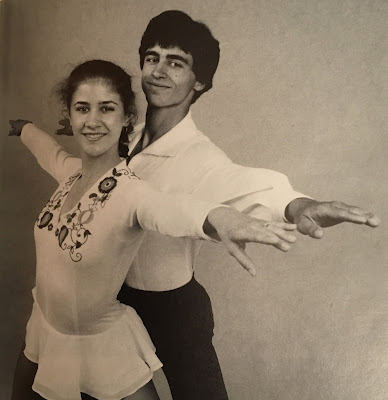 The Duchesnay's announced their decision to skate for France in an October 25, 1985 press release, saying, "We feel we have a better opportunity in France and a better chance of meeting our goals of competing in the 1988 Olympics." Then CFSA President Bruce Miller said, "It's a real loss to Canada's national team. We regret losing this talented couple." David Dore later said, "We really had no choice but to agree and let them leave." He called the situation "very simple" and said that their third-place finish at the 1985 Canadians caused them to miss the World team and the French federation had offered them training support [the CFSA] couldn't offer. Paul and Isabelle's mother Liliane said, "Isabelle made it very clear, if they didn't win [the 1985 Canadians] this meant they weren't good enough. This would be final. They were going to try it one more time." Their father Henri, pulling no punches, told a journalist from the Montreal newspaper "La Presse" that the powers-that-be at the CFSA that included David Dore played a key role in their decision to skate for France. 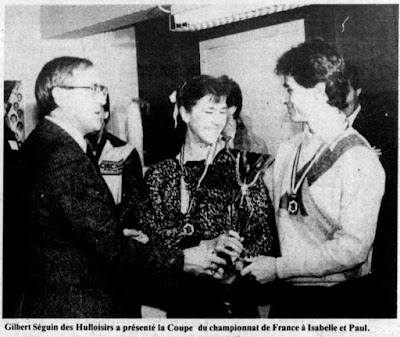 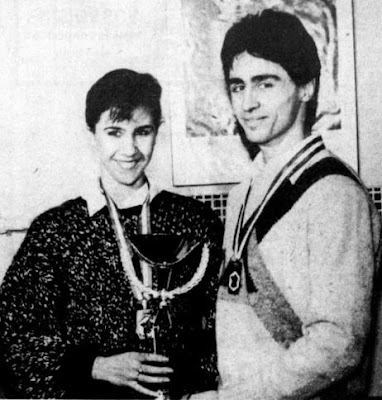 The Duchesnay's first trip to the French Championships wasn't all rainbows and puppies. In a March 15, 1986 article in "The Ottawa Citizen", reporter Martin Cleary recalled their chilly reception at that year in Lyon thusly: "Parachuting into Lyon three days before the French ice dance championships, the Duchesnay's knew they had to win or their careers were finished. The French officials, coaches and skaters gave them the collective cold shoulder. The Duchesnay's were exercising their dual citizenship option and the top French skaters felt cheated. The Duchesnay's weren't used to the wider rink and they erred by not training on it for several weeks. As a result, they placed second in the compulsory dances. Now, they had to win the original set pattern and the free dance, skated on the same day, to qualify for the worlds. If they didn't, they were ready to quit. They escaped, winning both, with the help of an enthusiastic and inspiring crowd of 5,000 in Lyon. The Duchesnay's, believing they were going to the Worlds, were relieved, while the second and third-place teams were restless. The silver and bronze medallists made their feelings well known, wearing T-shirts reading 'Merci, La France' over their outfits during the medal presentations. A couple of weeks before the European figure skating championships in Copenhagen, the Duchesnay's were told by the French federation they had to place in the top eight or the silver medallists from the French Nationals would go to the worlds." Talk about a warm welcome!


At the 1986 European Championships in Denmark, the Duchesnay's accepted the French federation's ultimatum and placed eighth of the eighteen couples competing: exactly what they needed to do to survive the chopping block. However, their free dance made such an impression on their peers that they were given a standing ovation at the athlete's banquet that followed the competition. Isabelle, in a telephone interview from their training base in Oberstdorf, told Cleary, "Someone from the French federation called me before the Europeans and said we'd finish eighth, I asked him how he knew and he told me 'my little finger told me.' I asked him what he meant and he told me don't ask. That shocked us. I asked him what we'll do at the Worlds and he said we'll probably finish 10th." That little French birdie ultimately wasn't correct in their 'prediction', but they weren't far off. At the 1986 World Championships in Geneva, the Duchesnay's placed twelfth to the Garossino's ninth. That autumn, they won their second French title and firmly established themselves as their new country's number one ice dance team. By the 1987 World Championships in Cincinnati, they were ninth to the Garossino's tenth. Borlase and Chalmers, the other team who was offered a spot at that controversial Skate Canada in 1985, were seventh. 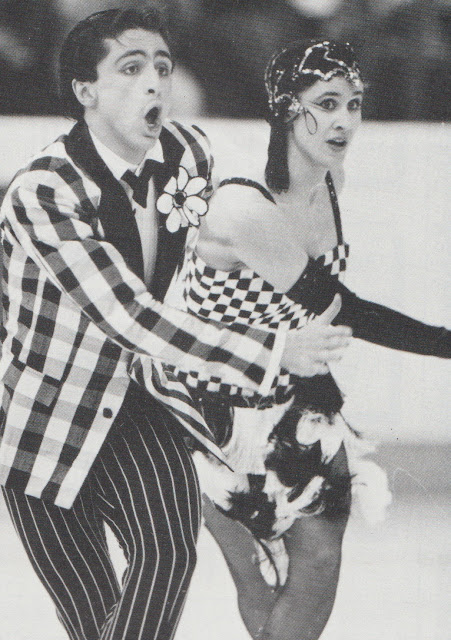 Aside from Tracy Wilson and Rob McCall in 1988, the Duchesnay's were never beat by a Canadian ice dance team again. In 1991, they made history as the first ice dance team from France to win the World Championships and in 1992, they claimed France's first Olympic medal in ice dance. Their risky turncoat gamble in 1985 was one of the first high-profile examples of an ice dance team switching countries mid-career - to their benefit.

Skate Guard is a blog dedicated to preserving the rich, colourful and fascinating history of figure skating. Over ten years, the blog has featured over a thousand free articles covering all aspects of the sport's history, as well as four compelling in-depth features. To read the latest articles, follow the blog on Facebook, Twitter, Pinterest and YouTube. If you enjoy Skate Guard, please show your support for this archive by ordering a copy of the figure skating reference books "The Almanac of Canadian Figure Skating", "Technical Merit: A History of Figure Skating Jumps" and "A Bibliography of Figure Skating": https://skateguard1.blogspot.com/p/buy-book.html.
Posted by Skate Guard Blog at August 13, 2020
Email ThisBlogThis!Share to TwitterShare to FacebookShare to Pinterest
Newer Post Older Post Home