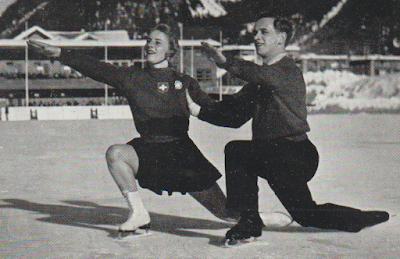 Photo courtesy "Skating World" magazine
Hailing from Le Locle, a tiny municipality in the Jura Mountains of Switzerland, Elyane Steinemann and André Calame didn't exactly grow up in the epicenter of the Swiss skating 'boom' of the first half of the twentieth century. Davos was a four hour drive; St. Moritz nearly five. Elyane started skating at the age of eight after seeing Karl Schäfer perform in Neuchâtel. Her family moved to Lausanne shortly thereafter and she joined the Club de Patinage Artistique Lausanne, passing her first skating test at the age of twelve in March of 1941. As a singles skater, she placed seventh in an international junior competition in Davos in January of 1943, but rising through the ranks during World War II meant that competitive opportunities were limited early in her career. 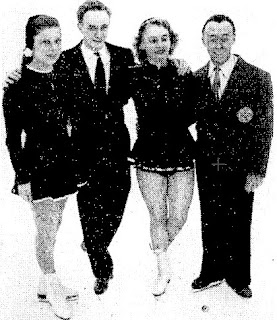 Maja Hug, Eliane Steinemann and André Calame and Kurt Sönning
André Calame was the son of a pastor and came from a very athletic family. His brother Emil was on the Swiss national football team; his brother Henry was a boxer. As a sixteen year old, he made the hour long trip from La Chaux-de-Fonds to Bern to practice skating on artificial ice. He would skate for twelve hours a day and then return home to attend business school. He claimed the Bernese men's title in 1943 and 1944. In 1946, a skating professor from Montchoisi named Miss Oetker paired the young skaters. With little guidance, they practiced alone in Lausanne for three to four hours a day. The conditions were less than ideal. André complained, "It is evident that we need room to execute our program, and that it is difficult to work seriously when you have to sneak in between the skaters. The participants of the Swiss Championships were fortunately able to get the skating rink every day for five precious minutes." These conditions, coupled with the fact the fact that Lausanne's skating season was short, meant that the young team were forced to leave the double Salchow and loop jumps they hoped to include in their program on practice ice. Despite this, they finished second to Luny Unhold and Hans Kuster at both the 1947 and 1948 Swiss Championships. 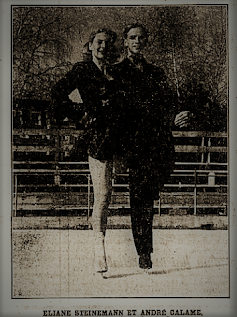 Elyane and André made their international debut at the 1948 World Championships in Davos. In a February 11, 1948 interview in "Gazette de Lausanne et Journal Suisse", they said, "We are delighted [to be selected]. We will go to Davos with joy, without nourishing the slightest hope. We will do our best, that's all. Because, there we will probably be the couple whose technical training is the most recent." They had a poor skate and finished dead last. In jest, Mr. John Nicks called André 'André Calamity'. 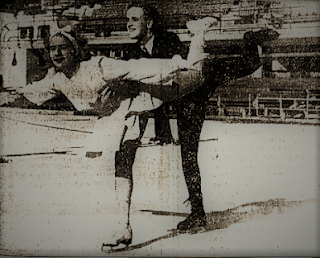 Shortly after that event, Elyane and André began working with Austrian coach Inge Solar and travelling to England in the summers to train under famed Swiss coach Arnold Gerschwiler. With proper training, their skating improved drastically over a very short period of time. From 1949 to 1951, they reigned as Switzerland's pairs champions. In both 1950 and 1951, they finished fourth at the World Championships and second at the European Championships, making history as the first pairs team from Switzerland to medal at the European Championships. They defeated some pretty accomplished teams in their brief time at the top too, including World Champions Jennifer and John Nicks and their Swiss successors, Silvia and Michel Grandjean. 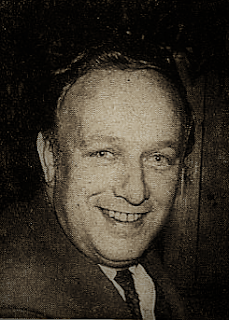 Their partnership ended when Elyane accepted an offer to turn professional following the 1951 World Championships in Zürich. André retained his amateur status long enough to win the 1952 Swiss senior men's 'B' title before joining suit. The duo skated in ice pantomimes in Wembley, the Wiener Eisrevue in Austria and Maxi Herber and Ernst Baier's Eisrevue in Germany from 1952 to 1959. Elyane moved to Canada and taught at the Riverside Figure Skating Club in Windsor, Ontario, the Noranda Figure Skating Club in Quebec and the North Shore Winter Club, Burnaby Winter Club and Vernon Figure Skating Club in British Columbia. 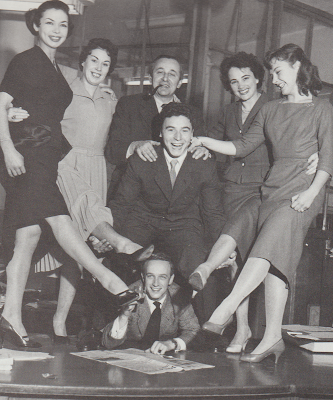 André returned to the Neuchâtel Mountains as a coach at the Locle Skaters Club. During the early sixties, France's top skaters flocked to the club to train. From 1963 to 1967, he coached the Italian skating team. Among his students were Giordano Abbondati and Rita Trapanese. In 1967, he formed an international skating school in St. Gervais, where he worked with skaters from all over Europe, including Austria's Claudia Kristofics-Binder, France's Jean-Christophe Simond, Switzerland's Mona and Peter Szabo, Belgium's Katrien Pauwels and Hungary's Jenő Ébert. He married to Simond's mother, whose first husband had died on a mountain climbing expedition. From 1968 to 1970, he served as the Swiss Skating Federation's Secretary and from 1976 to 1981, he taught in Megève. He was a much sought-after coach and turned down offers to teach in Paris, Basel and Moscow in order to stay in Switzerland. He sadly passed away suddenly of a heart attack at the Orly airport in Paris at the age of fifty five on November 26, 1982. Elyane passed away on October 25, 2009 in Hinton, Alberta.

Skate Guard is a blog dedicated to preserving the rich, colourful and fascinating history of figure skating and archives hundreds of compelling features and interviews in a searchable format for readers worldwide. Though there never has been nor will there be a charge for access to these resources, you taking the time to 'like' on the blog's Facebook page at http://www.facebook.com/SkateGuard would be so very much appreciated. Already 'liking'? Consider sharing this feature for others via social media. It would make all the difference in the blog reaching a wider audience. Have a question or comment regarding anything you have read here or have a suggestion for a topic related to figure skating history you would like to see covered? I'd love to hear from you! Learn the many ways you can reach out at http://skateguard1.blogspot.ca/p/contact.html.
Posted by Skate Guard Blog at January 19, 2021
Email ThisBlogThis!Share to TwitterShare to FacebookShare to Pinterest
Newer Post Older Post Home
"As a rule an author has one or two popular ways of contrasting the past with the present. He can treat the past as lying in comparative doleful ignorance, or he can explain that the past was infinitely superior to the day we live in. Of course, either method is the popular journalism of the moment, and in reality there is no sharp contrast, but a gradual transition which leads the past into the present." - Joel B. Liberman, Skating Club Of New York