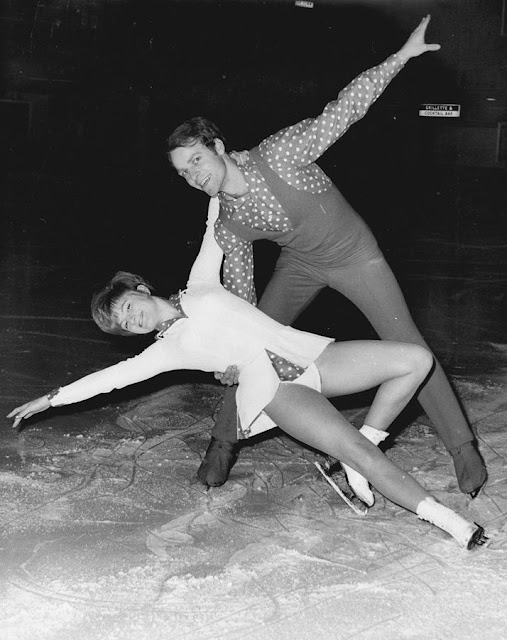 Photo courtesy "Ice Skate" magazine
Hilary Green first headed to the rink as a ten year old in 1961 after seeing a televised skating broadcast on BBC. Glyn Watts got his start on rollers around the age of six or seven, when his older sisters who were babysitting him dragged him to a rink. He finished third at the national level and was going to go international, but his coach moved to New Zealand. After finishing school, he relocated from the small town of Herne Bay to London at the height of Beatlemania, where he apprenticed as a women's hairdresser with Vidal Sassoon . Celebrities regularly frequented the salon and he got to rub shoulders with Paul McCartney himself. Glyn took up ice skating as a personal challenge but found the transition from rollers to ice incredibly difficult. Soon, he met Hilary, and the two formed an unlikely dance duo. They trained at the Silver Blades rink in Streatham with Peri Horne, a 1952 Olympian in pairs skating. "We struck the right balance from the start. Glyn is nearly a foot taller than my five feet two inches, and we size well together," said Hilary in a 1974 interview with sportswriter Howard Bass. 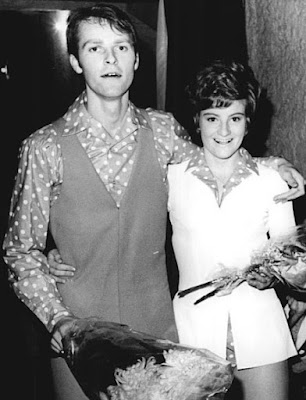 Photo courtesy German Federal Archives
Hilary and Glyn made their debut at the British Ice Dance Championships in November 1966, finishing fourth in the junior event. The following autumn, they placed third at the Queens Cup Open Ice Dance competition behind Yvonne Suddick and Malcolm Cannon and Susan Thompson and James Young and sixth in their first appearance as seniors at the British Championships. By 1969, they'd moved up the ranks to third and earned a trip to their first international competition, the 1970 European Championships in Leningrad, where they placed an impressive seventh.
Video courtesy Frazer Ormondroyd
In the two years that followed, Hilary and Glyn earned two British silver medals and top ten finishes at two European and two World Championships. By November of 1972, when they earned their first of four British consecutive titles, they were considered bona fide medal contenders. Continuing to train under Peri Horne's watchful eye, both worked part-time to help pay for their training expenses, supplementing the cost with sponsorship by John Staples of MK Skates. The duo took took ballet lessons and did muscle-building exercises at a London hospital. They trained between eleven o'clock at night and three o'clock in the morning at the Streatham rink and on ridiculously crowded public sessions. 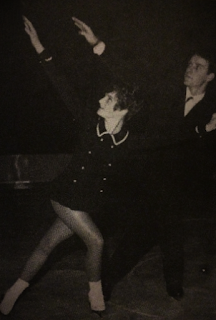 All the hard work paid off at the 1973 European Championships in Cologne, West Germany, where Hilary and Glyn staged a major upset by defeating Janet Sawbridge and Peter Dalby and claiming the bronze medal. It was Janet's tenth European Championships... and she had medalled at six of them. 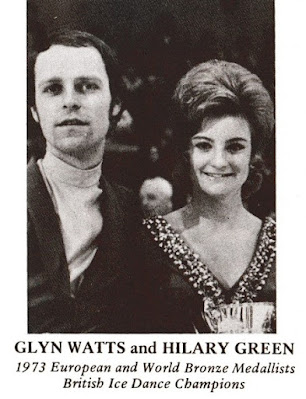 At the World Championships that followed in Bratislava, Hilary and Glyn again managed to win bronze ahead of Sawbridge and Dalby, firmly establishing themselves as Britain's number one ice dance team. 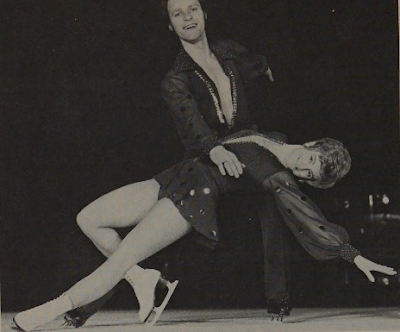 That October, Hilary and Glyn defeated twelve other teams including future Olympic Gold Medallists Natalia Linchuk and Gennadi Karponosov to win the Prestige Cutlery Awards. They also won the very first Skate Canada International in Calgary, besting Louise and Barry Soper, Irina Moiseeva and Andrei Minenkov and eight other teams. It was, Glyn remembered, "a bloody good experience. What a lovely place! We took a trip down to Banff. I sometimes wonder why I came to the States!" At the 1974 European and World Championships, they moved up to second behind Lyudmila Pakhomova and Alexander Gorshkov. 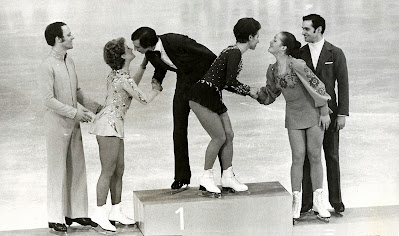 Hilary Green and Glyn Watts on the podium at the 1974 World Championships. Photo courtesy "Skate & Ski" magazine.
If ever there was a time that Hilary and Glyn thought they should have placed higher, it was in Munich at the 1974 World Championships. To improve their compulsories, they'd started working with Bernard Spencer - a stickler for good technique. Though Pakhomova and Gorshkov turned heads with their Tango Romantica, Hilary and Glyn's OSP was equally delightful. Glyn recalled, "We had a tango to Habanera from Carmen. We had gone with Bill and Bobbie Irvine, who were the ballroom dance champions ten times in England. They choreographed it for us and the crowd just loved it. I think Brian Moynahan was the correspondent and he said it was by far the better of the OSP's - it had such a tango feel. The free dance we had that year was pretty good too, so I thought we had a good chance. Second was good, but first would have been better." Later in the year, the National Skating Association honoured them with the prestigious Vandervell Trophy. Although many considered Pakhomova and Gorshkov unbeatable, Hilary and Glyn held onto hope that they might somehow stage an upset two years later at the very first Olympic ice dance competition in Innbsruck in 1976. 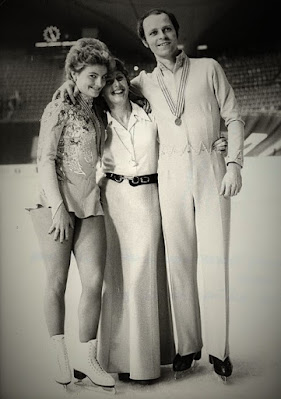 By 1975, signs were already starting to show that their number two position in the political world of ice dance was in jeopardy. Though they held on to win silver at the European Championships in Copenhagen when Glyn was sick with chest congestion, they did so on the strength of their compulsories. The judges placed them third in the free dance behind Linichuk and Karponosov. At the World Championships that followed in Colorado Springs, they dropped to third behind two teams that they had defeated the previous years, Moiseeva and Minenkov and Americans Colleen O'Connor and Jim Millns.
At the 1975 World Championships in Colorado Springs, Hilary and Glyn made a little skating history by being the first amateur ice dance team to include a kiss in their performance in their Blues OSP. Glyn recalled, "We had a little sequence where we were slow dancing in the corner. I used to be a bit of ham and there was one section where we'd do this smooching kiss and then breakaway. Every time I'd breakaway I'd look at that section of the crowd and pull a stupid face. They caught on to this, so by the second or third pattern - because you used to have to do three patterns - they were just waiting for it." 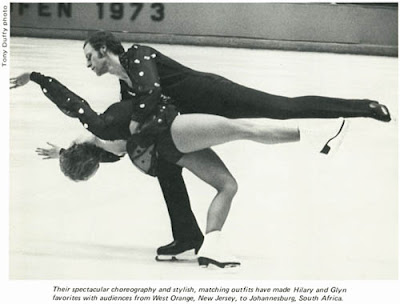 By the Olympic season, Hilary and Glyn were receiving stiffer competition at home from Kay Barsdell and Kenneth Foster and Janet Thompson and Warren Maxwell. Although they managed to win their fourth British title, they dropped to fifth at the European Championships and placed a shocking seventh at the Winter Olympics. Glyn remembered, "We had a really tragic year. I don't like to make excuses, but when you're a partnership you really are one person. Hilary's father came down, earlier in the year, with really bad cancer. She was terribly close to her Dad. Subsequently, he was admitted to the Royal Marsden... very frequently in and out, in and out. We'd get to the rink and she'd break down crying. I don't think we had a solid week of training. It was always two or three days on, then off. I'll be honest. We shouldn't have gone to the Olympics. It was the fact that it was the first time. You cross your fingers and hope everything's going to work out but as much as I'm thrilled to have been an Olympian, it was really not such a great experience. It was disappointing to finish that way." 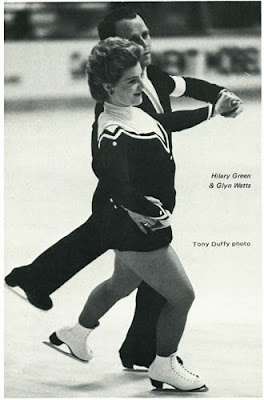 Photo courtesy "Skating" magazine
Not long after, Hilary followed Peter Dalby to America to embark on a coaching career, but was homesick and returned to England not long after. Glyn taught in England for a while, taking Denise Best through her Gold Dance Test, before going to America also. John Curry had mentioned him to Nancy Streeter, who was President of the Skating Club of New York at the time. He taught there with Sonya and Peter Dunfield, building up the dance program at the Sky Rink. Within six months, he was standing at the boards with his first champion pupils, Judi Genovesi and Kent Weigle. He went on to coach in New Jersey and Connecticut and while teaching with Peter Burrows in Long Island, he started working moreso with singles skaters - among them Burrows' future wife Katherine Healy. Glyn recalled, "I had the opportunity to go back to England to open a hotel business with my in-laws. We were there for about six or seven months but things just didn't work out. I looked into coming back to the States. I still had my green card, so I was current. I had a nice offer from the Boston Skating Club, one from Atlanta and Carol [Heiss Jenkins]. Carol had met me a few times at Nationals and said she'd watched how I was with the kids and thought I'd be a good fit for her, so I came to Cleveland. I think my first lesson was Lisa Ervin, when she was like seven years old or something... We've been here ever since." Over the years, Glyn has worked with a number of top American skaters, including Lisa Ervin, Tonia Kwiatkowski, Timothy Goebel, Jenni Meno, Aren Nielsen, Colin and Parker Pennington and Ryan Hunka.
Hilary has coached for decades in Great Britain, and recently worked out of the Absolutely Ice arena in Slough, a town just west of London, England. Glyn coaches at the Winterhurst Arena three days a week, but is planning on retiring this year. His coaching partner is now Tonia Kwiatkowski, his former student. He was rinkside in Detroit at the 1994 U.S. Championships, when the attack on Nancy Kerrigan occurred. He remembered, "We had Lisa and Tonia. I was in the Cobo, the other training rink, with Lisa. We were just sitting watching the practices and all of a sudden there was a scuffle across the rink, people running in and out the curtains and the next thing we heard Nancy's been attacked and all this business. In all fairness, I know she got in with a bad crowd but in the locker room, I liked Tonya! She was a rough and ready girl. I'm not condoning what she did but... she was sociable, she'd say hi. She was approachable."
Though Hilary and Glyn won three medals at the World Championships, they are perhaps the most overlooked top ice dance team of the seventies. Their career, despite its challenges, deserves far more recognition.

Skate Guard is a blog dedicated to preserving the rich, colourful and fascinating history of figure skating and archives hundreds of compelling features and interviews in a searchable format for readers worldwide. Though there never has been nor will there be a charge for access to these resources, you taking the time to 'like' on the blog's Facebook page at http://www.facebook.com/SkateGuard would be so very much appreciated. Already 'liking'? Consider sharing this feature for others via social media. It would make all the difference in the blog reaching a wider audience. Have a question or comment regarding anything you have read here or have a suggestion for a topic related to figure skating history you would like to see covered? I'd love to hear from you! Learn the many ways you can reach out at http://skateguard1.blogspot.ca/p/contact.html.
Posted by Skate Guard Blog at September 22, 2020
Email ThisBlogThis!Share to TwitterShare to FacebookShare to Pinterest
Newer Post Older Post Home