From Nishinomiya To Nagano: The Junko Hiramatsu Story 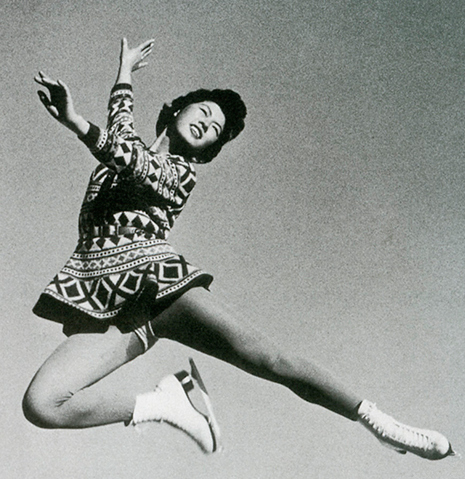 Between Ashiya and Amagasaki in Japan's Hyōgo Prefecture is a small city called Nishinomiya. Today, the city is perhaps best known for its production of sake and bamboo crafts but on November 1, 1942 it was the birthplace of a woman who would grow up to break many barriers in what was at the time a very male dominated sport in Japan. 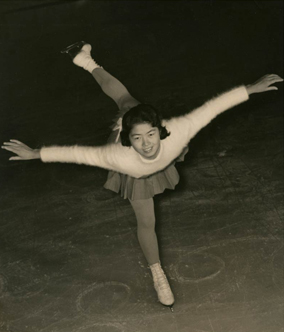 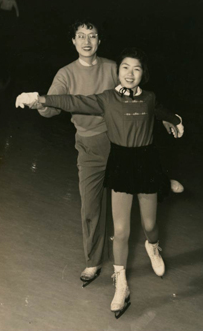 Junko Ueno is the eldest daughter of Kinuko Ueno (Nakamura), who won three medals at the Japanese Championships in the late thirties. Junko's mother won the silver medal at the 1939 Japanese Championships. Like many skaters around the world, her career was effectively ended by World War II and the cancellation of the 1940 Winter Olympics. 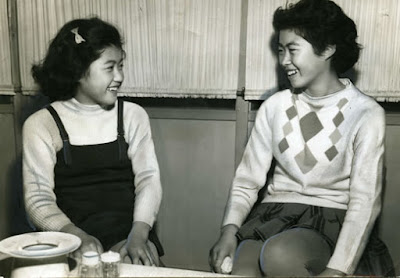 Junko's first exposure to skating was at the age of six or seven, when Mount Rokko froze over and her mother took her to play on the ice. She took up ballet around the same time, but didn't start taking skating lessons until she was ten, in her fourth year of elementary school, at the Hanshin Ice Palace. It was clear to Kinuko that Junko had real potential as a skater, so she enlisted the help of her former rival Etsuko Inada. As a coach, Etsuko was based in Tokyo, so four times a year she came to Kobe to work with Junko and in the summers Junko was sent there to practice. Junko was extremely shy as a young girl and skating helped bring her out of her shell.

While attending the Konan Girls' High School, Junko made progress as a skater but training conditions were always a concern. At her local rink, she often had to clear the ice with a broom and flood the rink with a hose herself. At the 1956 Japanese Championships at the Kyoto Arena, she won the gold medal in the senior women's class. It would prove to be the first of eight consecutive senior medals she'd win in years to come. 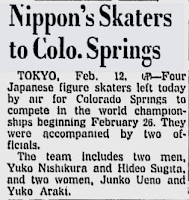 Inspired by videos of 1956 Olympic Gold Medallist Tenley Albright, Junko became determined to compete on the same level herself. Her first international competition (and trip to North America) was the 1957 World Championships at the Broadmoor Ice Palace in Colorado Springs. She finished seventeenth of twenty entries. Hardly an overnight success, but she didn't give up. 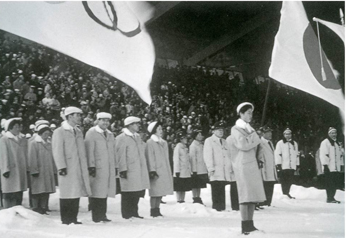 Three years later, at the age of seventeen, Junko made history at the 1960 Winter Olympic Games in Squaw Valley as the first female flag bearer for Japan in history. Unfortunately, the judges didn't know quite what to do with her that year. Her ordinals at the school figures at those Olympics ranged from eighth to nineteenth... and she again finished seventeenth. Four years later at the 1963 World Championships in Cortina d'Ampezzo, Italy? You guessed it! Seventeenth. It was really turning out to be Junko Ueno's unlucky number. 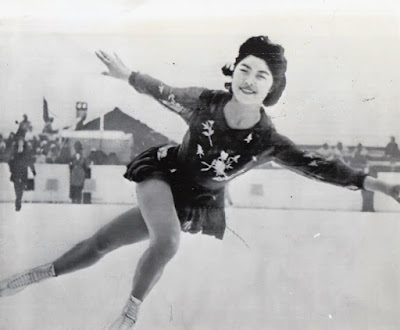 However, not every competition was a disappointment for Junko. She won the 1962 Winter Universiade competition in Villars, Switzerland, besting skaters from Czechoslovakia and Hungary. That said, by 1964 Miwa Fukuhara and Kumiko Okawa had firmly established themselves as Japan's top two female skaters. Out of favour as the country's third entry, she finished all the way down in twenty-second at the 1964 Winter Olympics in Innsbruck, Austria. It was a bitter pill to swallow, as Junko and Miwa Fukuhara shared a coach and Miwa had started skating a year or two after she did. 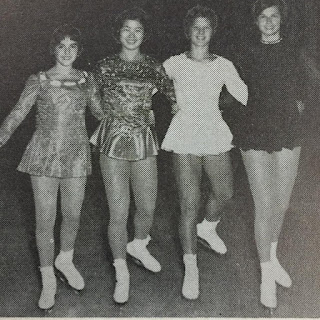 The summer after the 1964 Winter Olympics, Junko had the opportunity to attend the Schumacher summer school in Ontario, Canada. She was fascinated by the fact Canadian skaters kept copies of the CFSA rulebook in their lockers and became good friends with Jeannie Sanders from the East York Skating Club, who later stayed with her in Osaka, where the two skaters worked as amateur coaches and trial judged together.

Her competitive career on a downward trajectory, Junko made an important life decision. Instead of joining a show or coaching, she would become a judge. After graduating from Kwansei Gakuin University with a Faculty Of Letters degree from the department of history, she married businessman Hiroshi Hiramatsu and began studying the in's and out's of judging intensely. 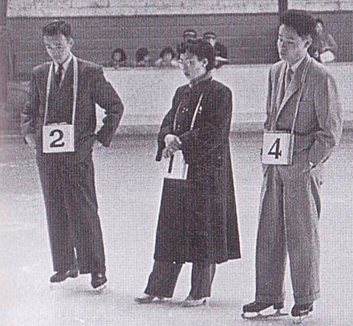 In 1971, Junko passed ISU tests and became one of Japan's first female international referees. Two years later, she emigrated with her husband to New York to raise a family and had her first international judging assignment at the very first Skate Canada competition. Although she initially found adapting to life and parenting in America difficult, the opportunities to hone her judging skills in North America proved invaluable.

Junko's first assignment at an ISU Championship was the 1979 World Championships in Vienna, where she judged the pairs competition. Throughout the eighties, she was tremendously busy, travelling to Europe and Canada and dishing out 5.7's and 5.8's like nobody's business. Like all judges, she wasn't without her controversies. She didn't go unnoticed at the 1988 Winter Olympics in Calgary, when she was the only judge to give a higher artistic mark to Brian Boitano, Brian Orser was critical. In the February 22, 1988 issue of The Telegraph, he remarked, "That's difficult for me because she lives in New York City. That's almost like having two American judges on the panel." 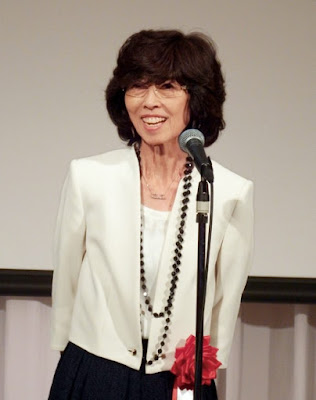 Name an international figure skating competition since the eighties and chances are Junko was there in some capacity. In 1994, she supervised the Japanese women's figure skating team in Lillehammer. In 1998, she took the Officials Oath at at the Nagano Olympics during the Opening Ceremonies. At the Salt Lake City Olympics in 2002, she was the Assistant Referee in the men's event. The next year, following the whole 'shared gold' debacle in Salt Lake City, she was appointed to the ISU Technical Committee, where she of course became involved in the introduction of the IJS system. Four years later, she served as the Technical Controller in the pairs event at the Torino Olympics where there was certainly a far less controversial result. Since 2006, she's succeeded Nagahisa Ono as chair of the Japan Skating Association, served as director of the Japan Olympic Committee and vice-chair of the Hyōgo Prefecture Athletic Association, taught as a professor of physical education at the Kobe Pharmaceutical University and served on the Kobe City Board Of Education. In 2010, she was appointed to the ISU Council.

Whatever way you put a level four spin on it, Junko has made tremendous contributions to the sport - not only in her country but worldwide. A two-time Olympian, five-time Japanese Champion, pioneering female judge, referee and official, she more than serves the memory of her late mother Kinuko whose opportunity to skate in the Olympics was taken away from her by that disgusting thing called war.

Skate Guard is a blog dedicated to preserving the rich, colourful and fascinating history of figure skating and archives hundreds of compelling features and interviews in a searchable format for readers worldwide. Though there never has been nor will there be a charge for access to these resources, you taking the time to 'like' on the blog's Facebook page at http://www.facebook.com/SkateGuard would be so very much appreciated. Already 'liking'? Consider sharing this feature for others via social media. It would make all the difference in the blog reaching a wider audience. Have a question or comment regarding anything you have read here or have a suggestion for a topic related to figure skating history you would like to see covered? I'd love to hear from you! Learn the many ways you can reach out at http://skateguard1.blogspot.ca/p/contact.html.
Posted by Skate Guard Blog at June 01, 2021
Email ThisBlogThis!Share to TwitterShare to FacebookShare to Pinterest
Newer Post Older Post Home