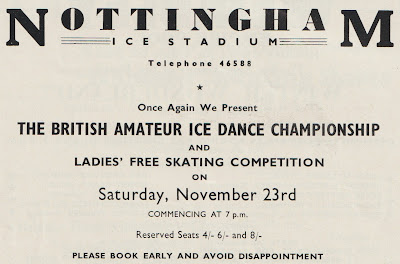 Photo courtesy "Skating World" magazine
Back in the forties and fifties, British skating titles weren't all decided at one event as they are today. Different competitions were decided at different rinks, often with combined bills we would consider quite out of the ordinary today. As an example, it wasn't unheard of for a junior pairs competition to be on the same bill as a professional women's competition. Today we'll take a quick look back at the (many) British Championships of the 1957-1958 season! 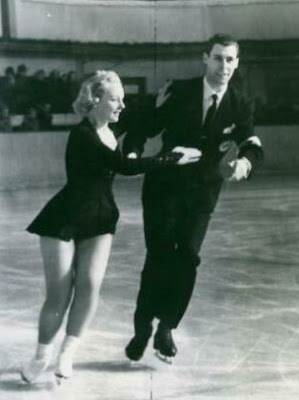 June Markham and Courtney Jones
On November 23, 1957, seven couples gathered at the Nottingham Ice Stadium to compete for top honours at the Amateur Ice Dance Championship of Great Britain. After the four compulsory dances - the Foxtrot, Westminster Waltz, Kilian and Rhumba - defending champions June Markham and Courtney Jones managed a ten and a half point lead over their closest challengers, Kay Morris and Michael Robinson. They convincingly won the free dance by ten points as well, to easily defend their title. 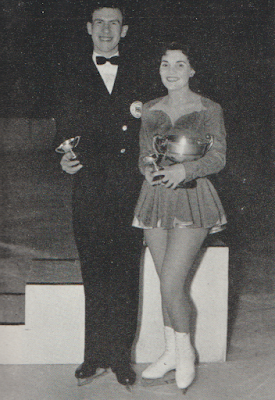 Kay Morris and Michael Robinson as winners of the Tomlinson Trophy in the autumn of 1957. Photo courtesy "Skating World" magazine.

Though defeated by Barbara Thompson and Gerry Rigby in the free dance, Morris and Robinson managed to take the silver by one ordinal placing. Bunty Radford, bronze medallist at the 1955 World Championships with Raymond Lockwood, finished fourth with new partner Terence Orton. Reginald J. Wilkie recalled, "I found the free dancing most interesting. The highlight of the evening was Jones-Markham's programme, skated at speed to fast music, changing through to a tango, beautifully in character, and then a waltz. A magnificent programme and wonderfully executed. I cannot remember seeing a finer performance anywhere." All seven couples were accompanied by Douglas Walker on the Stadium's new organ. 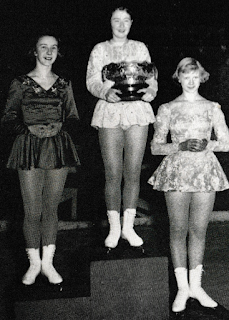 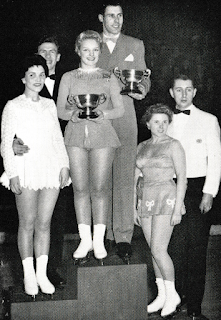 Held in conjunction with the Amateur Ice Dance Championship of Great Britain was the ladies' amateur free skating competition for the Martineau Bowl. This event didn't include school figures, nor did it determine the British women's title. Of thirteen entries, Richmond's Barbara Conniff came out on top. 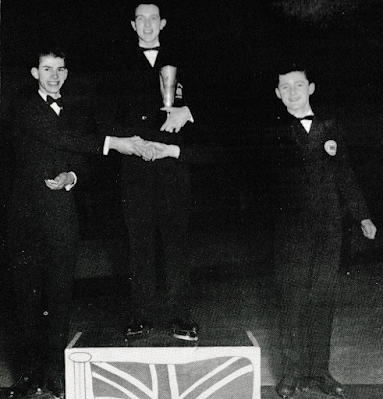 The British Amateur Figure Skating Championships for men, women and pairs were held on December 4, 1957 at Streatham Ice Rink. Former Royal Air Force pilot Michael Booker trounced the competition in the men's event, winning his sixth consecutive British title. T.D. Richardson recalled, "I think his service in the RAF has strengthened him - his skating seems more mature, that of one who commands the ice... Booker's [free skate] was an outstanding performance, with speed, sureness and accuracy in the highlights of an exhibition which becomes more masterly every time we see it." One hundred and sixty four points back in second was another member of the Royal Air Force named Keith Kelley. Unlike Booker, who had finished his service, Kelley was on leave and was not well prepared. Rodney Ward took the bronze, ahead of Peter Burrows and Australia's William Cherrell. At the time, skaters from Commonwealth countries were more than welcome to vie for British titles if they so desired." 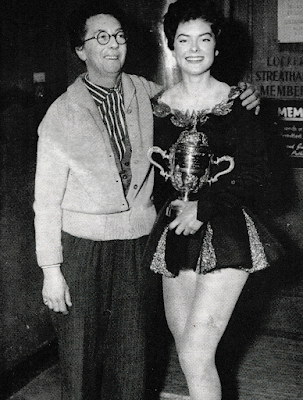 Miss Gladys Hogg's student Dianne C.R. Peach wracked up such a commanding lead in the women's school figures that all that she had to do in the free skate was skate conservatively, and that's what she did to win the title that had been left undefended by Erica Batchelor, who had turned professional.

Patricia Pauley held on to take the silver ahead of another (unrelated) Peach, Diana Clifton-Peach. Carolyn Krau, the only woman to land a double Axel, placed fifth, just two spots ahead of future World Champion in ice dancing Doreen Denny. 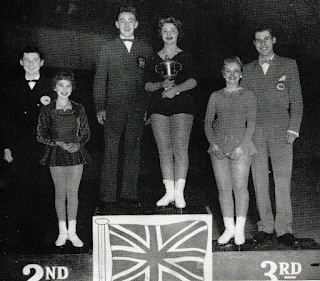 Carolyn Krau and Rodney Ward, Joyce Coates and Anthony Holles and June Markham and Courtney Jones, 1958 British pairs medallists. Photo courtesy BIS Archives.
T.D. Richardson reported on the pairs event in Streatham for "Skating World", while his wife Mildred sat on the judging panel. The Richardson's had represented Great Britain at the 1924 Winter Olympics. Mollie Phillips, another Olympian who won the British pairs title in 1933, also served as a judge, as did A. Proctor Burman, a six time pairs medallist at the British Championships. The winners of the title and Johnson Trophy (donated by another famous British pair, Phyllis [Squire] and James Johnson) were Joyce Coates and Anthony Holles of Liverpool. It was the pair's third consecutive British title. Carolyn Krau and Rodney Ward took the silver, just one ordinal placing ahead of British dance champions June Markham and Courtney Jones. Considering the NSA's Gold Dance Test required couples to perform a pairs free skating program as well as a free dance, Markham and Jones' entry wasn't considered at all unusual. At that point in time, couples often used the same program and simply added or subtracted elements as necessary. 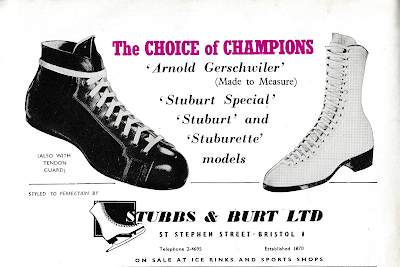 Photo courtesy "Skating World" magazine
The British Amateur Junior Figure Skating and Ice Dance Championships were held on March 12 and 13, 1958 at Westover Ice Rink, Bournemouth. Barbara Conniff, who had won the Martineau Bowl in the autumn, was the unanimous winner in the junior women's event, winning both the figures and free skate by more than twenty points. Christopher Robin Jones won the junior men's free skate, but finished his third place finish in the figures kept him behind David Clements. Jacqueline Pinto and John Anderson were the unanimous winners of the junior pairs event, while Jane Gray and Tony Berresford took the junior dance title despite earning less points than silver medallists Mary Walsh and David Clements. T.D. Richardson recalled, "In the daytime, during the skating of the school figures, something went wrong with the ice, making the task of both skaters and judges extremely difficult - especially for juniors. Seasoned, hard-baked competitors might have known how to hope, but as it was the same for all of them the result was probably not affected, and this despite some of the widest discrepancies of marks ever seen - with a British panel." Richardson wasn't exaggerating. Valerie Carter, who finished fourth in the junior women's event, had ordinals ranging from second through twelfth, and Clements and Walsh had ordinals ranging from first through sixth in junior dance... these from highly experienced judges. 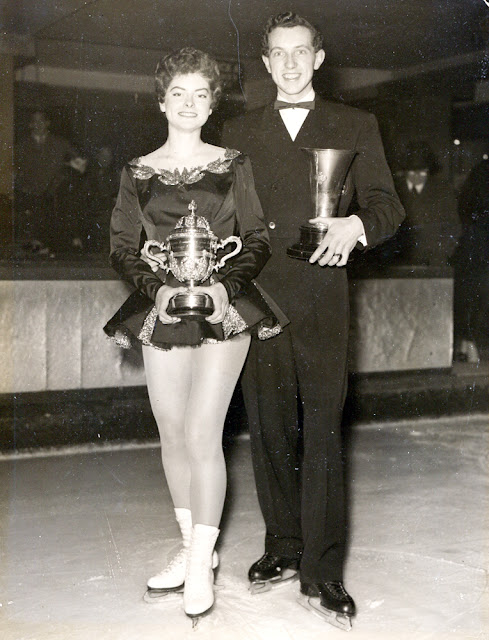 The Championship of Great Britain for figure skating in The English Style was held at the Sports-Drome, Richmond, on March 16 and 17, 1958. It was only the third (non-consecutive) time the event had been contested since World War II ended. S.P. Jordan, who had been runner-up in both of the other post-War Championships, finally won the title with three hundred and ninety out of a maximum of six hundred points. 1957 Champion F.C. Lowcock finished second. The Challenge Shield for combined figure skating was won by Manchester's J. Wilson, F.C. Lowcock, N.G. Darrah and Kay Johnstone. Kay also won the Junior Competition for a cup donated by Humphry Cobb. The Bear Cup event for combined figure skating (teams of four) was one by N.G. Darrah, N. Darrah, B. Wilde and J. Wright. 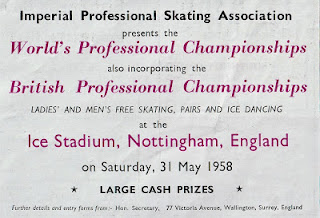 Top photo courtesy "Skating World" magazine
The final British Championships of the 1957-1958 season were the (World's and) British Open Professional Championships, held at the Nottingham Ice Stadium on May 31, 1958. As was the custom at these events, the highest ranking British skater in each discipline was named the British Open Professional Champion and the winner the World's Open Professional Champion. Americans Ronnie Robertson and Catherine Machado won the World singles titles. British immigrants to Canada Rosina and Raymond Lockwood won both pairs and dance. The British winners were Martin Minshull, Patricia Edwards, Peri Horne and Basil Cudlipp-Green and Joan (Dewhirst) and John Slater.
Skate Guard is a blog dedicated to preserving the rich, colourful and fascinating history of figure skating and archives hundreds of compelling features and interviews in a searchable format for readers worldwide. Though there never has been nor will there be a charge for access to these resources, you taking the time to 'like' on the blog's Facebook page at http://www.facebook.com/SkateGuard would be so very much appreciated. Already 'liking'? Consider sharing this feature for others via social media. It would make all the difference in the blog reaching a wider audience. Have a question or comment regarding anything you have read here or have a suggestion for a topic related to figure skating history you would like to see covered? I'd love to hear from you! Learn the many ways you can reach out at http://skateguard1.blogspot.ca/p/contact.html.
Posted by Skate Guard Blog at March 09, 2021
Email ThisBlogThis!Share to TwitterShare to FacebookShare to Pinterest
Newer Post Older Post Home