Is One The Loneliest Number? Ice Cold Facts About Skating First 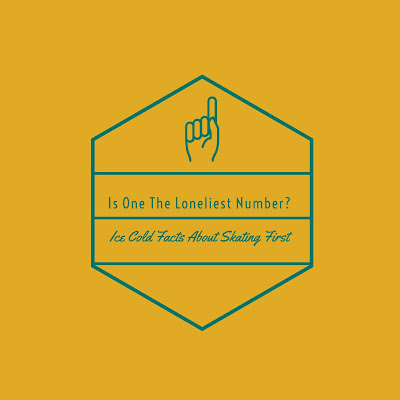 "Skating No. 1 is disasterville. The judges tend to be conservative because there might be 20 skaters to go." - Olympic and World judge Dorothy Leamen, "The Ottawa Citizen", February 15, 1980
On a chilly February day in 1968 in Grenoble, France, a huddled mass of skaters and officials gathered in a room and by country, alphabetically drew numbers to determine their starting order for the women's school figures at the Winter Olympic Games. Thirty-one skaters drew their positions and only one number remained in the hat. By a process of elimination, the last skater to draw a slip, Galina Grzhibovskaya of the Soviet Union, was left with the dreaded starting position. Galina placed a dismal twenty-fifth out thirty-two women in the figures in those Games.
For many decades, there has been a negative perception surrounding being the first to skate in a competition, but this wasn't always in the case. In figure skating's early days, when competitions were held outdoors, many skaters were overjoyed when drawing lots resulted an earlier position in the starting order if Mother Nature wasn't being particularly benevolent. No one wanted to stand around for an hour waiting for their turn to perform in minus thirty degree weather, nor did they particularly relish the thought of risking a change in the weather. Many competitions that began with a light snowfall ended in a blizzard, and as weather conditions deteriorated, so too did the ice in the days before Zamboni's. The time of day even played a factor. Some competitions began at dusk and didn't conclude until the wee hours of the morning. If you skated last, chances are the exhausted judges would have a pretty hard time seeing the spectacular double Salchow you landed in the pitch dark.

ISU regulations pertaining to starting order, 1933
Though there were some skaters who drew the starting position in international competitions prior to 1935 who were far from pleased with it - Sonja Henie among them - it really wasn't until just before World War II broke out, three years after the Open Marking System was introduced, that skaters really began grumbling about drawing the number one. Though judges had already been forbidden from changing their marks after they'd recorded them, there was no real way of policing this until judges were required to display their marks on placards immediately following each performance. If a judge really wanted to go back and give higher marks to the first skater under the Closed Marking System, all they had to do was sneak a eraser from their jacket pocket when the referee wasn't looking.
Under the 6.0 system, the first skater to perform was highly unlikely to be given perfect marks by any judge worth their salt, no matter who they were, because of base marking and the desire to leave room for the skaters that followed. Though the marks themselves didn't really matter as much as the ordinals, skaters shuddered at drawing the starting position because they believed (often correctly) that twenty skaters later, their efforts would be overshadowed by someone else in the judge's eyes. 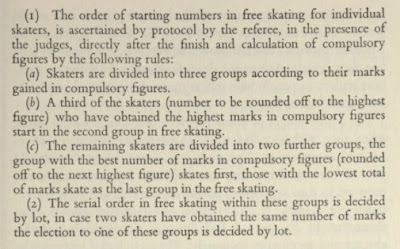 The ISU's rules surrounding starting orders in 1948, reproduced in T.D. Richardson's book "The Complete Figure Skater"
The ISU tinkered with its rules surrounding starting orders in the forties and fifties numerous times in an effort to address the inherent problems, first implementing a system whereby skaters were placed in groups based on results in school figures and compulsory dances, then reverting to a random draw, reinstituting modified seeded draws, then scrapping them again. At the 1972 World Championships in Calgary, a rotating start order was tried for the first time in the ice dance event.  Another interesting first took place at a Canadian-hosted Worlds in 1984, when the organizers in Ottawa used colour computer graphics to illustrate the starting orders for the first time at an ISU Championship. 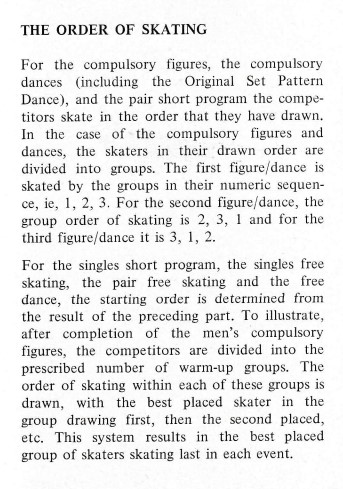 An explanation of how starting orders worked from the program of the 1978 World Championships
The belief that skating first is a death sentence has been disproven a handful of times over the years. The very first time figure skating was included in the Olympic Games in 1908, Ulrich Salchow was the first skater and the eventual winner of the men's event. Tenley Albright and Katarina Witt drew the starting positions in the figures when they won Olympic gold medals in 1956 and 1988. Two-time Olympic Gold Medallists Ludmila and Oleg Protopopov were the first to skate the compulsory connected (short) program at the 1968 Games. 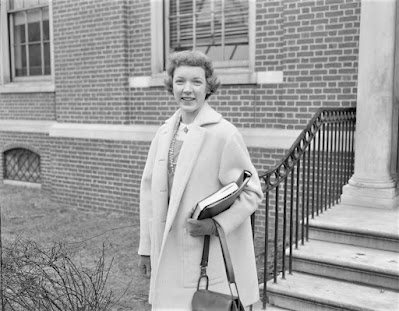 Tenley Albright. Photo courtesy Boston Public Library.r
However, chalking the negative connotation of skating first down to superstition is equally misguided. Earlier skaters have not only been at a psychological disadvantage, but often performed in half-empty arenas. Anyone who has ever skated competitively (or appeared in front of an audience in any capacity, for that matter) can attest to the differences between performing in front of a small, indifferent crowd as opposed to a large, supportive one.
When the IJS system was first being rolled out in 2003, an article in "The Province" claimed:
"OLD: Starting order may have had negative consequences.
NEW: Starting order has no negative consequence.
OLD: Skaters could not win from a lower position without help from another.
NEW: Skaters can win from a lower position after the short program by their own ability."
If this was a goal of the IJS system, it certainly rarely delivered. Under the 6.0 system, there were at least a dozen examples of skaters drawing the starting position and winning gold medals at the World Championships. Since the IJS system was first used at the World Championships in 2005, a grand total of - wait for it! - zero skaters have drawn the starting position in any phase of any competition at the Worlds and won a gold medal.
Various changes and tweaks have been made to the ISU's rules with regard to starting orders during the last two decades. The current rules, which take into account ISU World Standings, make it impossible for skaters with past success to draw early starting orders. They also make it impossible for up-and-coming skaters from developing skating nations to benefit from a later starting position.
In order to gain a better sense of just how much an impact drawing the starting position has had on skaters historically, I started compiling historical data from past Winter Olympics and World Championships from old newspaper clippings, magazine articles and materials housed in libraries and archives. A very special thanks to Karen Cover, the archivist at the World Figure Skating Museum and Hall Of Fame, Frazer Ormondroyd, Dr. Jaochim Bürgschwentner of the Stadtarchiv in Innsbruck, Dr. Matthias Hampe, Sasha Cantet at The Olympic Studies Centre and Carol Stokes, the City Of Calgary's archivist, for their great assistance with this.
This data, though far from complete, shows in black and white how the luck of the draw went from being often inconsequential during the days of closed marking to the hindrance it arguably is today despite a judging system not based on the principle of directly comparing skaters with one another.
OLYMPICS - MEN
OLYMPICS - WOMEN
OLYMPICS - PAIRS
OLYMPICS - ICE DANCE
WORLD CHAMPIONSHIPS - MEN
WORLD CHAMPIONSHIPS - WOMEN
WORLD CHAMPIONSHIPS - PAIRS

Skate Guard is a blog dedicated to preserving the rich, colourful and fascinating history of figure skating. Over ten years, the blog has featured over a thousand free articles covering all aspects of the sport's history, as well as four compelling in-depth features. To read the latest articles, follow the blog on Facebook, Twitter, Pinterest and YouTube. If you enjoy Skate Guard, please show your support for this archive by ordering a copy of figure skating reference books "The Almanac of Canadian Figure Skating", "Technical Merit: A History of Figure Skating Jumps" and "A Bibliography of Figure Skating": https://skateguard1.blogspot.com/p/buy-book.html.