Tricks Of The Trade

As awe inspiring as the triple jumps, flexible spins and fancy footwork of the sport can be, skating would be nowhere without the dangerous and theatrical tricks that pepper not only ISU eligible but professional skating to this day. Imagine a sport without a Detroiter, a backflip or any of the other more "extreme" skating tricks that have elicited "ooo's", "aaa's" and "OH HAYYYYYYYY"'s from audiences for decades? I sure can't. Let's take a minute to look at a few of skating's greatest tricks of the trade: 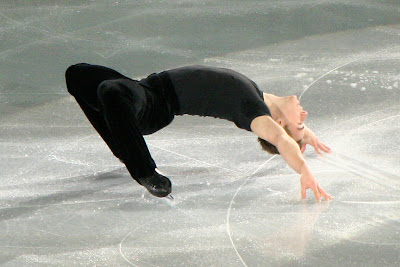 If you don't dance and just pull up your pants, you might be leaning back... and that's how the Cantilever is done. A variation on the spread eagle, a common skating move in the field where skaters glide on both feet, toes turned outward to the sides with heels facing each other, the Cantilever is a thrilling and gravity inspiring skating element with it's historical origins in early show skating.

The Cantilever was invented by Werner Groebli, a Swiss skater who moved to the U.S. in 1937 and joined the cast of Ice Follies as a comedic show skater in 1939. In his long career as a professional figure skater, Groebli estimated he performed more than 12,000 shows before retiring at age 65 after injuring himself while skating in 1980 after an untimely collision with the boards. He performed the "backbend Cantilever" as a signature element with his skating partner. While Frick Cantilevered, Frack would skate in the other direction, hydroblading. The Cantilever can best be described as an element that sees skaters take on an inside spread eagle position and contort their bodies so that they are leaning backwards in a layback position with their head almost touching the ice. Adapted from Groebli ("Mr. Frick")'s comedic routines with Hansruedi Mauch ("Mr. Frack"), the contortionist like trick has been popularized by show skaters and ISU eligible athletes for decades since then, among them Canada's Shawn Sawyer, America's Doug Mattis and Ross Miner, Sweden's Adrian Schultheiss, Russia's Ilia Klimkin and even the Russian pairs team of Lubov Iliushechkina and Nodari Maisuradze, who have incorporated the spectacular and awe inspiring trick as both a solo and pair connecting movement in their programs.

Hydroblading, a term coined by Uschi Keszler, the coach of World Champions Shae-Lynn and Victor Kraatz, who popularized the move is an extension of a deep inside or outside edge with the skater's body stretched in a very low and horizontal position to the ice. The most common version of hydroblading is on a back inside edge, with the skater's free leg crossed behind and the knee deeply bend and extended outside the circle, with the upper body leaning into the circle. I used to love hydroblading when I skated, and would always start by doing a back shoot the duck position then leaning into the edge and coming up in a back spin. It's certainly a dramatic move when performed well and definitely showcases the strength of skater's edges.

Isabelle Brasseur and Lloyd Eisler were 1993 World Champions, and after turning professional, basically wrote the book on dangerous and crowd pleasing adagio pairs tricks, inventing many new adagio moves including the "Fly High, Say Bye", where Lloyd basically tosses Isabelle over his head like a pizza pie, catches and releases her. It's one of many acrobatic tricks that Isabelle and Lloyd invented, many of which have not been performed since or certainly not with the same confidence. 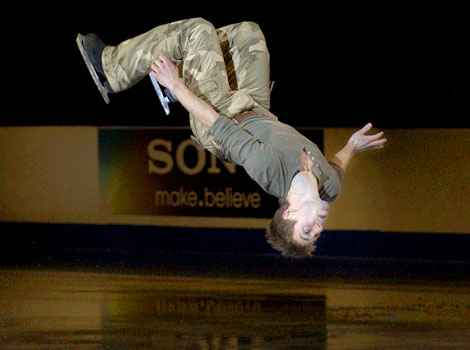 If you want the audience to go beserk, you might want to do a backflip. It is a standard of professional skating, mainly because it was banned from ISU/amateur competition after Terry Kubicka performed it at the 1976 Olympic Winter Games and the association deemed it too dangerous. A backflip is essentially just as it sounds - a reverse somersault in the air. Many skaters have performed it over the years - from Scott Hamilton to Brian Orser to Robin Cousins and Ryan Bradley, among countless, countless others. A smaller group of women have ever successfully attempted this move - Lori Benton, Ashley Clark, Rory Flack Burghart among them. Surya Bonaly lands it both on two feet, and daringly, on one foot and straight into a double or triple Salchow. Now that's just cray cray! Even more cray cray is an adaptation that Michael Weiss performs, where he actually twists in the air while performing this daring move. I don't know how skaters do it, and still think it's the coolest thing ever. Just putting that out there. 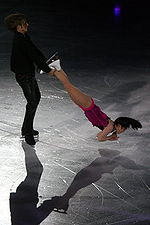 It doesn't get any more dangerous that the headbanger or "bounce spin". Like the backflip, it is considered illegal in ISU/amateur competition. The risky pairs move is performed by the man swinging the lady around with both of her feet off the ice, supported only by the man's grip on her ankle. The lady is elevated and lowered during the spin, often with her head coming shockingly close to skimming the ice. Many professional pairs teams have popularized this move over the years, including Isabelle Brasseur and Lloyd Eisler, Calla Urbanski and Rocky Marval and Anita Hartshorn and Frank Sweiding, who perhaps have the best in the business. It's always met by shocked and audible gasps from any audience that witnesses it.

Show skating wouldn't be what it is without these gravity defying tricks of the trade or the skaters who dazzle the world with them. With so many other ingenius and creative movements and acrobatic feats out there, especially with the popularity of adagio pairs skating and some of the completely outrageous show act skating we see featuring aerial acrobatics, fire eating, barrel rolls and even Gary Beacom and Gia Guddat with skates on their hands, the old saying "everyone has a gimmick" rings true in every good professional figure skater's resume. The fact of the matter is, there's nothing wrong with a gimmick here and there. The goal of show skating is to thrill and entertain an audience, and if you can find a trick to it you're a step above the rest.

Skate Guard is a blog dedicated to preserving the rich, colourful and fascinating history of figure skating and archives hundreds of compelling features and interviews in a searchable format for readers worldwide. Though there never has been nor will there be a charge for access to these resources, you taking the time to 'like' on the blog's Facebook page at http://www.facebook.com/SkateGuard would be so very much appreciated. Already 'liking'? Consider sharing this feature for others via social media. It would make all the difference in the blog reaching a wider audience. Have a question or comment regarding anything you have read here or have a suggestion for a topic related to figure skating history you would like to see covered? I'd love to hear from you! Learn the many ways you can reach out at http://skateguard1.blogspot.ca/p/contact.html.
Posted by Skate Guard Blog at April 28, 2013
Email ThisBlogThis!Share to TwitterShare to FacebookShare to Pinterest
Newer Post Older Post Home