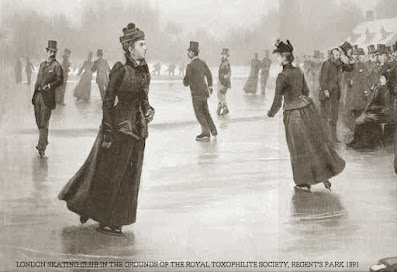 Below, you'll find a comprehensive listing of various honours bestowed upon members of the figure skating community over the years. These tables double as a finding aid. Hyperlinked skater's names will take you to biographies, interviews and #Unearthed features in the Skate Guard archive. This page will be regularly updated as new blogs are published, so if you don't see your favourite skater hyperlinked now, you never know - they may be in the future!

INDUCTEES TO THE WORLD FIGURE SKATING HALL OF FAME

INDUCTEES TO THE SKATE CANADA HALL OF FAME

ORDERS, DECORATIONS AND MEDALS OF THE UNITED KINGDOM AWARDED TO MEMBERS OF THE FIGURE SKATING COMMUNITY
Almost all of the following royal honours were bestowed upon members of the skating community for Services To Ice Skating or Ice Dancing. Prominent members of the skating community who were recipients of these honours for good works unrelated to the sport are marked with asterisks.
*George Herbert Fowler, who served as the National Skating Association's delegate to the ISU and wrote an important early history of skating, was appointed CBE in King George V's 1918 New Year Honours for his work with the Hydrographic Department during the Great War. Novelist Edward Benson, who penned the 1908 book "English Figure Skating - A Guide to the Theory and Practice of Skating in the English Style", was awarded the MBE in 1920 for his support and work for those serving in the Army and Navy that were injured in the Great War. He helped set up Smokes for Wounded Soldiers and Sailors, which sent those in service cigarettes, in 1914. Though a talented skater, Sir Peter Markham Scott was awarded the MBE in 1942 and CBE in 1953 for his courageous service during World War II with the Royal Navy Volunteer Reserve. Scott was a 1936 Olympic Bronze Medallist in sailing and a talented ornithologist, painter and conservationist. Herbert Alward, the bronze medallist at the 1938 European and World Championships, was awarded the MBE for his military service with the Wireless Telegraph Unit unit in Tunisia during World War II. Captain Robert Roy Scott Hewett, British Champion in English Style skating on both ice and rollers, was appointed CBE in Queen Elizabeth II's 1958 New Year Honours for his services to the City of London as an Alderman. Sir Samuel Hoare, 1st Viscount Templewood, was awarded the Knight Grand Cross of the British Empire in June of 1927. He was later appointed Knight Grand Cross of the Star of India (GCSI) in the New Year Honours in 1934. A senior Conservative politician, Sir Hoare served in various posts, including Secretary of State for Air, Home Secretary and Foreign Secretary. He served as the President of the National Skating Association from 1945 to 1948. Major Kenneth Macdonald Beaumont was awarded the CBE in 1949 as the British representative of the legal committee of the International Civil Aviation Organization. Beaumont was a 1920 Olympian, long-time figure skating judge and referee and President of the National Skating Association from 1956 to 1966. Alfred Ronald Gilbey was awarded the CBE in 1962 'for political and public services in London'. Gilbey was a Conservative Member of Parliament who served as the President of the National Skating Association from 1966 to 1976. He was a four-time British figure champion on rollers, the runner-up in the Olympic figure trials on ice in 1932 and a talented speed skater and roller dancer.
INDUCTEES TO THE U.S. FIGURE SKATING HALL OF FAME

*On the fiftieth anniversary of the tragic Sabena Crash that claimed the lives of the entire U.S. figure skating contingent enroute to the 1961 World Championships in Prague, the skaters, officials, coaches and family members who perished were inducted to the U.S. Figure Skating Hall Of Fame as a group. Maribel Vinson Owen and Harold Hartshorne had already been inducted posthumously previously.

INDUCTEES TO THE ICE SKATING AUSTRALIA HALL OF FAME