Midori Ito And Why Adult Skating Makes Me Smile! 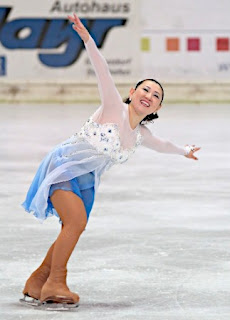 Age is indeed just a number and anyone who thinks otherwise honestly doesn't know what they're talking about. Sorry bout it. It's true.

I was inspired to write this after learning this morning that once again, 1989 World Champion and 1992 Olympic Silver Medallist Midori Ito would be competing at the 2013 ISU Adult Figure Skating Competition in Oberstdorf, Germany. Ito, now 43, will compete against 6 other ladies (from Germany and the U.S.) for the Masters (Elite) Ladies II Free Skating title. Ito, who is a former World Professional Champion as well, shows just how strong her love for the sport is and how her competitive spirit still lives on by making this, her third trip to this competition in recent years, a reality. Her infectious smile and massive jumps (she's still landing double axels and triples) show that without a doubt she still loves being out there. And I know I keep going back to how ridiculous it is there are no professional competitions these days, but here's a good example of a skater who I'm sure would be happy to participate. Hear that, event organizers? But I digress... that's not the story I am here to talk about. I'm here to talk about how inspiring it is to see skaters of ALL AGES getting out on the ice and skating for the JOY of it.

And you might say, hey, look at that hypocrite over there... you used to skate! Why aren't you out there? I'm not saying I won't again at some point in my life. I've competed in "Adult Artistic" once before. It was a completely different experience in that I was actually on the very younger spectrum of the "adult" category at the time and competing against a lady (it was mixed) who was older than me. She was a doll and they ended up putting us in a tie for 1st. What a fun experience it was at the time though. I'd love to get out there and try it again someday, if the time is right. You never know. The thing is, it's not easy at any age to get out there, but there's something absolutely heartwarming about people who aren't sixteen getting out there and giving it one hundred and ten percent. When you're sixteen and you fall ten times in an hour, you get up and fall another ten. When you're thirty six or forty six... or in your seventies like Ludmila and Oleg Protopopov, you fall ten times in an hour, get up, fall another ten and walk around in pain for a week. Hell, I'm thirty and I already have my own version of the bend and snap going on. Trust me, it hurts come spring! It's one thing to keep yourself in great shape for a long time. That's amazing! But for these skaters taking up the sport later in life, or coming back to skating after long absences - I give you a standing ovation. It can't be easy. The thought of jumping honestly terrifies me!

The fact of the matter is that adults are getting out there and skating more than they ever did these days. Although the U.S. established a national adult competition in 1995, it wasn't until 2004 that Skate Canada followed suit. Now, adult competitions are held around the world, with the ISU adult competition Midori Ito is competing in boasting 325 entries from 19 countries between the ages of 28 and 78. 33 of those 325 entries are Canadian, with British Columbia, Alberta, Ontario, Quebec, New Brunswick and even my home province of Nova Scotia being represented. It's a wonderful thing to see!

I have been blessed to not only participate in adult competition, but judge it as well, and one thing I can say is that the skaters participating have SO much fun out there it's unreal. And what that reminds us is that any age (which is only a number) to get out there and have that EXPERIENCE is what anyone who skates or has skated cherishes. So here's not only to Midori Ito, but to adult skaters everywhere who are showing their love of the sport. Thanks for making me smile!

Stay tuned to http://www.facebook.com/SkateGuard and http://skateguard1.blogspot.ca for skater interviews as well as articles, commentary and special features! You can also follow me on the Twitter at http://twitter.com/SkateGuardBlog for skating tweets and whatever else I've got on the go!
Posted by Skate Guard Blog at May 16, 2013
Email ThisBlogThis!Share to TwitterShare to FacebookShare to Pinterest
Newer Post Older Post Home