The Other Olympic Gold Medallists

The roster of Olympic Gold Medallists reads like a who's who of figure skaters who have not only reached the pinnacle of success in their sport but have reached an almost legendary status in pop culture. Names like Dorothy Hamill, Brian Boitano, Kristi Yamaguchi, Katarina Witt, Jayne Torvill and Christopher Dean (among so many others) are not only known within the figure skating worldwide but worldwide even to people who have watched less than 5 minutes of figure skating their entire lives. People know who most Olympic Gold Medallists in figure skating are. However, there have been Olympic Gold Medallists in our sport that even the most avid fans know so little about. They haven't moved onto glamorous careers in broadcasting like Dick Button and Peggy Fleming, Hollywood films like Sonja Henie or modelling magazines like Evan Lysacek. They have, however, left an indelible imprint on the history of the sport and achieved personal goals and incredible heights of success. Let's take a look at 6.0 of the sport's Olympic gold medallists that we might not remember but certainly should never be forgotten: 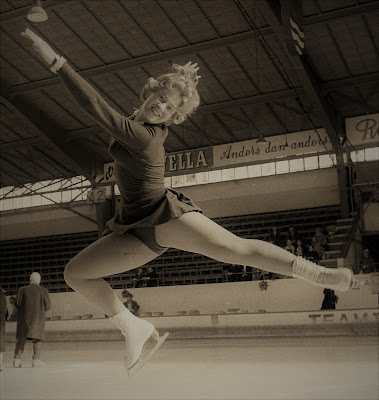 One of the most fascinating parts of researching this article was sitting at a local library, sifting through old magazines on a microfilm scanner and happening upon articles from 1963 and 1964 about 3 time World Champion and 1964 Olympic Gold Medallist Sjoujke Dijkstra. Four years before Peggy Fleming won the 1968 Olympic Gold medal, Dijkstra made history by winning the first gold medal at the Winter Olympics ever for the Netherlands. To this day, she remains Holland's only Olympic gold medallist in figure skating. After winning the 1959 World bronze medal and 1960 Olympic silver medal behind Carol Heiss, Dijkstra's first world title was delayed by the horrific 1961 Brussels plane crash that killed the entire U.S. team and cancelled the 1961 World Championships. She won the following year, a title she defended for the next two years as well. An article from the March 15, 1963 issue of Time Magazine described Dijsktra's win at the 1963 World Championships in Cortina d'Ampezzo, Italy. Her performance at that event to Johann Strauss' "Graduation Ball" featured a huge double Axel, flying camel spins, flying sit spins and double toe loops: "The music leaped and the girl leaped too - a twirling double Axel that sent her hurdling through the air until she glided back on the ice." At 5'6" and 140 lbs, she was a more full figured woman than many skaters today. Sjoujke was an athletic skater who excelled at both figures and free skating. By the time of the 1964 Olympic Games, her skating was so popular in Holland that Queen Juliana of the Netherlands travelled to Austria to watch her compete. Delivering by all accounts the finest performance of her career, she won the first Olympic gold medal for her country since Fanny Blankers-Koen took 4 medals in women's track and field some time previous. Dick Button described Dijkstra as "tremendous. She has the strength of a man. She is probably the most powerful woman skater who ever existed". Not a flashy skater, Sjoukie was not afraid of a little hard work, stating "it's just working hard that makes you good." And work hard she did. On the road to her Olympic glory, she trained 6 hours a day, 5 days a week, 7 months a year. Her father was an Amsterdam doctor named Lou Dijkstra, a former speed skater who competed at the 1936 Winter Olympics. Early in her career, she broke a leg skating but persevered. By 10, she was training with Arnold Gerschwiler in Richmond, London. 2 years later she placed 14th at the European Figure Skating Championships. At age 13, she gave up formal schooling and with more time to focus on her skating, moved up in the ranks steadily under she achieved an Olympic dream. An article in a Dutch magazine pointed out another startling fact I had not previously been aware of - after compulsory figures at the World Championships in 1964, she was 59 points ahead of her closest rivals yet still delivered "a dazzling performance". She turned professional after winning her last World title and toured with Holiday On Ice from 1964 to 1972. In 1985, she became the figure skating advisor to the Dutch Skating Federation. She has done commentary for Dutch television and is a judge on the Dutch version of Dancing On Ice. She was inducted to the World Figure Skating Hall Of Fame this year.

Described by British sports journalist Howard Bass as having free skating that was "embarrassingly substandard", Schuba won the 1972 Olympic gold medal after achieving such a lead in compulsory 'school' figures that even with a 9th place finish in free skating, she still comfortably won ahead of excellent free skaters Karen Magnussen of Canada and Janet Lynn of the U.S. At the time of Schuba's win, compulsory figures accounted for 60% of the total score. A brilliant specialist in this area, her win sparked a controversy that led to the introduction of the short program to competition and the value of compulsory figures decreasing slowly over time until they were finally last skated at the Olympics in 1988. First winning a world silver medal in 1969, Schuba went on to duplicate that silver medal in 1970 and win the World Championships again in 1971 and 1972, in addition to her 1972 Olympic win in Sapporo, Japan. Schuba was no secret to hard work, taking over the bookkeeping of her family's Vienna lumber business after her father died when she was 13, while balancing school and skating at the same time. Following her Olympic win, she toured with Ice Follies and Holiday On Ice before beginning a career in the insurance field which she continues to this day. She is also a former president of the Austrian Ice Skating Association (the first woman to hold that position) and has been a formidable organizer and supporter of figure skating, Olympic and Paralympic athletes in her country. Coming out of nowhere to win the world title in 1951, Ria Baran and Paul Falk (who would later simply be known as The Falk's after marrying), were the first skaters from East or West Germany since World War II to win a world title. Strong technically with an elegant style, The Falk's had an extremely short career that culminated in a second world title and the Olympic gold medal in 1952, ahead of Karol and Peter Kennedy of the U.S. and Hungary's Marianna and Laszlo Nagy. Following their undefeated amateur record and Olympic win, they pursued a brief professional career with Holiday On Ice. Suggested to be the first team to perform side-by-side double jumps in competition and the inventors of the lasso lift, The Falk's were also world roller skating champions! After ending their professional career, Ria Falk worked as a secretary before her death in 1986 at age sixty three. Paul Falk is still alive and well, and enjoyed a long career as a precision mechanic after hanging up his skates. He keeps active to this day by playing golf and resides in Germany. 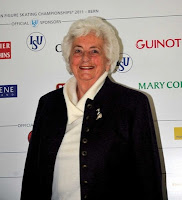 The winner of the ladies title in 1952 was Great Britain's Jeannette Altwegg, a proficient skater who almost didn't end up involved in the sport seriously at all. In her teens, Altwegg made a difficult decision between tennis and skating after losing the junior finals at Wimbledon in 1946 by a narrow margin. The very next year, she was Britain's junior ladies champion. Coached by the legendary Swiss coach Jacques Gerschwiler, she was a strong compulsory figure skater than free skater thanks to Gerschwiler's expert instruction. Following up a 1948 Olympic bronze medal with the 1951 European and world titles, the then 21 year old Altwegg managed a win over free skating whizzes Tenley Albright and Jacqueline du Bief owing to her lead in that portion of the 1952 Oslo competition. Altwegg has lived a fascinating life, being born in India to a Swiss father and then being raised in Lancashire, England. After her Olympic win, Altwegg decided to forgo the nomadic travelling ice show life and opted to spend many years working with underprivileged children at the Pestalozzi Children's Village in Switzerland, where she met the father of her children. Her daughter grew up to up to be a World Champion curler, representing Switzerland. Now 82, Altwegg is a mother of and grandmother of 13. "My family has been and is my career" said Altwegg in a 2011 interview. Her and Madge Syers, the 1908 Olympic ladies champion, remain Britain's only Olympic ladies gold medallists to this day. 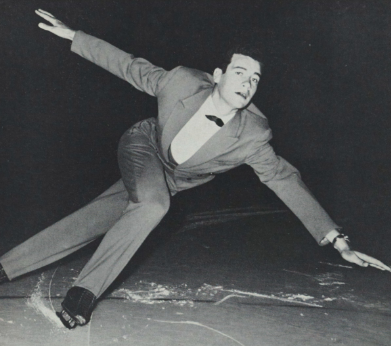 With a short career that ended as quickly as it started, 19 year old Manfred Schnelldorfer of Germany made a splash in 1963, when he won the bronze medal at the World Championships behind Canada's Donald McPherson and France's Alain Calmat. The following year, the elegant skater surprised everyone by winning the 1964 Olympic title ahead of Calmat and 14 year old Karol Divin. A former architecture student, Schnelldorfer has lived a fascinating live since his surprise Olympic win. He skated in professional ice shows, acted, had a pop music career, coached figure skating and acted as a sports teacher. Like The Falk's mentioned earlier, Schnelldorfer was also a champion roller skater as well. Now a married father, Schnelldorfer lives in Munich, Germany and is a business owner.


With 8 national titles, 5 European titles and 3 World titles to his credit, it was no surprise when Czechoslovakia's Ondrej Nepela brought home the gold medal at the 1972 Winter Olympics in Sapporo, Japan. His career featured 3 trips to the Olympics (his first in 1964 at the age of 13) and ended in 1973 with a final world title in his home town of Bratislava, in what is now Slovakia. The first and only men's skater to this day to win a World title in figure skating, the very handsome Nepela was a figures specialist but not a one sided one whatsoever. Although he had a small frame, he was a brilliant free skater too. He had great height and consistency on his jumps and was well known for being calm and collected in the heat of any competition. He turned professional in 1973, touring for 13 years as a principal soloist with Holiday On Ice then began a coaching career in Germany, coaching Claudia Leistner to her European title in 1989. That same year, he lost his battle with AIDS at the age of 38. To this day, this beautiful skater is remembered in his home country with a memorial competition - the Ondrej Nepela Memorial. Previous winners include Michael Shmerkin, Stephane Lambiel, Carolina Kostner, Julia Sebestyen, Aliona Savchenko and Robin Szolkowy and Marina Anisinna and Gwendal Peizerat. Nepela's skating was underrated and his life short lived but the legacy he has left for both his country and the sport, through this memorial event, is an everlasting one.

Skate Guard is a blog dedicated to preserving the rich, colourful and fascinating history of figure skating and archives hundreds of compelling features and interviews in a searchable format for readers worldwide. Though there never has been nor will there be a charge for access to these resources, you taking the time to 'like' on the blog's Facebook page at http://www.facebook.com/SkateGuard would be so very much appreciated. Already 'liking'? Consider sharing this feature for others via social media. It would make all the difference in the blog reaching a wider audience. Have a question or comment regarding anything you have read here or have a suggestion for a topic related to figure skating history you would like to see covered? I'd love to hear from you! Learn the many ways you can reach out at http://skateguard1.blogspot.ca/p/contact.html.
Posted by Skate Guard Blog at May 09, 2013
Email ThisBlogThis!Share to TwitterShare to FacebookShare to Pinterest
Newer Post Older Post Home