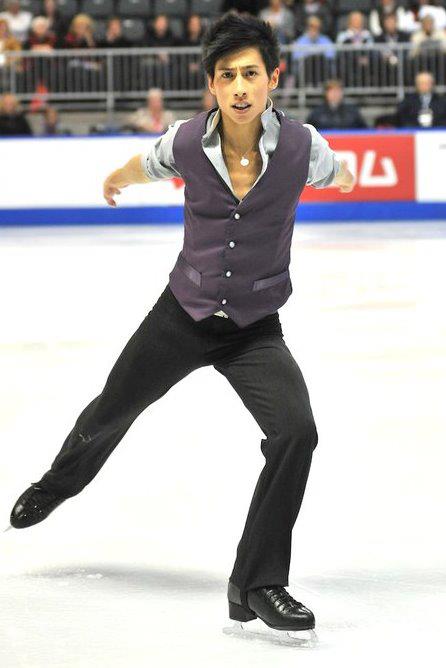 After winning the Canadian Junior title in 2007, a mere two years later British Columbia's Jeremy Ten was on the senior podium and off to his first Four Continents and World Championships competitions, where he placed 7th and 17th respectively. Injuries and issues with inconsistency have plagued him throughout his career, but after missing most of the 2010/2011 season due to injury, Ten rebounded to win the bronze medal at the 2012 Canadian Figure Skating Championships. He finished 8th in a very deep field last year that included Patrick Chan, Emanuel Sandhu, Kevin Reynolds, Elladj Balde, Andrei Rogozine and many other strong skaters. He hopes to once again be on the podium this season, a trip to Sochi his ultimate goal. With beautiful sensitivity and interpretation of his music, strong spins and high flying jumps, Jeremy Ten is a skater not to count out. We talked about the challenges in his career, homophobia in the sport, new programs, his role models and much, much more:

Q: Having won medals on the novice, junior and senior levels at Canadian Nationals, you've proven that you can achieve consistency in your skating. What has been the biggest challenge for you along the way in your skating career?

A: Actually, the biggest challenge for me so far in my skating career has been consistency. My career has had many ups and downs, a rollercoaster if you will; therefore my confidence has definitely taken some hard hits over the past few seasons. Another big challenge has been staying healthy, especially after my surgery and stress fracture and not letting setbacks like those overrun my career and also diminish my confidence.

Q: You have worked with some of the best and brightest in the sport including Joanne McLeod, Victor Kraatz, David Wilson and Jeffrey Buttle. What can you tell us about the coaches and choreographers that have influenced your skating career most?

A: No one knows my skating better than my coach of 10 years Joanne McLeod and am so fortunate to have her in my corner along with her amazing team which includes Neil Wilson. I’ve been so blessed to have worked with so many amazing and talented individuals each contributing something different and positive to my skating and approach. Victor taught me how to talk to the ice with my blades, David and Jeff taught me how to listen to music and to let my body be a vehicle for interpretation, and Megan Wing and Aaron Lowe have taught me how to refine my skating by paying attention to every single detail. Most recently I had the opportunity to work with Rafael Artunyan in Lake Arrowhead and he has given me a new found confidence and perspective to my skating.

Q: If you hadn't have been a figure skater, what other talent do you think you would have pursued this far in your life?

A: I have always loved to dance and have always said that if I wasn’t a figure skater I would have loved to have been a dancer - contemporary or lyrical. Having competed at the World Championships, Four Continents Championships, Grand Prix events and many other international competitions, what can you say is your favorite or most memorable experience from international competition? The one moment that stands out to me thus far has to be competing at my first Four Continents Championships in 2009 at home in Vancouver. I skated one of the best programs I’ve ever skated and brought the entire crowd to their feet. It was so loud I could barely hear my music at the end and my entire family was there to share the moment with me.

Q: You have fought hard to rebound from injury the last couple seasons. How are you doing now and how has training and jumping been going for you?

A: It’s been a slow and arduous process to say the least but I feel like I’m finally starting to feel like my old self again. I still have to monitor my ankles and make sure I’m not overstressing them which means seeing my physiotherapist if there is even the slightest bit of discomfort. Even if things are going well I seek treatment once or twice a just to make sure everything is moving and working the way they should be. A year ago I switched personal trainers and am now working with Jeff Cathrea at the Performance Institute new who is wonderful at communicating with my physiotherapist so the three of us together have been working very hard to strengthen and increase the mobility of my ankles. They’ve helped immensely in keeping me injury free and getting my body into the shape that it was in prior to all my health setbacks. It was really hard mentally at first, especially going into lutz and flip jumps and although it may have taken over a year since my surgery, they’re back to normal and as strong as they used to be if not stronger. I also started landing quad toes which I never thought I would be learning/doing at the age of 24 but when there’s a will, there’s a way.

Q: What are your ultimate goals and new programs for this season?

A: I would love to get back onto the international scene and get back on the podium at nationals with the ultimate goal of representing Canada at the 2014 Olympic Games. My new short program is “Dance With Me Wallis” from the W.E Soundtrack by Abel Korziniowski. My free skate is “Variations” by Andrew Lloyd Webber.

Q: Who is your role model, and why?

A: As cliché as it sounds, my role model would have to be my parents. They’ve sacrificed so much and they have worked so hard their entire lives in order to let me do what I love and to do and have a chance at making my dreams come true.  Without them I wouldn’t be where I am today and I am so thankful.

A: I love tattoos. Like it’s almost an obsession.

Q: Who are three figure skaters or teams (past or present) you could sit and watch perform all day?

Q: In response to Skate Canada's 2009 campaign to make figure skating more "masculine", Elvis Stojko told the Toronto Sun "if you're very lyrical and you're really feminine and soft, well, that's not men's skating." What are your thoughts on this and the ideas of homophobia and stereotypes in skating?

A: I think everyone is entitled to their opinion and has their own views on what skating should be and shouldn't be. I know what kind of skater I am and what I want to portray to the audience and I also know not everyone is going to like what I do and I'm okay with that.  Skating is a very difficult sport that requires the utmost strength, determination, and focus with a dash of elegance, sophistication and fearlessness. Unfortunately not everyone can see that past the glitter and rhinestones.With that said,  I don't think homophobia within the sport is really an issue however I do think that stereotyping from those on the outside looking in is still very prominent within our society and overshadows all the great qualities our sport has to offer. I for one think it’s great that we have skaters like Johnny Weir being themselves and being great advocates for young teens who need that kind of a role model to help them be comfortable and proud in their own skin. While on the other side of the spectrum we have skaters like Patrick Chan and Brian Joubert who offer a completely different side and look to skating that others can relate to and that's what makes our sport so wonderful: it's diverse and it's accepting.

Q: Is skating professionally something you would like to do in the future or do you have a different career path in mind after you finish your "amateur" career?

A: It would really depend on what opportunities opened up for me once my 'amateur' career is over. I would love to do some ice shows if the opportunity is there and after that dabble in some choreography. I don’t think I’d like to coach full-time but in some way I do want to stay involved in the sport as much as I can. Currently, I’m finished my minor in Kinesiology and working on a B.A. in Health Sciences at Simon Fraser University.

A: I love everything there really is about skating. I love to spin, I love to jump and I love to fly around the ice.

If you enjoyed the interview with Jeremy, stay tuned to http://www.facebook.com/SkateGuard and http://skateguard1.blogspot.ca for more skater interviews as well as articles, skating history, commentary and special features! You can also follow me on the Twitter at http://twitter.com/SkateGuardBlog for skating tweets and whatever else I'm rambling on about.
Posted by Skate Guard Blog at July 31, 2013
Email ThisBlogThis!Share to TwitterShare to FacebookShare to Pinterest
Newer Post Older Post Home
"As a rule an author has one or two popular ways of contrasting the past with the present. He can treat the past as lying in comparative doleful ignorance, or he can explain that the past was infinitely superior to the day we live in. Of course, either method is the popular journalism of the moment, and in reality there is no sharp contrast, but a gradual transition which leads the past into the present." - Joel B. Liberman, Skating Club Of New York