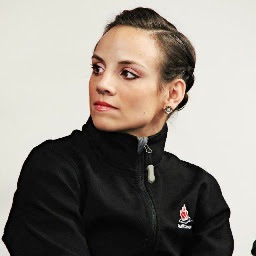 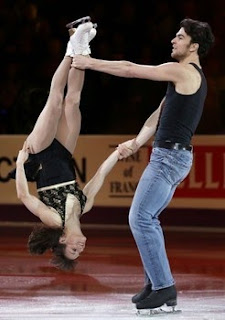 To clear something up right off the bat, I get excited about each and every interview I do. I wouldn't reach out to a skater, choreographer, judge, historian or fan if I didn't feel they had something to contribute: a story to tell or just something special in general. Since I started this blog, I've been lucky enough to interview some of my idols - skaters like Tai Babilonia and Randy Gardner, Anita Hartshorn, Rory Flack Burghart and many, many more. I honestly can't even get over it. My surprise grew when 2013 Canadian National Champion Meagan Duhamel agreed to do an interview! Meagan, with her partner Eric Radford, is the current reigning World bronze medallist and a serious threat not only for a medal in Sochi in the pairs competition, but a gold medal at that. Meagan and Eric are honestly a cut above any team in the world right now technically, with difficult lifts, consistent side by side AND throw triple lutzes, good choreography, speed and passion. Meagan comes from a background in singles skating, having won the Canadian junior national title in 2003 and competed 7 times at the Canadian National Championships as a singles skater on the novice, junior and senior levels. Her first pairing earned her a win at the Golden Spin Of Zagreb competition with partner Ryan Arnold and a trip to the Junior World Championships. In 2007, with partner Craig Buntin she won her first of 6 medals at the Canadian National Championships in senior pairs and her first of 5 trips to the World Figure Skating Championships and Four Continents Championships. When she teamed up with Eric Radford in 2010, the success was fast and furious. They have finished in the top ten in the World Championships the past 3 years and in winning bronze this year at the World Championships in London, Ontario, were only 1 point behind the reigning Olympic medallists Aliona Savchenko and Robin Szolkowy of Germany, actually beating them in the free skate. Make no mistake, Meagan and Eric are one of the teams to beat in Sochi! It was my absolute pleasure to ask Meagan about her accomplishments to date, first tour with Stars On Ice, new programs and much more. Grab yourself a cup of tea or coffee - this is a great read!

Q: Having competed in 5 World Championships with 2 different partners as well as making 5 trips to the Four Continents Figure Skating Championships and winning the Canadian national title three times (twice as a pairs skater and the junior ladies title in 2003), what is your proudest accomplishment when it comes to your competitive career?

A: First of all, you just reminded me how lucky I am to have achieved so much with my skating! I have a few moments that I am very proud of. Number one would be when Eric and I won our first national title in 2012. We both took the longest route possible towards that moment and when we finished our long program in Moncton that year we were overwhelmed with emotion. I will never forget that night; it really changed our lives. Coming a distant second to that moment was in 2008 when I made my first world team with Craig Buntin. I will always remember running in the stands to see my parents and crying with them. We had done it together and I knew how special it was for them.

Q: What direction are you and Eric going in program wise next year? What can we expect?

A: Eric and I have two great programs choreographed for the upcoming year. Our short is set to music that Eric composed. He had an orchestra do it this spring and it turned out great. We are using this program as a tribute to all those who have helped us along our journey to the Olympics. Our long is to music from "Alice In Wonderland" by Danny Elfman. It is a very different program for us. It's a very theatrical program and we are trying to show the world a different side to our skating, as well as play to our strengths as a team.

Q: What is your ultimate goal in Sochi and what do you think it's going to take to get on that podium?

A: Our ultimate goal is to stand on the podium in Sochi and push the Russians for the gold. We understand everything that this involves. Eric and I recognize our weaknesses as a team and we are working on minimizing those and maximizing our strengths. Like usual, we have been very clever about our base values, making sure they are higher then anyone else. We have added the reverse lasso into our program, giving us a higher base value then last season. We have also been working on all the little details, like flow, polish, speed and unison, to give our component scores another push.

Q: This was your first year touring with Stars On Ice. I was front row center in Halifax and you guys were fantastic! What was the touring experience like and where did you come up with the idea for Artists Against Bullying's "True Colors"?

A: We had a blast touring with Stars On Ice! We loved every minute of it. Performing every night definitely helped our skating and performance abilities. As far as the "True Colors" program, we had a hard time finding the right music for the tour. Eric and I have our comfort zone and our choreographer Julie Marcotte is always trying to get us out of it! I found the music because I heard it on the radio. It was a cool remix and I felt really connected with the song. Eric and I share a similar taste in music so I was sure he'd like it as well. And then Julie presented us with the idea of using a prop and we came up with the scarf idea! We were so nervous that night in Halifax, wondering if we'd drop the scarf or get it stuck on one of us. Luckily that didn't happen and we were overwhelmed to get a standing ovation at our first show in Halifax.

Q: What are your long term plans and how long do you hope to be competing as an eligible skater?

A: Eric and I have a plan until Worlds 2014. After that, we will reassess our career and decide what to do. We have only been together for 3 years now. We are still young compared to some of our competitors so we feel we can keep competing for a few years, as long as our bodies allow it! Why not? We are living our dream and love what we do.

Q: You and Eric skated earlier this year in the FABULOUS Liz Manley's show, a fundraiser for DIFD and Youth Services Bureau of Ottawa and teen mental health. Why is this issue so important to you and right now in general?

A: We felt so honored when Liz Manley invited us to take part in her ice show for mental health. We feel like mental health is a bit of a taboo subject and it needs more recognition. People need to know and speak up about it. No one, teenagers or adults, should have to suffer alone. We hope Liz will do the show again and we can raise more awareness.

Q: Who are your favourite skaters of all time? Who is one skater or person involved in the sport you've never met but would love to?

A: My favourite skaters of all time - that's a long list! Tara Lipinski, Michelle Kwan and Irina Slutskaya were my idols as I grew up. I watched Tara's 1998 Olympic long program every single day for years. I know all the commentating and choreography by heart! I also did the same thing for Sarah Hughes 2002 Olympic long program! Xue Shen and Hongbo Zhao are also big idols to me. They overcame so many hurdles and skated with so much passion but what I admire most about them is the fact that every single year, they came out better then the previous year. They listened to their critics, stayed positive and worked hard on their weaknesses. True heroes in my eyes.

A: Good question! Well, I am a Vegan. I think lots of people know that though. I am also a Certified Holistic Nutritionist and hope to work in that field with young skaters in the future. I love animals and adopted a dog from the SPCA in 2009. He was 12 years old when I got him. I also have a cat, Zara. I play on a mixed baseball team in the spring and summer with my boyfriend and Eric and I played on a dodgeball team this winter. Also, I am a huge figure skating fan - literally a fan. I love to follow the sport and certain skaters. (I realize That probably makes me sound a little weird... hahaha)

Q: What is your favourite quote?

A: I love so many quotes! My favourite is "when the going gets tough the tough get going" and "great moments are born from great opportunity".

Q: What keeps you loving the sport every day?

A: I truly do love skating. There's nothing I would rather do. I love the challenge of pushing myself to the limit and seeing how far I can go. I love the feeling of accomplishment after achieving a new goal. I love performing for a crowd. I love the feeling of flying! And I love everything that skating has given me. Life long friendships, goals and dreams, the opportunity to travel the world, and life lessons about dedication and hard work.

Skate Guard is a blog dedicated to preserving the rich, colourful and fascinating history of figure skating and archives hundreds of compelling features and interviews in a searchable format for readers worldwide. Though there never has been nor will there be a charge for access to these resources, you taking the time to 'like' on the blog's Facebook page at http://www.facebook.com/SkateGuard would be so very much appreciated. Already 'liking'? Consider sharing this feature for others via social media. It would make all the difference in the blog reaching a wider audience. Have a question or comment regarding anything you have read here or have a suggestion for a topic related to figure skating history you would like to see covered? I'd love to hear from you! Learn the many ways you can reach out at http://skateguard1.blogspot.ca/p/contact.html.
Posted by Skate Guard Blog at July 01, 2013
Email ThisBlogThis!Share to TwitterShare to FacebookShare to Pinterest
Newer Post Older Post Home
"As a rule an author has one or two popular ways of contrasting the past with the present. He can treat the past as lying in comparative doleful ignorance, or he can explain that the past was infinitely superior to the day we live in. Of course, either method is the popular journalism of the moment, and in reality there is no sharp contrast, but a gradual transition which leads the past into the present." - Joel B. Liberman, Skating Club Of New York