The Other Olympic Gold Medallists, Part 3

One of the most fascinating aspects of figure skating is its rich and complex history, layered with stories of triumph against diversity, personal sacrifice, judging scandals and record breaking "firsts". I am and always have been a huge believer that every skater, judge, coach and fan that has ever become involved in the sport has added something to its history that can never be taken away. It's all part of an intricate web. Earlier this year I spent an afternoon in a library with a microfilm scanner, a stack of dusty reference books and a mission: to tell the stories of the Olympic gold medallists in figure skating that we know little about. I wrote part 1 and part 2 to an article called "The Other Olympic Gold Medallists", which was really well received by a lot of you and got to thinking... you know what girl? Let's talk about some more of these great champions who won Olympic gold... and not the ones we already know the stories of, the other ones whose stories we don't but SHOULD know. Without further ado, 6.0 more stories of The Other Olympic Gold Medallists:

Only one of three skaters in history to win 3 Olympic gold medals in figure skating, Irina Rodnina is a pairs skating LEGEND. Interestingly enough, she's also the only skater other than Artur Dmitriev to win Olympic gold medals in pairs skating with more than one partner - and she was the first to do that as well. The story of her first partner, however, is a fascinating one. Alexei Nikolaevich Ulanov won four world titles and an Olympic silver medal with Rodnina for the Soviet Union but what happened after his Olympic win was something straight out of General Hospital. Ulanov was a famous womanizer. While still competing with Rodnina, he was caught in a hotel room with his biggest competition, Lyudmila Smirnova, who with partner Andrei Suraikan had won the silver medal at the Sapporo 1972 Olympics. A law in Japan prohibits a man and a woman who are not related to be in the same hotel room, and expulsion from the country and international scandal were only squashed by an assurance to Japanese officials that Ulanov and Smirnova would marry right after the 1972 Olympics. After winning Olympic gold, not only did he part ways with Rodnina, but he also married and teamed up on the ice with Smirnova and was back the next year to compete against his former partner and HER new partner Alexander Zaitsev. His partnership with Smirnova didn't ultimately last on or off the ice. He competed with Smirnova at the 1973 and 1974 European and World Championships, winning medals but not defeating his former partner. Ulanov and Smirnova did have two children together but divorced. His daughter, Irina Ulanova used to skate with Maxim Trankov, who's one of the main contenders for Olympic Gold in Sochi. Ulanov moved to the U.S. in 1995 and is currently living and coaching in South Florida. 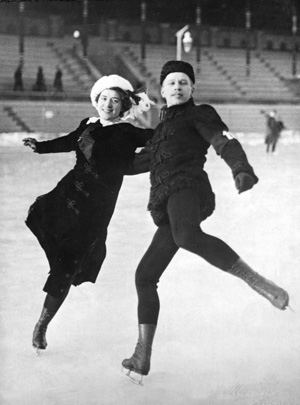 In today's figure skating world, country swapping is the norm as skaters are always looking to take advantage of family and other connections, often to get a leg up. After all, if you live in a country like the U.S., Canada, Japan or Russia, your chances of making a world team are a lot less than representing, say, Uzbekistan. Changing countries was not however the norm in the 1920's, but the husband and wife team of Ludovika and Walter Jakobsson came together to do just that. Ludovika Eilers was born in Potsdam, Germany in 1884 and began her career as a singles skater, winning a bronze medal at the World Championships in 1911 representing Germany. The same year, she married her Finnish skating partner Walter Jakobsson. The Jakobssons won Olympic Gold at the 1920 Winter Olympics in Antwerp, where Ludovika was the only German born athlete at the Games. They continued to compete after their Olympic win, winning a third World title in 1923 and a silver medal at the 1924 Winter Olympics as well. Jakobsson was an engineer by trade and also an amateur photographer and member of the Fotografiamatörklubben i Helsingfors ("Helsinki Amateur Photography Club"). His speciality was dark city scenes with special light effects like rain or mist. Walter passed away at age seventy five in 1957 and was survived by his wife Ludovika, who passed away in 1968 at age eighty four. Both lived in Helsinki until their deaths. 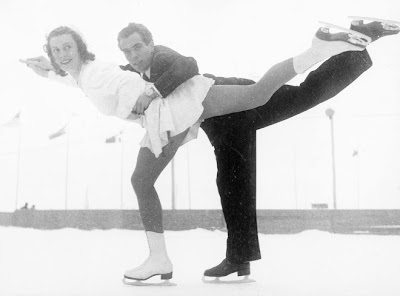 After winning the European and World Championships in 1947 (the European Championships that year being the first international competition after World War II), Belgium's Micheline Lannoy and Pierre Baugniet appeared at the 1948 Winter Olympic Games and made history by winning the first Winter Olympic gold medal in history for their country. They retired from their two year career never having lost a competition. Following their win, Lannoy later emigrated to Canada where she married and lived for the rest of her life. Baugniet passed away in 1981 in his early fifties. 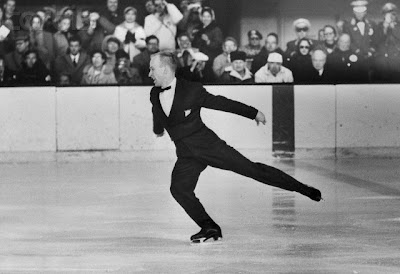 21 years before Vern Taylor landed the first triple axel in competition, David Jenkins, the younger brother of Hayes Alan Jenkins was "landing them like nobody's business". I totally felt like Dick Button saying that! "Good for you, Lucinda Ruh"... Anyway, back to what I'm saying... David Jenkins was not only a very strong jumper but a very good all around skater like his brother. Picking right up where Hayes left off, he won 3 World Championships from 1957 to 1959 and then returned to the winter Olympics to win gold in 1960, following up his bronze win in 1956. He turned professional following his 1960 win, taking a leave of absence from his studies at Case Western Reserve Medical School to appear in the Ice Follies tour. David Jenkins is now seventy seven and a retired gastroenterologist living in Tulsa, Oklahoma. In a 2010 interview on the anniversary of David's Olympic win, his older brother Hayes said "David won the Olympics while he was in medical school [at Western Reserve], and that accomplishment has never gotten the attention it deserved. I could not have competed and gone to law school at the same time, and I couldn't see how he could do it, but he did." 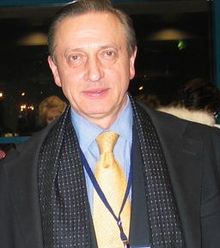 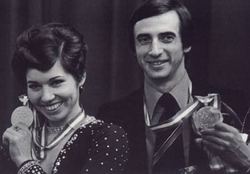 In an interview with Barbara Berezowski earlier this year, she talked about being the first ice dance team to compete in the Winter Olympics. Barbara's accomplishments not to be overlooked, her biggest competition at those Innsbruck Games were the Soviet pair of Pakhomova and Gorshkov. First competing together at the European and World Championships in 1967, Lyudmila and Alexandr quickly rose to the upper echelons of ice dance, reigning supreme at the World Championships in 6 out of their 9 appearances. Not long into their partnership, a budding relationship developed between the two. He proposed marriage and she said she'd only marry him if they became World Champions. The team performed in the ice dancing demonstration at the 1968 Winter Olympics in Grenoble, won their first World title in 1970 and married later that year, keeping with Lyudmila's promise. Following their win at the 1975 Europeans, Gorshkov underwent a lung operation with their coach Elena Tchaikovskayadonating blood. They flew to the 1975 World Championships but during the first practice session, Gorshkov had trouble breathing and needed to be given oxygen. The team withdrew and rumors in the Soviet Union circulated that Gorshkov had died on the flight back. Still very much alive, they returned the next season to win Olympic and World gold. They retired from competition, having a daughter in 1977. Pakhomova began coaching in Soviet Russia, her former students including Igor Shpilband and Natalia Annenko and Genrikh Sretenski. In 1979, Pakhomova's health problems began and she was eventually diagnosed with leukemia. She continued to get out on the ice despite her illness and passed away at age 39 on May 17, 1986 in Moscow. Following Pakhomova's death, Gorshkov later served as the chairman of the ISU's Ice Dance Technical Committee. In June 2010, he was elected president of the Russian Figure Skating Federation. He later remarried to Irina Ivanovna Gorshkova.

Like Ludowika Jakobsson who was mentioned earlier, Herma Planck-Szabo found success as both a pairs and singles skater, winning 2 World titles in pairs with partner Ludwig Wrede and 5 in singles skating. The Viennese skating sensation came from  a family of figure skaters. Her mother, Christa von Szabo, was a two time medallist in pairs skating at the World Championships and her uncle Eduard Engelmann Jr. was a three time European Champion in singles skating who built the first artifical ice rink. Her cousins were Engelmann's daughter Helene Engelmann, who won the 1924 Olympic pairs title and Christine Engelmann, who married two time Olympic Gold Medallist Karl Schäfer. Talk about keeping it in the family girl! According to German skating historian Matthias Hampe, she was the first skater to be systematically trained at such a young age. She was two when she began skating. In addition to winning her seven World titles, she won the gold medal in singles skating at the 1924 Winter Olympics, making her the first lady to win gold in the Winter Olympic Games (Madge Syers had won the first ladies figure skating Olympic title... at the Summer Olympics in 1908). At those Olympics, Planck-Szabo helped modernize ladies skating by wearing a skirt cut above the knee first, before Sonja Henie later popularized the idea. After being undefeated for five years straight at Worlds, she retired in 1927 after being beaten by Sonja Henie. The result, at any rate, was suspicious as the panel of judges consisted of three Norwegians, one German and one Austrian. The Norweigan judges all voted for Henie. The previous year, Szabo had issues as well. Her good friend and former competitor Fritzi Burger said in a 1994 interview that "she was putting on her skates and she noticed that someone had cut around the boot; the sole was nearly coming off. They postponed the beginning of compulsory figures until the boot could be repaired." Szabo had her suspicions. She thought she saw a member of the Norwegian delegation in the hall as she returned to her hotel room the night before the competition but nothing was ever proved. These experiences left Szabo disillusioned with skating (rightfully so) and sadly she never skated again. She died at age eighty four in Rottenmann, on the border of Austria and Slovenia.


Skate Guard is a blog dedicated to preserving the rich, colourful and fascinating history of figure skating and archives hundreds of compelling features and interviews in a searchable format for readers worldwide. Though there never has been nor will there be a charge for access to these resources, you taking the time to 'like' on the blog's Facebook page at http://www.facebook.com/SkateGuard would be so very much appreciated. Already 'liking'? Consider sharing this feature for others via social media. It would make all the difference in the blog reaching a wider audience. Have a question or comment regarding anything you have read here or have a suggestion for a topic related to figure skating history you would like to see covered? I'd love to hear from you! Learn the many ways you can reach out at http://skateguard1.blogspot.ca/p/contact.html.
Posted by Skate Guard Blog at August 14, 2013
Email ThisBlogThis!Share to TwitterShare to FacebookShare to Pinterest
Newer Post Older Post Home