Isabelle And Paul Duchesnay's The Planets 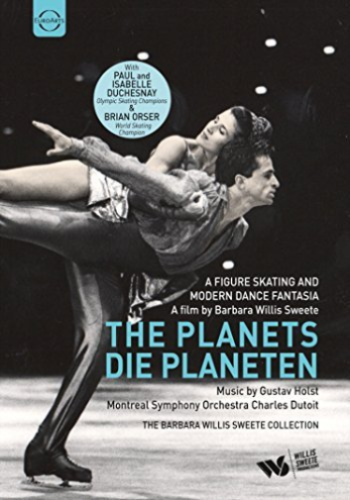 "Long ago, on a dark icy planet, the Gods gathered under Jupiter's watchful eye to create two perfect creatures. Having conjured the new beings from out of the ocean depths, the Gods then guided them on a breathtaking journey to maturity." The Planets with Isabelle and Paul Duchesnay was a tour de force and really a revolutionary piece of performance art when it was released by Rhombus Video in the mid 1990's and truly a collaboration that stands the test of time. Uniquely combining solo and ensemble skating, dance, underwater photography and imagery, The Planets created a new world combining imagination, skating, dance, mythology, theatre and the music of Gustav Holst (performed by the Montreal Symphony Orchestra) in a way that was truly remarkable and breathtaking.


Although the Duchesnays (who I just love) were the stars of this production, the skating cast also included 1987 World Champion Brian Orser. Dance was fused with skating, with dance performances by the Toronto Dance Theatre, Sonia Rodriguez, Learie McNicolls and Charles Kirby complementing the exquisite dancing on ice and underwater work in the setting of Mount Olympus. The performances were presented as entertainment to The Gods.


Choreography for The Planets was done by the gifted Lar Lubovitch, who studied at Juilliard under dance greats like Martha Graham and José Limón and has created works not only for Broadway stages but for the New York City Ballet, American Ballet Theatre, Paris Opera Ballet and Baryshnikov's White Oak Dance Project as well as his own Lar Lubovitch Dance Company. Lubovitch is no stranger to skating either, having choreographed a full length ice production of The Sleeping Beauty starring Robin Cousins and Rosalynn Sumners and worked with John Curry, Dorothy Hamill, Peggy Fleming and the Ice Theatre Of New York.


The Planets, which was originally broadcast by A&E in June 1995 and nominated for both Emmy and Grammy Awards, is definitely a piece of performance art and skating masterpiece worth revisiting... or discovering if you haven't yet. Broadcast Week (at the time of its release) described the production as "spectacular... in its beauty, grace and adoration of the pure flame of imagination... a sublimely elegant celebration of visual, aural and bodily splendour... a remarkably successful cross-fertilization of the popular and high performance arts". There's a certain sense of fantasy and getting lost in the pieces that comes in this particular production that is indescribable and perhaps a little magical. All the best skating is.

Skate Guard is a blog dedicated to preserving the rich, colourful and fascinating history of figure skating and archives hundreds of compelling features and interviews in a searchable format for readers worldwide. Though there never has been nor will there be a charge for access to these resources, you taking the time to 'like' on the blog's Facebook page at http://www.facebook.com/SkateGuard would be so very much appreciated. Already 'liking'? Consider sharing this feature for others via social media. It would make all the difference in the blog reaching a wider audience. Have a question or comment regarding anything you have read here or have a suggestion for a topic related to figure skating history you would like to see covered? I'd love to hear from you! Learn the many ways you can reach out at http://skateguard1.blogspot.ca/p/contact.html.
Posted by Skate Guard Blog at September 28, 2013
Email ThisBlogThis!Share to TwitterShare to FacebookShare to Pinterest
Newer Post Older Post Home