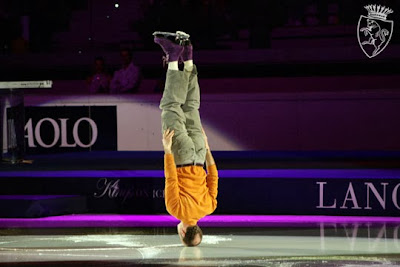 For the first time in a long time, I'm kind of at a loss for words. What do you say to do someone who has done so much GOOD for figure skating justice? Gary Beacom is, in my opinion, one of the most compelling figures to ever have graced the sport. He's also one of the most talented. In art and in life, the biggest successes come to those willing to take risks, push the boundaries and break down barricades. As an "amateur" skater, professional skater, author and most recently through his skating seminars, Gary Beacom has viewed skating through the most fascinating eyes and carved out the most compelling stories on the ice. After twice winning the silver medal at the Canadian Figure Skating Championships and representing Canada at the 1984 Winter Olympics in Sarajevo, he turned professional, touring with Jayne Torvill and Christopher Dean, studied acting, won the U.S. Open and World Professional Figure Skating Championships, toured with Katarina Witt and Brian Boitano in their 'Skating' tour and toured with Stars On Ice, Champions On Ice and performed in countless other shows and tours, performing programs that ranged from improvised to intricately choreographed one of a kind pieces to programs that featured skates on his hands, complex compulsory figures, bird calls, headstands and just about everything else you could possibly (not) imagine. I don't know about you, but if I'm being 100% REAL, I'd rather watch THIS than any of this generic business any day. Gary is EXCITING to watch. In short, Gary Beacom is a skater that you just have to stand back and be in awe of. We were connected through Dawn Ann Webster, a former Disney On Ice skater from Toronto who is now helping Gary promote his skating seminars throughout Canada. Thank you Dawn! It was my absolute thrill to have chance to talk with Gary about everything from some of his most compelling creations to modified skates to the IJS system, his time behind bars and his writing. This interview was a complete dream and I'm confident you'll find it as fascinating as I did:

Q: I'd like to start by saying that you are one of the compelling and exciting skaters I've ever seen on the ice. Your individuality, fearlessness and passion for skating YOUR way not only inspired me during my own skating days but has inspired many people worldwide. Where did you find the courage and strength to decide that you were not going to play by anyone else's rules?

A: Thank you, Ryan! Such compliments spur me on! Ironically, I am a stickler for rules. It is because of respect for and familiarity with rules that I have been able to innovate with confidence and courage.

Q: You twice won the silver medal at the Canadian Nationals and represented Canada at both the World Championships and the 1984 Winter Olympics in Sarajevo. Looking back on your "amateur" career, what are your favourite memories?

A: I don't tend to have favourites. My amateur career was more about slow and steady progress than milestones. My back change loop at Olympics was a personal achievement in spite of the temperamental conflict that ensued. It was the only loop in the competition that came close to rulebook specs. Yet, I suspect because it stood out and because I was reputed to be a renegade, I was not justly rewarded.

A: I quit amateur competition abruptly mid-season in 1984 and joined Jayne and Chris' World Tour. I love the challenge of competitive skating because it drives one in the direction of (elusive) perfection. However, I felt manipulated. Persecution that goes with the territory of innovators who challenge the status quo drained my spirit, and with it my motivation to train effectively. My performance of Song Of Songs in Montreal, with full standing ovation, comes to mind as a career highlight. Recent performances have been the most personally rewarding because I have continued to develop skills and art. Pro skating has waned in popularity along with amateur skating. It is hard to believe Champions On Ice folded so soon after such glory in the 90's. Amateur skating is no longer a breeding ground for spirited artists. Figure skating is a microcosm of oppressive society. We have more and more complex rules commensurate with the myriads of statutes that the legal industry foists upon us. The "vehicle" itself is not the crux of the demise in popularity.

Q: The longest solo was the 22 minute commissioned composition Between Steel And Ice. Alberta Biography, choreographed by the late Frank Nowosad using bird call recordings. It was undoubtedly the most bizarre "music" I performed to. I do not show favouritism for works, although I have had some notable flops such as the backpack propeller piece that Toller mocked in Ice Cream! I would love to skate to Philip Glass, but have so far been daunted by a monumental vision of possibilities.

Q: I think the first performance of yours I ever saw was you and Gia Guddat skating to "I Think I'm Losing My Marbles" with skates on your hands in those black and white spandex outfits and I thought it was the coolest thing I'd ever seen. Where did you get the idea and how difficult was it to translate it to the ice and make it work in practice?

A: The idea popped into my head when I was goofing around one evening with a Charlie Tickner death spiral. I generally take an open mind along everywhere. It occurred to me that skates on hands could be more fun! All of my choreography originates on ice.

Q: You have penned two books - Gary Beacom's Vade Mecum and Apology, which talks about your experience with the U.S. justice system and your experience in prison. What did you learn most from your time behind bars that has made you a stronger person and how cathartic was writing about it?

A: I intimately learned chess, table tennis, and eight ball. What passes for law nowadays repulses me more and more with almost every confrontation with police, courts, and lawyers. Disgust supplants naivete. The purpose in writing Apology was not to purge or avenge, but rather to play a part in raising awareness of what liberty actually is and why it is critical to our spiritual and economic health.

Q: I always loved and respected your ability and decision to improvise your pieces, especially in competition. Why don't more skaters take this risk and what can improvisation to music do to really help skaters grow?

A: I have always enjoyed improvisation. It is a gratifying test of technical fundamentals, repertoire, and imagination. The vitality and freshness of extemporaneous performance is difficult to emulate with choreography. It would be next to impossible to maximize points skating by the seat of one's pants under the Kafkaesque IJS. In all fairness, improv is more art than sport.

Q: Where did you get the idea for "I'm Your Man" and did you ever think it would be the huge success that it was?

A: I'm Your Man came together very spontaneously during a playful mood one day on the ice, much to the credit of Leonard Cohen, and continued to develop artistically with each performance. Malevolent Landscape, by contrast, was a time-consuming choreographic undertaking which advanced purely by technical rigour.

Q: You have customized your own skates. When did you get this idea and what were the biggest challenges?

A: I filed the sides of the soles down to allow deeper edges. I have recently pondered that free skates with heel truncation (like dance blades) would give more clearance on cross-overs and other footwork. Extended heels often contact the opposite boot or blade. Also, bottom toe picks are mostly crutches and could be dispensed with.

A: I have never had favourites or idols, nor have I witnessed all skaters of all time. Kurt does spring to mind as an extremely adept performer. Allen Schramm made a mesmerizing impression on me back in the day. John Curry would nicely round out the list. All were masters of musical interpretation.
Q: If you had to change one thing about the current IJS system, what would it be? Do you think it has helped or hurt the sport and would you ever compete under it yourself?

A: Scrap it. Though it has spawned intricate and demanding footwork and a myriad of spin variations, it has rendered much figure skating vernacular obsolete. It is furthermore cumbersome to implement, perplexing to lay audiences, and a failure at doing what it purports, namely eliminating bias. Having said that, I reckon I would fare better under that system. I have pondered entering an adult competition some time for the fun of it.

Q: What is the secret to your longevity and relevance as a professional figure skater?

A: There is no secret. Gary Beacom's Vade Mecum has been in print for eight years! Hahaha... I take care of myself with a wide variety of high quality foods and supplements so that I have energy, motivation, and stamina to train. I have been skating mindfully for hours and hours for decades and decades. I live an experimental and free-spirited life with diverse experiences to shape personality, fuel inspiration, and reach out to folks from varied walks of life.

A: Most people don't know I suffered nocturnal enuresis well into my teens, probably owing at least partly to sleep depth. Upon surmounting the condition, I developed mild chronic paruresis. (...then again, most people probably don't care!)

Q: You currently offer seminars and workshops to skaters that focus on propulsion, posture, edges, improvisation and teaching skaters to really delve into their craft. How would you describe a typical day on the ice with you?

A: There is no typical session, Ryan. Every seminar is an adventure. I use awareness and intuition to tailor workshops to the "here and now". Passion and experience are guiding forces. I introduce concepts and encourage skaters to harness imagination to apply and explore. The method fosters self-motivation, a deep understanding of techniques, and enjoyment.

Q: If you had to collectively give everyone in figure skating a single piece of advice, what would it be?

A: Safeguard soul by embracing virtues: truth, justice, and beauty. Shun superstition, venality, and degeneration in life and in sport.

Skate Guard is a blog dedicated to preserving the rich, colourful and fascinating history of figure skating and archives hundreds of compelling features and interviews in a searchable format for readers worldwide. Though there never has been nor will there be a charge for access to these resources, you taking the time to 'like' on the blog's Facebook page at http://www.facebook.com/SkateGuard would be so very much appreciated. Already 'liking'? Consider sharing this feature for others via social media. It would make all the difference in the blog reaching a wider audience. Have a question or comment regarding anything you have read here or have a suggestion for a topic related to figure skating history you would like to see covered? I'd love to hear from you! Learn the many ways you can reach out at http://skateguard1.blogspot.ca/p/contact.html.
Posted by Skate Guard Blog at October 12, 2013
Email ThisBlogThis!Share to TwitterShare to FacebookShare to Pinterest
Newer Post Older Post Home