Winter Sports Without The Winter: Skating In Africa 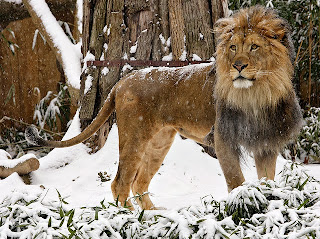 Figure skating is not the sport it once was. At the very first ISU organized World Championships in 1896, only skaters from three countries - Germany, Austria and Russia - were represented. Now, figure skating is truly an international sport, with the International Skating Union having member federations on every continent except Antarctica. You never know, those penguins might get organized... then look out! At any rate, for decades competitive skating has been dominated by North American, Russian, European and (in recent years) Asian skaters. The last place you'd probably think to look for ice time is among the Giza pyramids, the Ngorongoro Crater, Victoria Falls, the Nile River or the Sahara Desert, but Africa is a continent not only with a promising future in the sport but an interesting past.

In 1909, Mrs. Dale Lace was responsible for starting Africa's very first ice rink in Johannesburg, South Africa. The rink was situated on Eloff Street in Johannesburg at the South African Party's club. In 1937, the South African Ice Skating Association was founded and The Wembley Ice Rink built in Springfield, Johannesburg. The following year, it became the first ISU member on the African continent. Its first president, Professor J.Y.T. Greig presided over the organization which ruled both figure and speed skating until 1950. Early competitions were mainly held in ice dancing although singles and pairs disciplines were contested at the country's first National Championships in 1947. In 1955, South Africa's second rink was opened in Durban. Sadly, in 1968 Margaret Betts and the pairs team of Glenda and Brian O'Shea were the final skaters to ultimately compete at the World Championships for over twenty years when South Africa was revoked the right to send skaters abroad to international competitions due to the countries apartheid and racial segregration of the era. 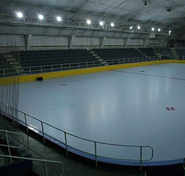 It wasn't until 1970, when more rinks popped up around South Africa that the South African Ice Skating Association became a true governing body of the sport with headquarters in Natal. In 1973, history was made when the first international competition was held in Johannesburg and a National Judges Committee was formed. Two years later, the first Skate Safari international competition was held, with competitors from Austria, Great Britain, Luxembourg, West Germany and the U.S. all competing against South African skaters. However, it wasn't until 1992 that South African skaters were readmitted to international competition for the first time in 23 years after being banned. The first skaters to compete at the World Championships after the ISU lifted the ban were Dino Quattrocecere, Juanita-Anne Yorke and ice dancers Fiona Kirk and Clinton King. In 1994, speed skating split from SAISA and the South African Figure Skating Association became its own entity. South Africa was represented in both the 1994 and 1998 Winter Olympics in figure skating but unfortunately no South African skaters have qualified to compete since. Reigning Senior Ladies champion Lejeanne Marais is the sole skater representing South Africa competing at the 2013 Nebelhorn Trophy Olympic qualifying event and hopes to chance all that for that the better.

South Africa's Shirene Human competing at the 1998 Winter Olympics in Nagano, Japan
The second African nation to gain membership to the International Skating Union was Morocco, and the Association of Moroccan Ice Sports has already started fielding competitive skaters. Annual National Championships were established in Morocco at the MEGA MALL Ice Rink in 2010 and a Moroccan Figure Skating Cup competition has been held since 2011. Aya Sayah and Hamza El Guerrab won the 2012 Figure Skating Moroccan Cup held in Rabat on the 9th of June, 2012 in the Junior Ice Dance category. Senior ice dancers Asmae Samri and Nicolas Salicis made their international debut at the 2012 ISU Adult Figure Skating Competition in Oberstdorf, Germany, finishing 5th in the Masters category. In March 2013, Moroccan singles skaters Hajar Rakik, Sarra El Oufir and Kenza Mahmoudi travelled to Cieszyn, Poland and gained valuable experience competing at the ISU World Development Trophy.


Morocco and South Africa are not the only African countries to have ice rinks... and skating programs available. Tunisia's first ice rink to open was The Blue Ice complex in the Yasmine Hammamet resort. Egypt has rinks in the Ancient Egypt Mall in Cairo, at Family Land in Maadi, Helwan, and at Genena Mall in Cairo. Côte d'Ivoire has a rink in the Hotel d'Ivoire in Abidjan. The largest ice rink in Africa is the Solar Ice Rink, which was opened in the Panari Hotel in Nairobi, Kenya in 2005. 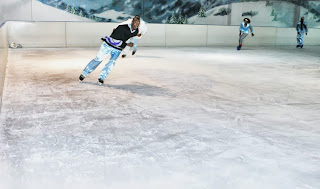 Skaters at the Solar Ice Rink in Nairobi, Kenya

Unbeknownst to much of the rest of the world, figure skating is truly a sport practiced in all corners of the earth these days. There are skaters from Grenada in the Caribbean, Brazil, Argentina, New Zealand, India, Hawaii, Iceland, Africa and everywhere in between all getting out on the ice and pursuing their passion. Who knows? The 2018 Winter Olympic Games will be in Pyeongchang, South Korea and that's a long time from now. Anything can happen. Even the unexpected.

If this feature was your kind of thing, stay tuned to http://www.facebook.com/SkateGuard and http://skateguard1.blogspot.ca for more skater interviews as well as articles, commentary and special features! You can also follow me on the Twitter at http://twitter.com/SkateGuardBlog for skating tweets and whatever else I've got on the go!
Posted by Skate Guard Blog at October 09, 2013
Email ThisBlogThis!Share to TwitterShare to FacebookShare to Pinterest
Newer Post Older Post Home